When I was a social worker/home visitor and got paid for playing with toddlers, I worked in a community that was predominantly Spanish-speaking.  This means that I learned a couple of songs in Spanish that are typically sung in Puerto Rican families (at least in Holyoke and Springfield, Massachusetts) to their little ones.  “Que Linda Manita” and “Pon Pon Pon,” are the ones that have stayed with me.

One of the interpreters with whom I worked twenty-plus years ago taught me a Spanish version of a song that I grew up loving: The Itsy-Bitsy Spider. I was so happy to pass onto these children who showed delays in their speech or in their cognitive skills, even if it wasn’t of their native culture.  They needed as many ways to play and sing and talk and move — the work of trying to catch up in their development. Combined with the same hand movements, “La Pequeña Araña,” was fun.

It was also a hit with both child and parent, though my guess would be that it wasn’t integrated into family life unless I was there to sing it. There needs to be a lot of repetition and external reinforcement to remember a song that is new and not of one’s culture of origin.

When I was recently in Myanmar, I got to spend a short time with a group of about eighty children living in marginalized communities, some of them on the street, some of them in families whose situation requires their children to earn money by peddling wares on the street rather than attending school.  I watched as the leaders of this ministry to street children read a story, then led them in song paired with movement.  The kids’ eagerness and participation were pure delight. One of the songs they sang was surprisingly familiar.  It wasn’t the Itsy Bitsy Spider.

It was the Hokey Pokey.

The Hokey Pokey? In Myanmar?  It was not in English, but was in Burmese.  And it wasn’t really the Hokey Pokey, but was something that sounded like the “Hootchie Cootchie.” Even with a different name, the rest was all the same — the tune, the right foot in, the left foot out.

We were supposed to be adult observers, but several of us could not help ourselves – I can only speak for myself, but I know I became an adult participant, putting not only my right foot in, but my left one, and both my hands at the appropriate times.  Not knowing whom I might offend, I shook it all about.

Myanmar, also known as Burma, was colonized by the British Empire. So when the question of just where did a Burmese version of this song come from, I had my suspicions.  I wondered for a hot minute if it was possible to have originated in this tropical land, but then gave it up as likely.  Since then, I have done some research at the bastion of internet source-to-end-all-sources – Wikipedia — into the history of the song.

It turns out that the origins of the song are contested. The song is attributed to the middle of the twentieth century at this or that resort serving families with a need for fun-loving, clean activities. Or it comes from the century before, in this or that country in the United Kingdom – Ireland or Scotland. Seems like in most English-speaking countries with any tie to England, there is some version of a song that asks for various limbs and one’s caboose to be in and then out and then shaken (not stirred).

You do the Hootchie Cootchie and you shake it all about –that’s what it’s all about.

Some call it the Hokey Pokey (United States, Canada, Ireland, Australia). Some call it Hokey Cokey (UK). Or Hokey Tokey (New Zealand). Apparently in the Phillipines it is called the “Boogie Boogie,” which is a phrase I might have mistaken when I thought the kids were singing, “Hootchie Cootchie.” Maybe.

On Youtube I found this clip of kids, in Myanmar, doing this very song and dance. Whoever is leading them definitely says “Boogie Boogie.” And certainly, the Phillipines is considerably closer to Myanmar than England, and just about as far away as Australia. So who knows where the Hokey Pokey came from and how it got to Myanmar? I don’t.

I do know that music has the ability to travel, to show up in new languages and in new cultures. Music has the capacity to resonate across cultural boundaries, which makes it a powerful tool for peace-making.  This is a good thing.

It is easy enough to find music from one place and time, from one culture, in another place, another time, another cultural context. Sometimes, the path from there to here is impossible to trace.  Sometimes the direct path is lost.  Like it seems is true of the Hokey Pokey in Myanmar.

Sometimes the path is intentionally obscured and misappropriated. One culture’s contribution to the world is lost and another takes credit for it, or profits from it.

Sometimes, though, we can trace the path of a song, or a dance, from its cultural home to where it has landed. Like the African American spirituals that are in some liberal religious hymnals. When we trace its path, and make sure it is not lost, that its original context or purpose is misconstrued or misappropriated, we live into right relation with our divine purpose, that culture, its people. And with ourselves.

And that, baby, is what it’s all about. 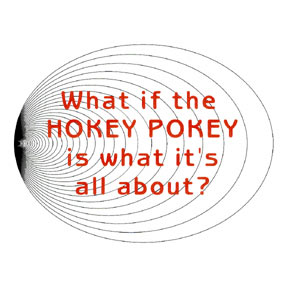 (This post inspired by attending a workshop on music and worship conducted by Matt Meyer, who advocates knowing the history, origins, and contexts of songs as a skillful way to engage in multi-cultural and cross-cultural interactions and worship. He is a talented musician and Unitarian Universalist lay leader who inspires people to be our better selves and to be in right relationship with each other.)