There is a line from an Anne Sexton poem. I have used it here and nearly everywhere I have been given the chance:

Surely, that was my resplendent experience during my two weeks of travel and study in the Southeast Asian country of Myanmar.  Along with twelve others as part of a course at Andover Newton Theological School, we spent a fornight studying Christian-Buddhist Dialogue (though I am not sure that is the most accurate description).

I choose not to call Myanmar (also known as Burma) a nation, as I learned that it is not “there” yet (if ever) – the colonial boundaries drawn by the British Empire in the 19th century don’t ring true to its citizens, who identify with their ethnic group and/or their region.  Only for us Westerners was the question, “Is it Myanmarian? Myanmarese?” because for them, they are from Chin State, or they are from Shan State; they are Kachin or Kayin, or any of the other 135 ethnic groups and subgroups present in this country.

So there is an abundance of ethnicities in Myanmar but this is only one of an abundant variety of abundances I encountered there. I would like to share with you a few windows into abundance and generosity.

We spent most of our first week being the guests of two Christian seminaries there. One was Myanmar Institute of Theology – MIT. The vice-president, along with one of the lecturers, acted as our guides while we were in Yangon – hiring the best, kindest, and most loyal drivers ever; explaining this pagoda or that important structure; ensuring we had stimulating lectures by their faculty; allowing us to conduct worship with their student body; even accompanying little ole me to the large Aung San market (named for the historical father of Burmese independence and actual father of Nobel laureate, Daw Aung San Suu Kyi) to help me bargain with the peddlers.

The other was the Pwo Kayin Seminary, a school that serves those who are Pwo Kayin, one of those ethnic groups of which I spoke earlier. This is not done in an exclusivist way – only for us! You stay out! – but in a survivalist way, as in “our culture, language, traditions are being erased and forgotten, so we will come together to keep them alive.”

The folks at Pwo Kayin Seminary gave so much of their time and their life to us – the president himself cooked us lunch, while three of the faculty cooked us dinner. When we arrived, the study body, dressed proudly in their traditional woven fabrics, sang and danced to welcome us (and we sang and not-danced to thank them for their warm welcome). 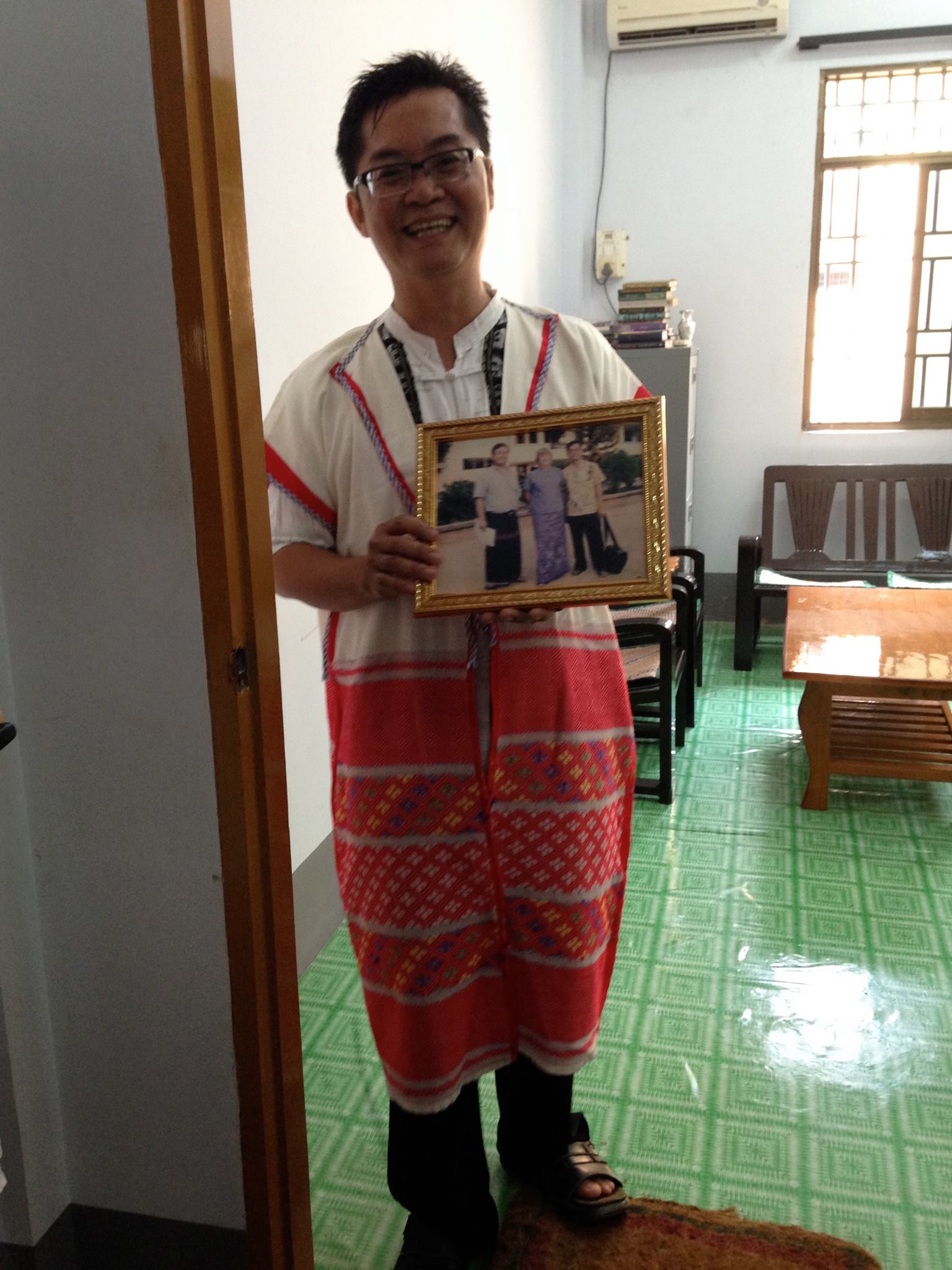 On another day, the president – whose name is Soe Thiha — accompanied us to a remote Pwo Kayin village where the villagers made us a luscious lunch, likely using the best food they had at hand. It was delicious and their attention to our comfort (fanning the flies away), as well as their curiosity about who we were, was lavish. The oldest man and oldest woman of the village made sure to spend time with us, and all homes were opened to us to see what life is like there, in thatch-roofed home on stilts that survive the floods of rainy season, sharing photos of their family members or other objects in their homes of which they were proud. By American standards, this would be called an impoverished village. Their wealth and abundance, as well as generosity, cannot be measured in economic terms.

Soe Thiha also accompanied us on one of our two trips to the famous Shwedagon Pagoda in the capitol. This is a major Buddhist pilgrim site, not one from his religious tradition. There was a sense that we should not go without accompaniment – not because of safety but because this how one attends to guests, regardless of how busy one is, regardless of how many important tasks await. The generosity of companionship was astounding, and given the choices I make in my own life back home, a bit discomfiting.

In our second week, we spent time at a meditation center that is attached to a Buddhist monastery. When the Assistant Abbott in Charge of Foreigners met with us the first of our three nights at the Chanmyay Meditation Center, we were under the impression that was our one and only opportunity to meet with him. Because we were not only foreigners (there are many of those who visit the monastery), but non-Buddhist visitors, we asked for some – ahem – adjustments to the dogged meditation schedule that we found so daunting.

A soft-spoken man with an endearing tendency to close his eyes and touch his upper lip while talking, Bhanti Nyana Ramsi, considered our out-of-the-ordinary requests – that we ring a chime every half hour to help give some measure to our day of meditating from 4:30 am til 9:00pm and that we do silent yoga to support our bodies unused to sitting still for such long periods of time – he considered and granted them. 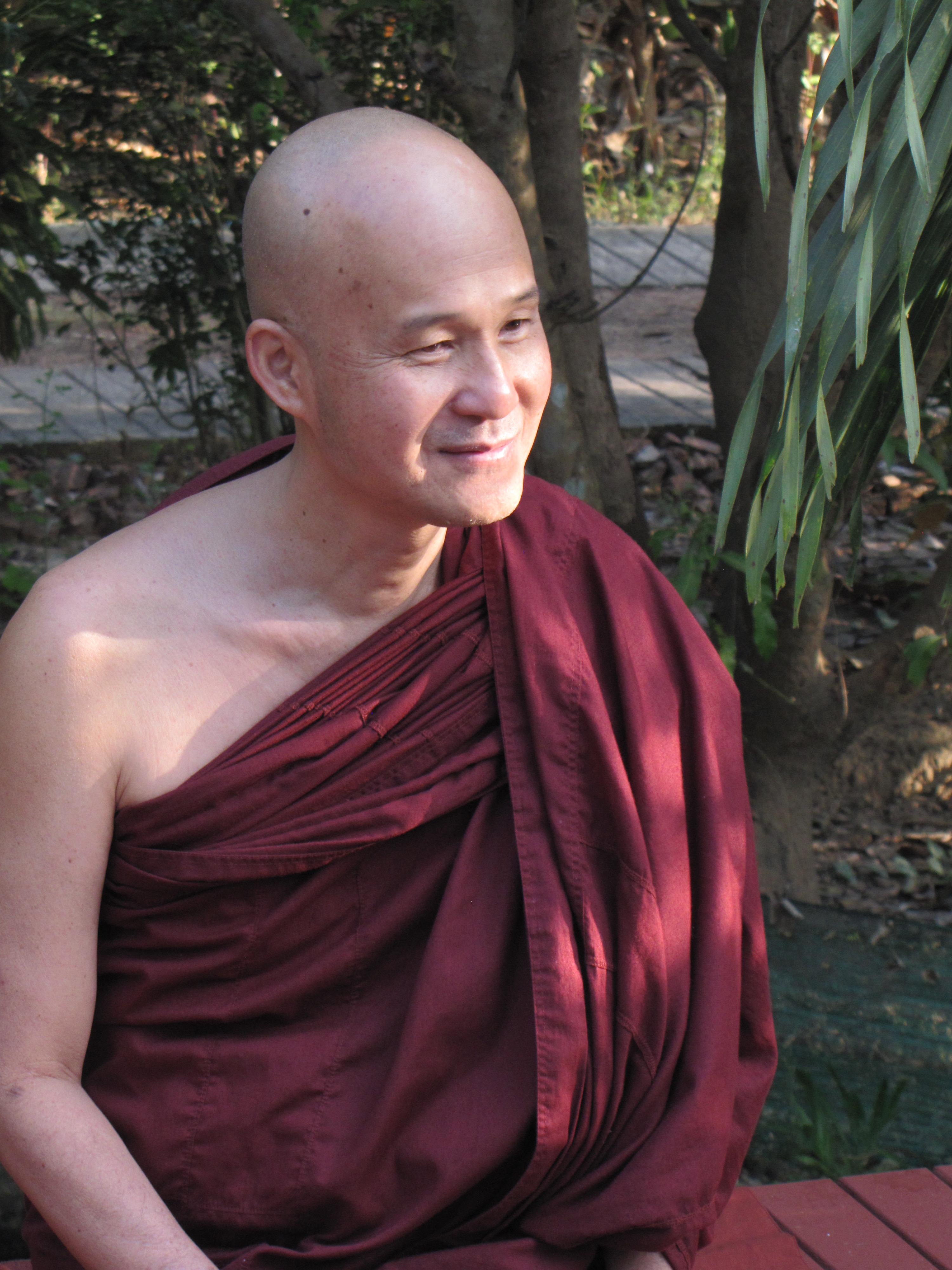 Nyana Ramsi, Assistant Abbott in Charge of Foreigners at the Changmyay Meditation Center

Bhanti spent over an hour with us each evening, providing opportunities for us to ask questions about our meditation practice, as well as Buddhism in general. No question fazed him, a beautiful embodiment of equanimity. One member of our group, whose theology places homosexuality in the category of sin, asked Bhanti about Buddhism’s take on same sex marriage. To Bhanti’s credit, before acknowledging that there is a long history of Eastern philosophy finding homosexuality to be against nature, he started with the fundamental response in judging all things: is it beneficial, or is it not?

There was so much abundance flowing in our interactions not only with our hosts, but among us as co-travelers crossing borders not just of national boundaries, but of interfaith differences among us, that that man, who asked that question built on a theology so very different than mine and ultimately hostile to my own life – that man and I had some very deep talks throughout the trip. We now consider ourselves brother and sister. Such was the abundance.

There are other stories of generosity and abundance to tell: how we communicated across language barriers, with strangers and new friends, smiling, delighting. How one random mother in a market place acquired a bottle of bubbles for her three-year-old daughter so that the girl and I could play a back and forth game of bubble blowing. How the workers at the entrance of every pagoda kept the long skirts – called longyis – hidden away for the foreigners of every gender who arrive wearing shorts or skirts above their knees to make sure that people are not turned away for their dress considered disrespectful in such holy places.

My heart is flooded with these and other memories. I pray that they stay with me, vibrant and haunting, that I may live into their inspiration.