The last Sunday of the old year I spent at my internship congregation. I led what they endearingly call ‘Sandwich Worship.’ Traditionally, the Sunday after Christmas, worship takes place in the vestry of the building. Formal worship is truncated (and can hardly be called formal) and is primarily built around Howard Thurman’s beautiful text, “The Work of Christmas.” After this is read aloud, and a few more liturgical elements are conducted, the people of the church (I know, that is a redundant phrase) set about making meals for people living in local shelters, that are then delivered by some of those present.

Because it was my first of these famous Sandwich Worship services, before we got to the Thurman reading, I asked those children present if they could tell me about the what and the why of Sandwich Worship. So aptly, I was schooled in what to do by the children of the congregation.

Fast forward only one week, but a week that involved a literal trip half way around the world, to Southeast Asia, to Myanmar, a country of either 60 or 51 million (they aren’t sure yet because they are still in the midst of conducting their first formal census in a very long time), the poorest of all the countries in this region of the world, a place that until 2012 was held mostly closed to outsiders because of the iron-grip of the ruling military junta (and reforms are in process — the fact that we are here is proof of that — but they are slow and they stall and are so far unjustly uneven).

We are being hosted by two Christian seminaries while here. One of them is Myanmar Institute of Theology (MIT), which is connected to our primary human host, guide, and friend, Rev. Dr. Maung Maung Yin whose church we attended yesterday. The ministries of the church are wide and impressive — truly, the good works enacted are here — including a free health clinic accessible to anyone, regardless of “race or religion,” so we saw Buddhists, and Christians, and Hindus, and Muslims, from age three months to 91 years being served there. In the afternoon, we spent time as part of their ministry to street children — very young children who either have no parents or home, or have a home but need to spend much of their time hustling/earning for money to help support their families.

At this program, the children have a free hot meal, stories read aloud to them, and lessons taught; they get to sing and move their bodies the way children are supposed to (they have a Burmese version of the “Hokey Pokey” — same movements, same tune, different language — I, of course, joined in, which the kids thought hilarious). Our crew brought them books and, instead of asking them the what and why of our being together (something not possible with the language barrier), I did get to read aloud a book to them.

From among the ones we had brought, I chose “Goodnight Moon,” and in the spirit of the participatory nature of the universe, we did it interactively, which was an absolute hoot. If you want to participate in delight, then ask 80 street kids in Yangon who don’t know (much? any?) English to repeat, “Goodnight/ old lady/ whispering hush,” complete with hand gestures and be blown away at how well and how LOUD they will do it. Complete and utter delight.

And in between the clinic and the kids there was worship. The vast majority of it was in Burmese, but one of our guides — a lecturer from MIT, his name is Mana — gave us short written summaries of the 40-minute sermon as it progressed. Plus, Rev. Dr, Maung Maung Yin would generously offer some English phrases sporadically, giving us a sense of the topic and his message. The last and first Sundays of any year is a big attendance time for churches in Myanmar – kind of like Christmas and Easter in the States, when people who generally don’t attend church show up and swell the ranks. In this church’s case, instead of the typical 800, there were 1000 people there yesterday morning. (And this is not the biggest church in Yangon, I am told.)

When the song of the angels is stilled,

When the star in the sky is gone,

When the kings and princes are home,

When the shepherds are back with their flock,

The work of Christmas begins:

The message of the sermon was “New Year, New Hope.” The organizing element of the sermon was, in fact, Howard Thurman’s text. The very same one that my congregation back home used just last week. Rev. Maung Maung read it, in English, one line at a time, then would preach on in Burmese. It is an inherently powerful piece, but this new context lent special poignancy and inspiration.

To find the lost,

To heal the broken,

To feed the hungry,

Given what is taking place in this country, how it is trying, clumsily, at times unskillfully, with some genuine determination and with some despotic clinging to power, who cannot hear the line, inspired by the Book of Isaiah, without their breath catching,

To release the prisoner,

To rebuild the nations,

At least, that is where I lost my breath. But it could have been any of these lines.

To bring peace among brothers [kindred]

To make music in the heart.

Not just lines from a beautiful text, but realities enacted here in hope, ever renewed, of a new and just world, of making the kingdom of heaven here on earth. Though I was a guest among Baptists this day, my Universalist heritage resonated with this ardent desire, and my Unitarian Universalist “deeds, not creeds” sensibilities were engaged fully. And to that, I say, 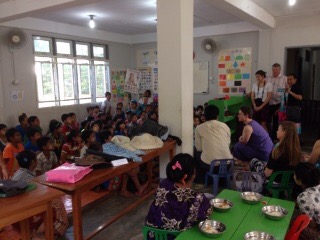