I am beyond exhausted and yet feel the desire and the duty to blog. Our days are overfilled here. There is the theoretical option to opt out of an activity but few of us find that easy. None of us expect to find ourselves in this amazing, new-to-us place half way around the world, so we press on, we opt in, we quip our version of “you can sleep when you die,” which in our case is on the airplane home.

Or, during some of the six-plus hours we are scheduled to spend on a van tomorrow. We are heading out to a small village that is connected to an ethnic seminary we will be visiting. It will be a very different part of Myanmar than we have seen thus far, which has primarily been based near or in the capitol city of Yangon, which has six million or so residents and fierce traffic, both when it comes to the amount of cars and the length of time it takes to get from one place to the next, as well as the narrow squeezing between and among each other than vehicles and pedestrians do with each other. We have been blessed with able drivers, Mr. Bwa and Min, who have moved us around this big city with determination, calm, and even a good sense of humor.

Yesterday we visited the monastery called Pann Pyo Let in the Bago Division. It is the grounds of an up and coming Buddhist monk (Dr. Ashin Pyin Nyaw Bha Tha) who has established quite a compound that is designed to be ecologically sound and to serve the local community.

We met the over four hundred local children who attend school there — these are village children, ages kindergarten to middle school, whose families cannot afford the government schools. This Buddhist monastery provides education to them for free, also funding the ongoing high school education of 150 kids who have already finished at that school. They also provide a monthly health clinic for the children and has built a beautiful new building to house the clinic, hoping to find the volunteers to staff it on a daily basis to meet the local residents’ needs. 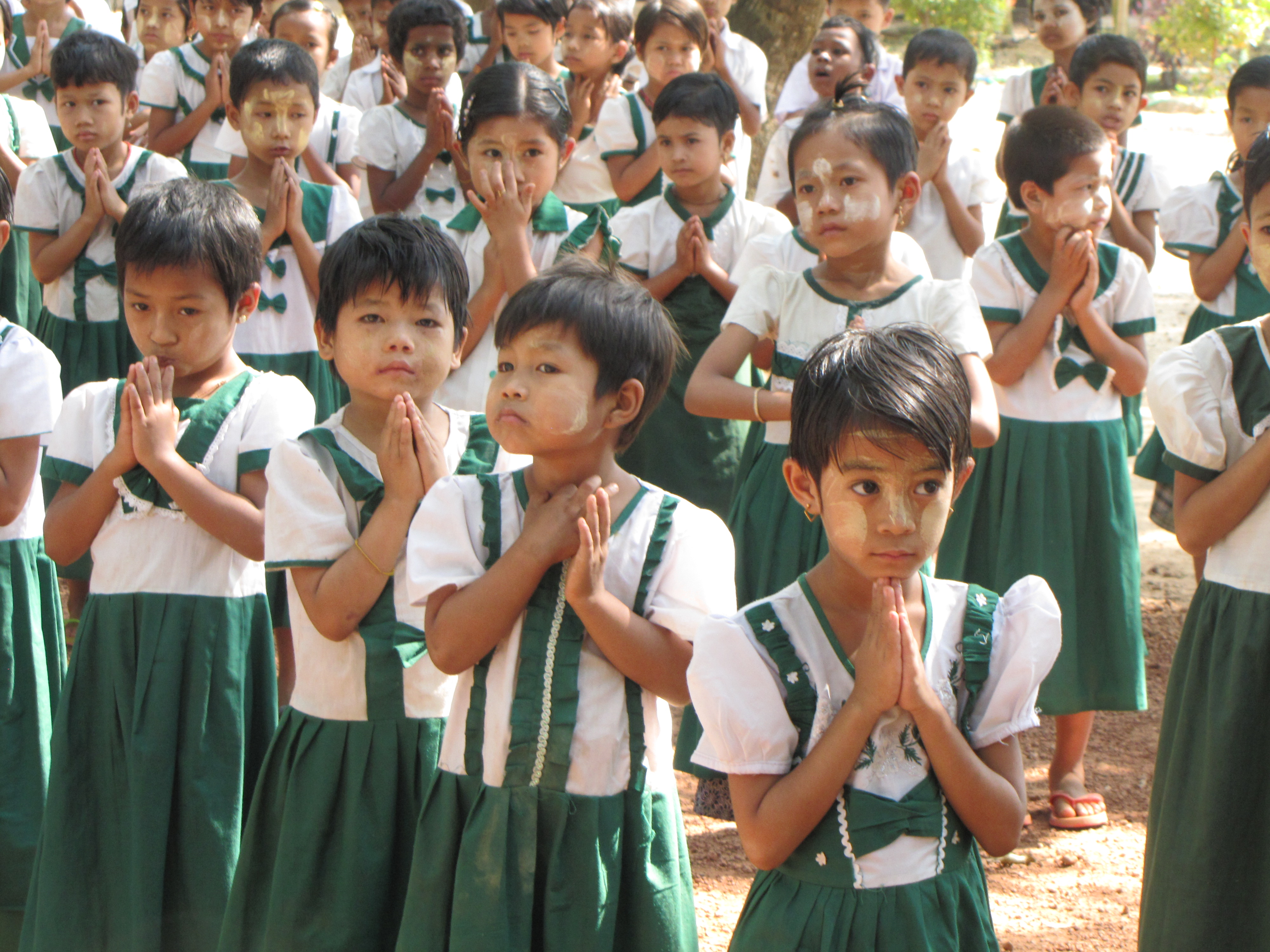 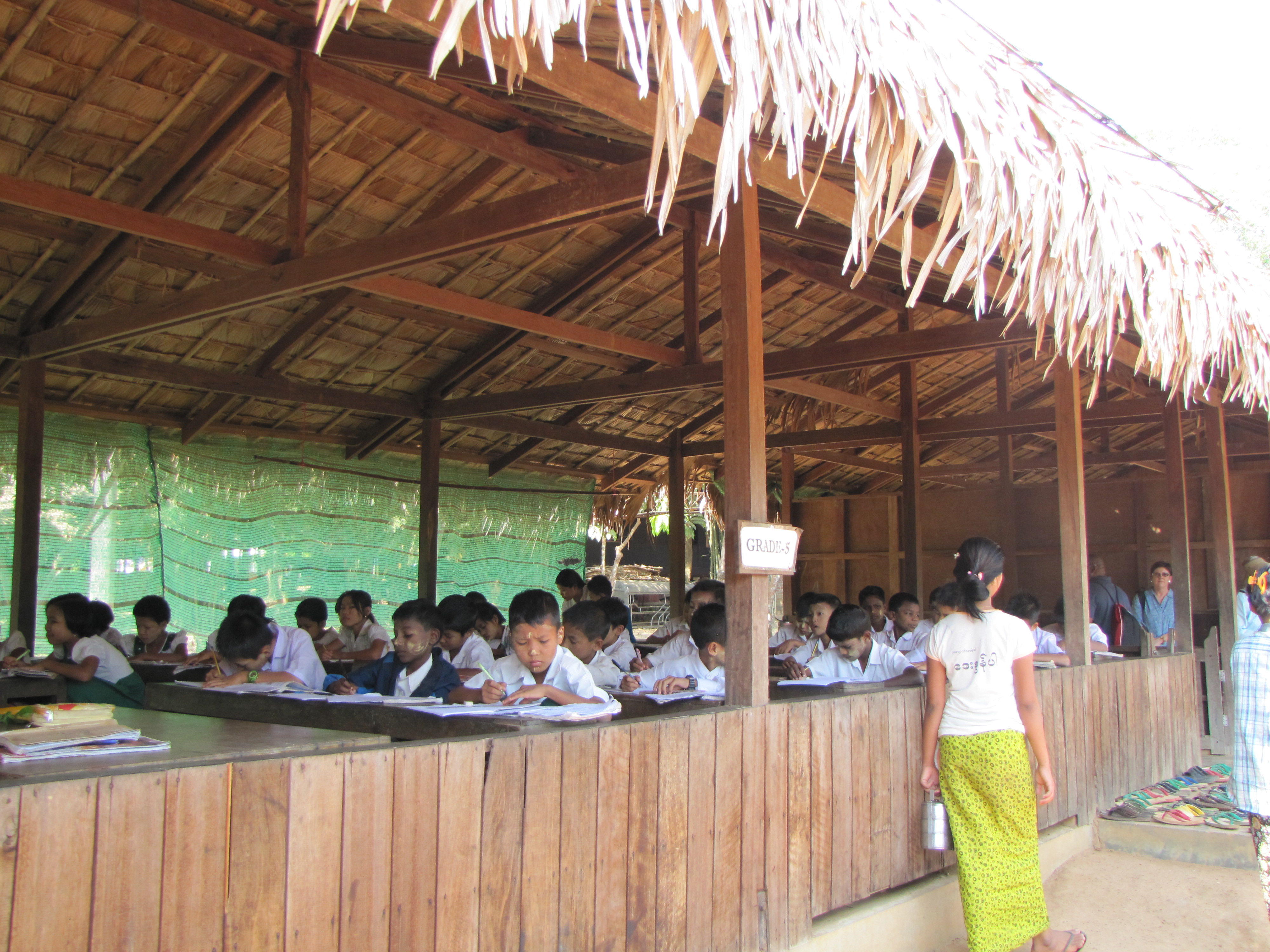 The children provided a presentation for us. They stood in orderly lines, wearing the ubiquitous white and green school uniforms that can be seen throughout the country. Most of them wore the also ubiquitous face paste that both children and adults wear to cool their faces and protect against the sun. They sang the national anthem. They sang a song about obtaining good moral character. They stood patiently by as the headmaster welcomed us, and then someone from our group accepted the welcome and offered thanks. These children were beyond gorgeous and I feel as if I fell in love with each and every one of them.

As they were dismissed from their presentation, we departed that area and toured the compound, including that clinic, and a few of their outdoor classrooms. True to my reputation, I had brought along a sheet of smiley-face stickers. I made my rounds to two of the classrooms, being somewhat disruptive as the children crowded to be near me, stretching out their hands to me as I placed one of these small, shiny sticker on the back of their hand. In one class room, after I had applied a sticker to each of the children, the teacher approached me and indicated I should place one on the upper part of her blouse, which I did with delight.

As we continued our tour, the kids were dismissed and started the long walk home. Each time a cluster of them would pass near where I was, I would peel off from my group and hand out stickers. The first child would look at me quizzically, but because I was an adult, there would be this refusal to decline. They would put out their hand, palm up, and I would gently turn it over, and place the sticker there. Within seconds, the other children were at that child’s side, sticking their hand there, waiting, sometimes patiently, for theirs. They would get one, behold it, then go on their way.

But there was this one gaggle. All girls except maybe one boy. When I indicated that I had something to give them, the first one approached, quite cautiously, actually. I placed the sticker on her hand and she moved away as the others took their turn. All of a sudden, in comes the second hand of the first girl. She wanted two!

I was so delighted with this. It was not an act of greed. It was joyful and mischievous. She struck me as likely a trouble maker, but in a good way. Like someone who would innocently, but pointedly, ask why some unfairness was happening.

I laughed aloud when I noticed what she figured out — that there was no rule of “only one.” Others noticed, and they, too, stepped in for their second sticker. Then someone asked for a third, to be placed on her blouse, so I did that too. Why not? As the poet Anne Sexton writes, “Abundance scooped from abundance, yet abundance remains.” This was especially true, even though my personal sticker collection was decimated.

May we all be blessed with such abundance.