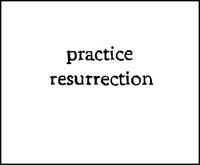 As Unitarian Universalists and liberal religionists, we are not a people who tend to read the Bible literally. We understand that there is a historical context that helps us make sense of what might have been necessary, perhaps even life-saving, several millennia ago, but what no longer holds much water now. The prohibition against mixing fibers in the clothing we wear? Yeah, not so much anymore.

We also understand that the power of the stories from ancient scripture come not because they are factual or historically accurate, but because they convey something true – perhaps even life-saving. There are those in this modern era who do read the Bible literally and assume that those who wrote it from a literal frame of mind. Yet, as John Dominic Crossan, a leading liberal Christian theologian once said,

So it is Easter once again. We are here in the cold chill spring air, the dark seeping away, awaiting the rising of the sun, which some like to play with linguistically and metaphorically, to speak of the rising of the Son – capital S –o-n – and we are asked to reflect upon resurrection.

Berry tells us to put our faith in two inches of humus and to love someone who does not deserve it (sounds mightily like that is related to our First Principle of the inherent worth and dignity of all). The poet tells us to make decisions with the measure would it satisfy a woman about to give birth? The poet exhorts us to outsmart politicos and generals like a fox would.

But just how do we go about doing this? How do we practice resurrection?

I ask this question because it is a good one, but also because regularly I am without an answer. I am still very much figuring out what it looks like to practice resurrection.  And I’m pretty sure that some of what I do looks like I am not practicing resurrection, am not affirming a wider Life. Yes, yes, Wendell Berry has his list and it’s a compelling one (though I am not inclined to put my ear upon a slab of carrion to listen, thank you very much). Still, I do not have an answer. I think that’s why I show up a church every Sunday.

I did not grow up on a farm. My mother high-tailed it out of that country life as soon as she could, but I come from generations of farmers. As a young child, I spent much of my time on my grandfather’s and great grandfather’s ranches (that’s what we called 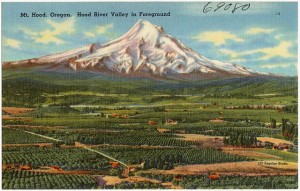 them, but they were orchards, farms producing apples and pears and cherries much more than the stereotypical notion of a Western ranch).

Their life was not an easy life. Ragged sometimes. Lots of economic chaos and struggle and at least in my family, a lot of dysfunction and pain.

One of my cousins – she is amazing, she turned 28 this month — still farms, trying to keep her little patch of land alive and championing the life of the small, independent farmer. Several cousins live in farm country, teaching or conducting some other livelihood, among a people and on land that feeds this nation.

One of these cousins – his name is Sean Borton — wrote a poem that is framed on the wall in the Minister’s Study. It is called, “Counsel of the Mad Farmer.” He wrote it after spending some time with Wendell Berry. It is a rumination on how my cousin tried to follow the Mad Farmer’s advice, how he tried to do things that “won’t compute,” how he tried to practice resurrection:

Yes, I thought, yes, and gave it my best shot

Loved those who didn’t deserve it,

Expected the end of the world and laughed –

Only to find at every turn some scoundrel

Had beaten me to it, twisted it around

Into an algorithm of money, fear, and patriotic hate.

Doubling down, I pulled survey stakes, refused to vote

Walked naked in the woods, Studied the Buddha

Tried once to eat road kill,

But never found the way to Cold Mountain:

“It’s been blasted,” some said, and others,

“Cold Mountain? I think there’s an app for that.”

The world does not make it easy to practice resurrection. It was true in the time of Jesus’ disciples as they spread word that their hope still liveth. It is not easy to practice resurrection in modern times. I think my cousin might have taken the Mad Farmer’s counsel too literally (seriously, he says he ate road kill…). That is his own conclusion, too; his poem ends with these lines:

Years went by before I wrote the Mad Farmer

Again about my trouble with not computing.

He wrote back, “Madness, I remember you. I meant it

More as a metaphor than a simile. Are you home yet?

Did you write this on a computer?”

How do we practice resurrection? What does resurrection look like in this season of your life?

I can’t know what resurrection looks like for you, but here is where my heart finds hope, which is the seed of possibility and thus of resurrection:

Ask yourself: Will this satisfy
a woman satisfied to bear a child?
Will this disturb the sleep
of a woman near to giving birth?

Invest in the millennium. Plant sequoias.
Say that your main crop is the forest
that you did not plant,
that you will not live to harvest.

Expect the end of the world. Laugh.
Laughter is immeasurable. Be joyful
though you have considered all the facts.

The facts tell us that Jesus could not have risen from the dead. Yet the heart of this season tells us it is true, even if it is not factual.  Remember: verb, not noun. Practice over belief.

Since we are a people who believe that revelation is unsealed, that a wider truth continues to make itself known, then it is up to us to keep this truth alive through our collective continued practice of resurrection. More important than what happened two millennia ago is what we are doing today. It is up to us to partner with all that is holy to practice resurrection over and over, again and again, as we move ever closer to building Beloved Community. 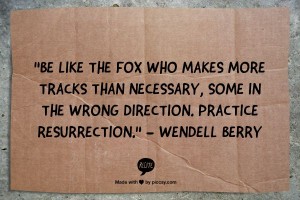