Long ago, in a Galilee far, far away…[nah, just kidding…] 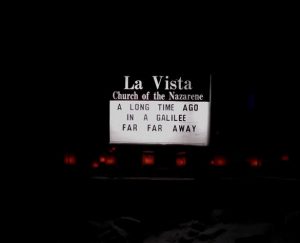 With the story of the birth of baby Jesus, numerous angels make an appearance.

An angel informs Mary she will miraculously bear a child.

Before that, Elizabeth and her husband, Zechariah, were visited too; were told that she, in her old age, would conceive and bear a son (Jesus’ cousin, John the Baptist).

The shepherds, tending their flocks by night, were visited by angels.

And later, to Joseph, twice an angel appears, both times with a message of protection in the midst of danger.

The message of the angels? Be Not Afraid.

You need not believe in angels for this story to resonate. The authors of these stories that became Christian scripture chose, like others of their time, divine messengers.  They did this will full knowledge of their audience, author and audience steeped in their own time and culture.  They chose powerful angels, aligned with a relatively newly monotheistic god who was also nearly always omnipotent.  How else, given how deep and widespread the fear in the land ruled by a violent and mighty tyrant would such a message be believed?

Some of you, beloveds, with your rational minds overshadowing your capacity to be delighted by metaphor, are likely struggling with this parable replete with supernatural entities as it is.  If this is you, let me invite you to substitute for “angel,” the word, “messenger.”

In order to hear this message, to discover its possibility, I have found that I cannot be like Elizabeth, or Mary, or the shepherds, living my life passively until a supernatural messenger appears.  I have found – more and more – that I must actively seek out angels, messengers, sources of hope and assurance. I must co-create a message of hope.

And I have found that I must be exactly like Elizabeth, and Mary, and the shepherds: I must be willing to open my senses to that which at first seems unlikely, even impossible; open to that which my current inherently limited perspective does not allow me to take in.  It is not I who must go out seeking the message, but it is I who must be open to a messenger that I might not, at first, recognize.

We humans need all sorts of messengers. Metaphorical and literal, representative of the whole diverse human family, heroic and humble, nearly perfect and deeply flawed.  Why do you think there are so many super hero movies these days?  We go looking for angels we can believe, messengers whose integrity and confidence we trust to inform us, to inspire us, to steer us right, to comfort us, to motivate us, that we might be not afraid. 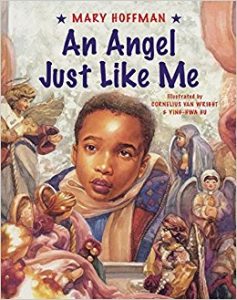 It’s the children in our anthem this evening, so beautifully rendered – thank you – who in “each different place will see the baby Jesus’ face like theirs.” It’s Tyler looking for an angel that looks just like him in the picture book by Mary Hoffman. That book was published twenty years ago.  Just two days ago, I was at the mall just down the road, buying gifts with money from the Ministerial Discretionary Fund for a family of five in New Brunswick, that single mother raising four on her own (oh, my heart goes out to her, having raised my two on my own), she a Black mother raising Black children in a nation that still seethes with racism, making it hard to see one’s own image reflected as beautiful, as angelic, I was at the mall shopping for this family and I saw many, many angels – just like Tyler – figurines and wall hangings and wrapping paper – and all of them had pale skin like mine, not like Tyler.

The littler girl in that family of five likes doing arts and crafts, so I went to the Toys R Us looking for something that would bring her joy when she opens presents tomorrow morning.  All the packaging for such things reflected girls – and only girls, as if boys don’t like that kind of thing, oh the gendered toy packaging of our age makes me furious – and reflected mostly white girls, with a few possibly Latina girls here and there.  No Black girls.  Or Asian girls, for that matter.

Our little friend, Tyler, searched for an angel who looked just like him. He settled for a star, though beautiful and universal, still it was not specific enough to speak deeply to him, to that place of all human need.  He needed an angel that he could recognize; an angel at the top of his family tree reflecting his essential human divinity inside him, given the too many cultural and psychological messages that obscure his connection to all our divine origins, our connection to the Original Blessing, what is also called Buddha Nature residing within all sentient beings, what Unitarian Universalists call the inherent worth and dignity of each person. 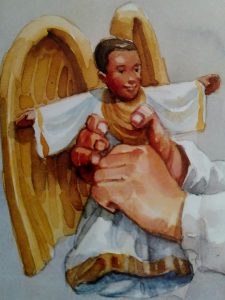 Be not afraid. We need a diversity of angels to deliver this universal message because we all need to hear it, have it nestle and take root within each of our hearts.  Tyler needs to see a Black angel and frankly, so do I.  So do we all.

In the time of Jesus’ birth, there was legit’ reason to be afraid.  While the vast majority of the story of Jesus’ birth is mythology, we do know that the tyrant Herod, was real – and by tyrant, I mean power hungry to the point that he had members of his own family killed.

The people needed to hear that hope was possible; that hope was on the way. They needed the dreams of the wise ones to be influenced by angels so that they avoided torturous Herod.  Joseph, the father of Baby Jesus, needed angels to whisper into his dreams: Go! Now! Escape with your family! Become refugees that you might find safe harbor, that you might find refuge, might receive sanctuary.

There are far too many echoes today of this need and this message.  We live in a time when fear is alive and well in the land.  We all need the message of safety, of protection.  Be not afraid.

And we need to be its messenger.

Might you be somebody’s angel? I bet you already are.  I know you can be. I believe we all can be.

Might we be a stranger’s necessary messenger?  Might our actions convey a message of safety to someone who needs to hear it, hear it now, needs to have it nestle and root within their heart where otherwise fear is making a home?

On Friday, the same day I was at the mall (it was a busy day here), once I was back in my office, I took a phone call.  A man called wanting to know about our sign on Tices Lane.  He wanted to know how to get one because, and here I use his words, “everything has gotten so divisive and it just seems like it’s the right message, so I want to put one up at my house.”

It’s not the first time I’ve heard from someone I’ve never met that they appreciate this sign.  Facebook connected me with someone in Milltown who expressed appreciation for our signs as she drove to and from work; she was thankful that we put out such a positive, affirming message. And she had even noticed when one of them went missing (I’m pretty sure it was stolen).

The one sign that we do have still – it’s actually too small for its purpose, would be so much more effective if it were larger, like the one I saw earlier in the month in Fairfax, Virginia – carries the message “We are stronger together; we are love’s hands in the world; we are all connected; we are called to create justice in the world.”

The one that was stolen said “We love our neighbors: immigrant, LGBTQ, of color, with disabilities, of all faiths.” 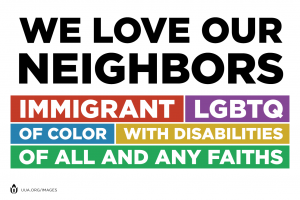 Literally hours after those signs were put along the road in early September, three young gay men showed up at our doorstep.  They saw them, stopped, came to thank us, and went on their way.  They knew here not to be afraid – precious currency in these times.

Sometimes we need the message.

Sometimes we need to be the messenger. 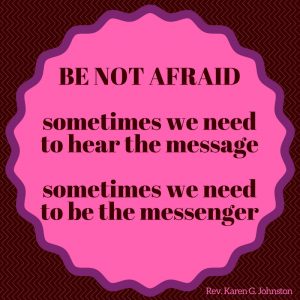