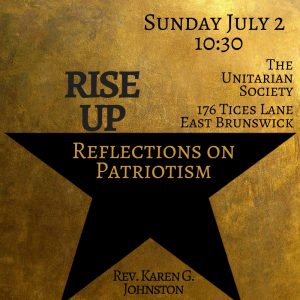 A colony that runs independently
Meanwhile, Britain keeps shittin’ on us endlessly
Essentially, they tax us relentlessly
Then King George turns around, runs a spending spree
He ain’t ever gonna set his descendants free
So there will be a revolution in this century

Fair warning: interspersed throughout this sermon are lyrics from the musical Hamilton.

Just so I know who is in the room: how many of you are familiar with the Hamilton soundtrack? Familiar at the intimate level? Like blast it daily at home or in your car?

In late February, I was at the annual First Year Ministers’ Seminar (FYMS). This meant that for three days, at least twice each day, on my walk from the hotel to the headquarters of the Unitarian Universalist Association’s in Boston, I walked past the Boston Tea Party Ships and Museum.

You know you are approaching the Tea Party ship because you hear strains of tin pipe. It sounds like music from the Revolutionary War era. That, what I just sang, is not it. That is the beginning of the song that King George sings as he becomes aware of the revolutionary furor growing in the colonies. 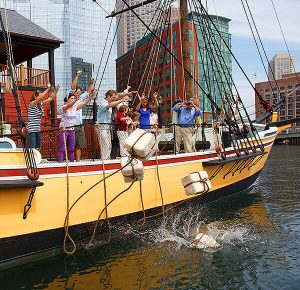 At that floating ship of a museum, there are period re-enactors who hurl crates of “tea” into the harbor. I did not actually go, but as I passed by, I saw rope attached to the crates so that they can retrieve the “tea” and do it all again the following hour for the next set of tourists, rising up against the royal ruler.

The Hamilton soundtrack plays relentlessly in my household. We have not seen the actual show nor are we likely anytime soon. This musical has sparked my curiosity in an historical era that has never much interested me. It is brilliant in its depiction of :

All this has captured my imagination.

Fact is, I’ve never been a particularly patriotic person. Ideologically and theoretically, I don’t believe in national borders. Practically I acknowledge them. I have a passport. Generally, I abide by the laws that define them (except when we took our honeymoon in Cuba six years ago).

Culturally, too. Having lived outside of this nation where I was born and raised, having traveled to several continents – three months in East Africa, Asia, a year and then again a summer Europe – I recognize that this place, this land, and yes, even this country, feels like home to me in a way that no other place does.

Still, despite this belonging, I do not participate in the pledge of allegiance. I think that started in middle or high school; I’m not sure. I raised my kids to choose for themselves. My older one got in trouble in first grade for not pledging, but even at that tender age, she knew her rights and stood up for them.

Typically, when I am someplace where the pledge – or the national anthem – is being done, I stand, facing the same direction as those who are participating, showing respect. Yet, I do not place my hand on my heart. I do not say the words.

Since becoming your minister, I have had more practice at this. At the East Brunswick commemoration of the 15th anniversary of 9/11, they pledged allegiance. At the South Asian Community Outreach Interfaith Holiday celebration they had Muslim boy scout troops bring forward the flag and lead us in the pledge. Same thing when I was one of the speakers at a Town Hall meeting at the Islamic Society of Central Jersey – boy scouts, flag, pledge.

I am no Colin Kaepernick, the NFL player who this past year rose up by taking a knee during the national anthem in protest of unequal treatment Black and Brown people in this nation by our legal and law enforcement systems. He has inspired many young people to connect with our deep democratic and patriotic right to protest and speak truth to power and has opened what is becoming a floodgate of other professional sports players using their status in our celebrity-hungry society to also rise up.

In no way are my small gestures in that same league (literally or metaphorically). Yet this past year since I have been your minister, I have had more opportunities to not pledge allegiance than I experienced in the past five or ten years of my non-minister life. And it has given me cause to reflect on my own choices, particularly given the immigrant-rich nature of this region.

For most of my life, I have experienced American flags as indicative of a kind of aggressive patriotism. Remember, I grew up in rural Oregon. I know that one’s relationship with the American flag can be a nuanced one – for some veterans and their families the flag is a source of honor and a symbol of what they were willing to sacrifice, or did sacrifice. That said, I was raised in a household where my father – who served in WW II – did not hang the flag in our home or express any particular affection for it. Like so many marginalized communities in this country, I do not feel like the flying of the American flag is a particularly friendly act.

But this may be changing for me. Perhaps as they sing in Hamilton

While attending these community events as a minister, as your minister – in particular, the ones taking place in immigrant contexts, or in Muslim contexts – I am noticing my relationship to the flag shifting. I have been deeply moved by these immigrants, by these Muslim born here as well as moved here, claiming the flag, claiming this country as theirs. I sense how exquisitely subversive and true these claims are: acts of resistance to hate, to xenophobia, to Islamophobia that is being peddled in this land and unfortunately, is being peddled by the current administration.

Hey yo, I’m just like my country
I’m young, scrappy and hungry
And I’m not throwing away my shot!

I am coming to realize that my refusal to pledge allegiance to the flag just might come from the same source as an immigrant community’s publicly claiming that very ritual that I decline. Depending on who one is — if one is an immigrant in these times of anti-immigrant sentiment; if one is Muslim in these times of mosques being burnt and travel bans being sought and affirmed by the highest court in the land – claiming the flag, making that pledge one’s own, this, too, undermines dangerous patriotism by refusing to cede that oath, or the flag, or this country, to the haters.

As I consider this more, I’m not sure if it is purely patriotism or if it is connected to more deeply held values. Likely it is both. But sometimes, it manifests in me as an impulse to defend this nation – to show up for democratic ideals — and I am surprised more than I could ever fully describe.

Have you heard of the moves in an increasing number of states to not exactly ban protest, but to relegate it outside of bounds of what it means to be a citizen in good standing? Over 20[i] states have introduced legislation to criminally penalize protestors, or to have them pay for the cost of police presence, as if the right to peacefully and safely assemble and exercise one’s right to dissent is a financial transaction?

It strikes me as patriotic to defend the right to protest, to publicly dissent; it strikes me as patriotic to defend that particular institution of our democracy. In Hamilton, they speak about the American experiment. Everything they do sets a new precedent.   One of my absolutely favorite lines is when King George hears the news that Washington is stepping down and not running for president:

They say
George Washington’s yielding his power and stepping away
‘Zat true?
I wasn’t aware that was something a person could do

We are living in times when we are called to lend our voices to the success of this experiment in a way we have not been asked since at least the McCarthy Era, and possibly, since the Civil War.

I want to honor those who would reclaim symbols of this nation – like the pledge – as an act of exquisite resistance. And I know that my true allegiance is less with the nation, and more with the values that undergird a deep democracy. I am far too aware that if I were to wear the American flag on a t-shirt or have it hang from my home, it might well send an unintended message to my neighbors, especially since we are white, and many, if not the majority of my neighbors are people of color. 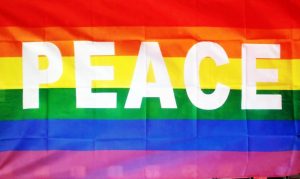 In fact, we do hang a flag from the parsonage, but it is not the American flag. It is a rainbow flag with the word, “PEACE” written large.

That is the message I want to send. PEACE. Or the implicit message, particularly to LGBTQ folks given the rainbow: SAFETY. I’d be okay with some other messages, like COMPASSION or SOLIDARITY or, particularly right now, RISE UP. Or GRATITUDE. I think all those would work for me, too.

Robin Wall Kimmerer, the author of this morning’s reading about her daughter’s refusal to say the pledge of allegiance, wrote a whole chapter reflecting on the pledge of allegiance – the one the United States of America asks its citizens to recite – and the Haudenosaunee Thanksgiving Address of the Onondaga people. That address is often described as a pledge, but is, according to Kimmerer, “known more accurately in the Onondaga language as the Words That Come Before All Else, [that] sets gratitude as the highest priority.”

Gratitude as the highest priority.

She describes what happens in schools in the Onondaga territory, where all the classes gather together and each week a different grade is responsible for the Thanksgiving Address, reciting it in a language older than English, sending “greetings and thanks to all members of the natural world.” This is one of the reasons that I decline to recite the pledge, though I continue to show outward respect for the collective ritual. This is one of the reasons I supported my own child when they decided not to take part in this communal ritual: I want to pledge myself – I do pledge myself – to something much larger, much older, than this nation. Kimmerer asks,

“What would it be like to be raised on gratitude, to speak to the natural world as a member of the democracy of species, to raise a pledge of interdependence? No declarations of political loyalty… required…”

A pledge, like a world, turned upside down so that it is not about independence, but is about interdependence. A pledge turned upside down so that in order to defend basic democratic institutions, one must rise up. A pledge that allows us to claim and love this country, while at the same time speaking truth to those in power and governance of it. A pledge that acknowledges the existence of the republic, while recognizing that what we honor goes far beyond the boundaries of that, or any, republic. A pledge uttered and offered for that “elusive justice [that just] might be within our reach.”

May we rise up. Amen. And blessed be.

[i] https://www.theguardian.com/world/2017/may/08/donald-trump-anti-protest-bills. May 3 2017: More than 20 states have proposed bills that would crack down on protests and demonstrations since Donald Trump was elected, in a moved that UN experts have branded “incompatible with US obligations under international human rights law”.