Our reading can be found here.

Dylan Thomas’ most famous lines are these:

Do not go gentle into that good night,

Old age should burn and rave at close of day;

Rage, rage against the dying of the light.

I come today to vanquish Dylan Thomas. At least those lines of his. I come today to ask you, encourage you, plead with you, do go gentle into that good night.

Not the old age part: that part I hope that you all, that I, that we all, burn and rave and be alive while we are alive.

Instead, turn to it, bring with you curiosity, see it, rather than your preconceptions.

Do the work now, in light, that allows you, in the dying of the light, a final, magnificent opportunity to be awake. 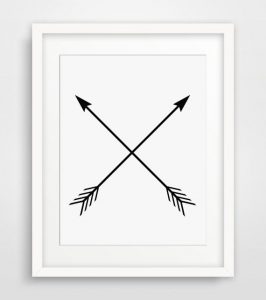 There is a famous lesson from the Buddha called The Two Arrows. This can be found in the original teachings of The Buddha once they were written down, in this case, the Sallatha Sutta. In it, the Buddha noted that an untrained person feels pain and that this is like being shot by one arrow. It hurts. It may cause injury. All this is true and real. However, the untrained person – that’s you, that’s me, that’s most of us – we do not respond to the pain of one arrow, but react as if we have been hit by a second arrow: bringing fear, bringing anger, bringing all sorts of secondary emotional responses that amplify the pain, turning it into suffering. The Buddha said – and in this lesson, he was teaching monks wishing to gain enlightenment – with training, one can learn to feel just the one arrow, not invite the second. Our modern interpretation has boiled this lesson – and perhaps all the lessons of Buddhism – into this: pain is inevitable; suffering is optional.

We turn away from the fact of death and its inevitability. We build vast and robust economies on its denial. We flood our senses with all sorts of speculation, all sorts of preconceived notions and longings and in so doing, we invite second arrows rather than preparing ourselves for the one.

It’s worth our while to reflect on what we actually mean when we use the word death. Yes, there is the literal level whereby we recognize physical indications of death: heart no longer beating, cessation of breath. But you might be surprised how what seems obvious and empirical is culturally bound and open to argument. For instance, while the medical establishment says that brain dead is dead dead, that state does not involve the stopping of systole and diastole or the termination of the inhale and exhale. Among indigenous Tibetans, as well as modern Westerners who follow Tibetan Buddhism, there is an understanding that the death of the body happens as a process, taking more or less three days.

Beyond the literal understanding of death, there are a host of murky thoughts and disturbing emotions, not to mention a crowd of theories and preconceived notions, some available to our consciousness, others not readily. They all tend to be mixed up with hopes and fears. Wise people – in particular, one of the wise people I go to for my own befriending death practice, Judith Lief – tell us that if we do not surface these attitudes and bring our awareness to them, it is to our own detriment. Not because we miss out on a so-called “correct” view of death. But because these preconceptions have real effects on our lives.

According to Lief, and I agree with her,

They determine how we relate to death ourselves and how we relate to other people who are dying. When our experience is distorted by speculation, it is difficult to see clearly. We lose the ability to distinguish what we know directly from what we have heard secondhand, what we believe on faith, what we cook up out of fear, and what is wishful thinking. So it is important to bring our own personal assumptions to light and find out what they are.

They impact not just our attitude towards dying, our experience of death, but they impact our appreciation for what it means to be alive in this very moment.

A poem from Mary Oliver, When Death Comes:

to buy me, and snaps the purse shut;
when death comes
like the measle-pox

when death comes
like an iceberg between the shoulder blades,

And therefore I look upon everything
as a brotherhood and a sisterhood,
and I look upon time as no more than an idea,
and I consider eternity as another possibility,

and I think of each life as a flower, as common
as a field daisy, and as singular,

and each name a comfortable music in the mouth,
tending, as all music does, toward silence,

and each body a lion of courage, and something
precious to the earth.

When it’s over, I want to say all my life
I was a bride married to amazement.
I was the bridegroom, taking the world into my arms.

When it’s over, I don’t want to wonder
if I have made of my life something particular, and real.

I don’t want to find myself sighing and frightened,
or full of argument.

I don’t want to end up simply having visited this world.

I think that line in the poem is one of my life goals:

I don’t seek to die earlier than I am supposed to. I do not court death.  I’m happy to be here now, be here alive. My curiosity does not draw me closer to that date in the future when I exist this life. But whenever death happens, it is my hope that rather than turn away, I turn toward, full of curiosity.

Candidly, I kinda expected that we would have an emptier house than usual, given that folks can know the content of the sermon ahead of time. This is not the easiest topic. In the past, my husband has sometimes called the degree of my interest in this topic “on the morbid side” with a wee Yorkshire accent.

Befriending death has been part of my meditation practice for many years. On and off. I like to think that besides making me a better person, it makes me a better minister. But to be clear, I am preaching this topic not because I already got this befriending death thing down. I don’t. By any stretch.

I am preaching this — and planning for great things in the fall — because I do not have this down. Because I’m not ready to die and yet I could any day. Because when I get a little bit sick, I’m amazed at the unbidden fear-based stories that occupy my mind and send my imagination to places I did not know were part of my psyche.

My hope is that you – all of you, some of you – will accept my invitation to we walk this walk together, learning and delighting and comforting and coping: together.

My mind is bright with ideas, not all of which will come to fruition. One of our decades-long Friend of this Society and retired geriatric social worker – she and I have been hatching plans and we are looking for a few more accomplices.

Again, we need a few more accomplices to make this happen, so if you are interested, please let me know. 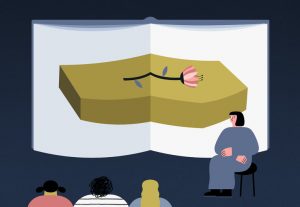 Last month there was a piece in the New York Times called, “First Sex Ed, Then Death Ed.” It was written by a medical doctor, Jessica Zitter, in the Bay Area who had taught sex ed to her middle school daughter’s class and years later taught a death ed class to a different daughter, this time in high school.

What a concept! I had never thought about riding the coattails of our amazing Our Whole Lives – OWL – sexuality curriculum with a curriculum on death. What a great idea! Here’s some of what Zitter wrote in that article:

Many of the patients I have cared for at the end of their lives had no idea they were dying, despite raging illness and repeated hospital admissions. The reasons for this are complex and varied — among them poor physician training in breaking bad news and a collective hope that our technologies will somehow ultimately triumph against death. By the time patients are approaching the end, they are often too weak or disabled to express their preferences, if those preferences were ever considered at all. Patients aren’t getting what they say they want. For example, 80 percent of Americans would prefer to die at home, but only 20 percent achieve that wish.

Many of us would choose to die in a planned, comfortable way, surrounded by those we love. But you can’t plan for a good death if you don’t know you’re dying. We need to learn how to make a place for death in our lives and we also need to learn how to plan for it. In most cases, the suffering could have been avoided, or at least mitigated, by some education on death and our medical system. The fact is that when patients are prepared, they die better. When they have done the work of considering their own goals and values, and have documented those preferences, they make different choices. What people want when it comes to end-of-life care is almost never as much as what we give them.

The moment of death, the moments of dying and the physical and emotional discomfort that come with it, these are much harder to not be overwhelmed by, unless we have spent time in the days and years and decades facing toward, rather than away. This is the thing that is one of human existence’s deep paradoxical truths: for most people – I will not say for all – for most people, facing and engaging with death now brings an unparalleled sweetness and awareness of life as you are living it – an awareness of life and its precious qualities unavailable any other way.

So this practice is not morbid, as Tony once thought but has come around to think otherwise, but a gift. A gift to yourself, a gift to those whom you love when they are close to death, a gift to this death-denying culture, and in my opinion, a necessary act of political and spiritual resistance.

May we all find the ability to cultivate what the poet Mary Oliver so beautifully described as wanting to step through the door full of curiosity, wondering: what is it going to be like, that cottage of darkness. And let us end with those beautiful words from Mark Morrison Reed:

So let me die laughing, savoring one of life’s crazy moments. Let me die holding the hand of one I love, and recalling that I tried to love and was loved in return. Let me die remembering that life has been good, and that I did what I could.

But today, just remind me that I am dying so that I can live, savor, and love with all my heart. 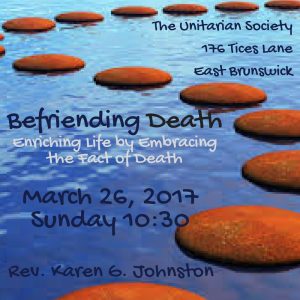 One thought on “Befriending Death: An Excursion (sermon)”