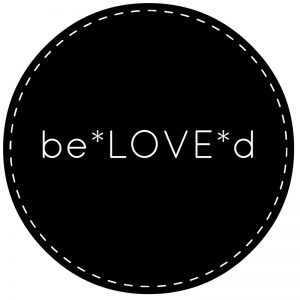 We all want to be loved.

We — likely all people of conscience and faith — wish to be Love. Capital “L” Love.

It’s not easy. The way is not always clear.

Be Love. Be loved. Beloved. Just what does it mean – Be Love — in the midst of feeling so relentlessly be-leaguered by the onslaught of the latest news.

What does it mean in the midst of witnessing so many being be-littled? Like that five year old boy, handcuffed at the airport, separated from his mother, a security risk – a security risk?!?

Or the executive order titled ‘Establishing a Government-Wide Initiative to Respect Religious Freedom,’ …with sweeping plans to legalize discrimination.

Does Love look like the message from the principle at Roosevelt High in Des Moines last Monday? Heck yea.

I have been wondering what that principal felt like while writing that speech? What he felt like, in the moments before he turned on the sound system, asked for their attention? I think there must have been adrenaline coursing through his body, at that threshold where fear and courage meet, and courage decides to let fear be its companion, not its captor.

I wonder what it felt like to be an immigrant student at that high school, head on desk, not listening to the PA system, because – dude, it’s always boring when they tell us what’s for lunch or what the stupid new rule is – but then, the ears prick up, the heart is alerted. He’s talking about me, and a lot of people have been talking about me, about my family, my people, my nation, and it hasn’t been good, but here – what’s this? — a message of love.

Does it look like Victoria, Texas, where a mosque was burned to the ground last weekend?

Robert Loeb, the president of Temple Bnai Israel in the small town, [was reported to have said]: “Everyone knows everybody, I know several members of the mosque, and we felt for them. When a calamity like this happens, we have to stand together.

“We have probably 25 to 30 Jewish people in Victoria, and they probably have 100 Muslims. We got a lot of building for a small amount of Jews.”

One of the mosque’s founders, Shahid Hashmi, said: “Jewish community members walked into my home and gave me a key to the synagogue.”

To whom do we hand our keys? Our TUS’ keys? Metaphorical or real – or in our case, secret combination — access to this space we steward not just for ourselves, but in service of the vision we have for this world?

There is a call for houses of worship to become sanctuary for those who might need it – for those (my apologies for this coarse term) “low hanging fruit” easily identified by the current administration for quick deportation: the DREAMERS, initially protected by DACA but now made more vulnerable by it; those Muslim men, then aged 16-65 who were required to register with the NSEER program after 9/11 – supposedly that registry, which had not been in use for years, was dismantled before the last president left, but there is now talk that it might be used to identify people; how about those folks whose deportations were stayed before, they are now at high risk, including those individuals who the Reformed Church of Highland Park gave sanctuary to over the past decade and who have become interwoven into our shared communities – they, our friends and neighbors, are at higher risk now. 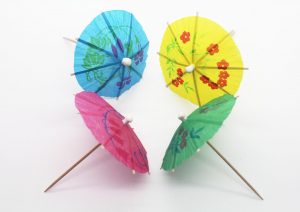 Does Love look like the thousands – thousands upon thousands – who showed up at our international airports, across the country, on such short notice, to witness, to decry the chaotic immigration executive order and travel ban, explicitly targeting people from some – not all, not the ones with whom our government has business ties – from Muslim-majority countries?

Now, I didn’t go to Newark airport. I don’t know if any of you did. Blessings upon you if you did. I’d like to hear about it.

I live –what? – only a half hour away. I could have, though it would have been a significant inconvenience given what was going on in my family, but I could have, and I didn’t.   I’m still sorting out how I feel about that choice.   I do know that I am so thankful for those who did. Newark. JFK. Philly. SFO. Dallas. Los Angeles. The list goes on…

I guess you can’t be everywhere all the time, but I think I do have to figure out when I am going to show up in that particular way. Not just for planned and scheduled marches, like happened several weeks ago, but these drop-everything-right-now calls to gather, to be a part of social witness, to resist the encroachment of authoritarianism.   More and more of them are happening because more and more of them are tragically necessary.

But here’s the thing: there is evidence that showing up turns the tide.

Researchers Erica Chenoweth and Maria Stephan have studied major nonviolent and violent campaigns for the removal of a government or for territorial liberation since 1900. Their conclusion? Twice as likely are nonviolent campaigns to be successful than violent ones.   Chenoweth wrote this week in The Guardian, that if 3.5% of a population engages in sustained non-violent resistance – for the long haul presence, a movement not a moment — to an authoritarian leader or government, it will topple.

Some of you showed up last Sunday evening – attending the vigil for immigrants at the Reformed Church of Highland Park. Perhaps that is one way we could choose to become a sanctuary congregation: supporting them if – but more likely when — they choose to once again take in those being targeted for unjust deportation.

Vigils. Protests. Acts of social witness like the Burma Shave Love Your Neighbor signs along our frontage. Crossing the Awkward and the uncomfortable to build relationships with those whom we do not know well, or at all, but are caught in the crosshairs of national tragedy. This. More and more, this is what these times call for.

How do we be Love? A week ago Friday, I was on a conference call with 999 other faith leaders across the land, taking part in a conversation about moral resistance. We spoke of a week of concerted actions of solidarity with our Muslim brothers and sisters.

You were this Love. Jillian, our Director of Religious Education, made beautiful big cards for the two mosques with whom TUS is in renewed relationship – children signed them, youth signed them, adults signed them.

One of our newer congregants – Laura – she happened to have blank cards with her. Who has blanks cards with them? Well, she did, and they were cards that had followed her, over many, many years.   She told me that she carried the cards from Kansas to California, Virginia, Japan, Italy, and then here, to New Jersey, never knowing why she kept them since it seemed clear she would never use them.

Then she saw a message from me on Saturday night, hoping folks would use coffee hour to write messages. She realized their purpose.

Out of those beautiful messages of love, of friendship, of solidarity, of comfort, we delivered them to two Muslim communities — on Friday with other faith leaders from East Brunswick and Saturday with Linda, Kathy (representatives from your board) and Troy.

So this is indeed Love, gestures meaningful and significant to our interfaith neighbors. In return for our meeting with our Muslim neighbors over on New Brunswick Ave yesterday, they gave us those flowers in the lobby. It was a delightful conversation we had, including talking about the vagaries of unpaved parking lots!

I want to say, as wonderful gestures of love as they were, they were also gestures that remain within our comfort zones. It feels good. It is easy. It does not ask much of us.

These times are calling for us to an ever fiercer love, one that will rarely be comfortable, that will mean adrenaline coursing through OUR bodies, not just the bodies of people whose stories we read about. Perhaps you have already found yourself in such a situation – the fierce love of interrupting someone harassing one of our beloved gay, or lesbian, or bi, or trans, or genderqueer friends or neighbors or strangers. The fierce awkward love of calling a friend or co-worker or family member in on something said that is racist or sexist or plain ignorant.

These times are asking of us, are requiring of us, that we not only write such cards and messages, but that we move out of the house of our own comfort (these walls) and be the deliverer of such messages – that we meet our neighbors not on our turf, but theirs. Or that we do actions not of our own making, but of their request – like perhaps showing support for the East Brunswick mosque’s expansion at the township’s planning board meeting on February 15.

We need not risk our lives (not yet, and pray not ever, though some have already made this choice), or our humanity (pray not ever).  At the very least, perhaps as a starting place, we must risk the current contours of our comfort zones.

This too – living outside our comfort zones – this is part and particle of Beloved Community, of being Love. Being Love is built on a sense of deep connection. And with deep connection – just like with authentic covenantal relationship – it’s complex. It’s not easy because there is discomfort, there is anxiety, there is a certain amount of unknown.

In building Beloved Community we may – we will – find ourselves in community with folks who do not share our politics or theologies, may not even honor our sense of who god is or is not, and yet we are called to Beloved Community, called to Be Love, nevertheless, finding intersections of our common humanity as our starting place. It’s not only possible. Our very survival is predicated upon it.

Be Love even with, or especially when, adrenaline is coursing through my veins, as it is likely a sign that I am on a path that requires courage.

We be Love in order to offer “portable sanctuary” with our presence in the world.

We choose Love, not because we are guaranteed it will win if we do, but because it is guaranteed to lose if we don’t. 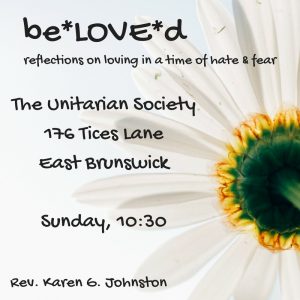