Last May, when I sat with many of you at the Women’s luncheon to interrogate – I mean interview – the ministerial candidate to decide whether to call her – call me — I had the joy to listen to and then answer your questions and to ask you some. It was a sweet, if mildly nerve-wracking, time.

One of the more tricky questions came from Mary Dalton. She asked how I felt about hope. I still remember the sigh in my body before I attempted to answer that simple, not-simple question. 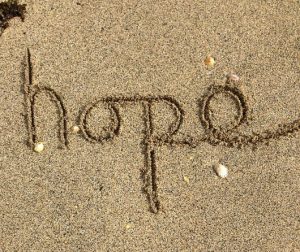 Hope. Optimism. As you heard in the Time For All Ages story, this is one of the five smooth stones of liberal religion, offered here as one-line summaries by Rev. Galen Guengerich, minister at All Souls in New York:

In order to make JLA’s writings more relevant to more Unitarian Universalists, some ministers have distilled each of these five smooth stones into shorter – sometimes even one-word – signifiers. There is no one universally agreed-upon list; in fact, the multitude of lists shows some consensus and a lot of creativity, as well as how a single concept can be interpreted many different ways.

In the Time For All Ages story, I offered up action words, adapted from a religious educator, Karen Fisk, in Amherst, Massachusetts (with her permission). They were:

Here I offer up not action words, but my own pithy statements of their essential nature:

In that last one, you hear JLA’s use of the phrase, “ultimate optimism.” My pithy statement for the fifth smooth stone is Trust, though most choose the single word, “Hope.”

How do you feel about hope? Is it available to you? Does it come easy, a part of your easy-going temperament? Do you have to nudge yourself to feel it? Does it elude you, not just on a day here or a day there, but far more often than makes living easy?

It is a thought? An emotion? A corporeal feeling? An aspiration?

Is it possible? Is it more or less possible today than yesterday? Than last year? Than you imagine in the years to come?

After yesterday’s marches – across the nation and across the world – as I was marching with apparently 1.2 million of my closest friends in Washington, DC – hope seems a bit more within my grasp.

I have heard said over and over, by mentors and colleagues, that ministers – even over the span of decades – preach only one sermon in their lifetime. They preach it a multitude of ways, a variety of iterations, devising an assortment of ways to enter into the heart of what they are preaching.

(Or at least one hopes that there is a multiplicity, else it gets pretty boring pretty quickly.) 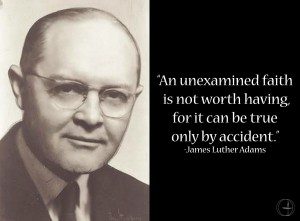 The five smooth stones is not the only thing that James Luther Adams – JLA – contributed to our modern engagement with Unitarian Universalism. He spent two decades teaching at Meadville Lombard, one of our two remaining UU seminaries – and then went on to teach ethics at Harvard Divinity School, also for a long time. From all that I read and hear, truly he was beloved by his students and colleagues.

He spent time studying with German theologians, who were the height of progressive theology, during the first third of the twentieth century. In so doing, he spent time in Germany as the Nazis were coming to power, first in 1927, and again in the 1930s, including before and after Hitler came to power. He studied with those who created the Confessing Church, in opposition to the Nazis and in opposition to the Christian Church which had fallen in lock step with national socialist movement.

His notions of optimism, as well as his insistence on voluntary associations, as well as the power of each of our, and our collective, agency in the world, come out of the fires of his first-hand experience with fascism. Before heading to yesterday’s march on our National Mall, a place I hold quite dear from my four years of residing there, I read JLA’s essay, “The Evolution of My Social Concern.” In it, he describes attending in 1927 – six years after Hitler became the head of his movement and six years before he became head of state – a Nazi parade of thousands in Nuremburg.

I knew I was going to a different kind of large gathering of people than the one he described here. But I also knew that I –that we – are living in a time that holds too many echoes to that era, too many similarities in the rise of a national leader using ethnic and racial scapegoats to further his, and his cronies’, hold on power – all through legitimate means.

While in conversation with one of those theologians who were opposing Hitler, Adams found himself asking the following question, ‘If Fascism should arise in the States, what in your past performance would constitute a pattern or framework of resistance?’ “ His response to his own question:

I could give only a feeble answer […]. My principal political activities had been the reading of the newspaper and voting. I had preached sermons on the depression or in defense of strikers. Occasionally, I uttered protest against censorship in Boston, but I had no adequate conception of citizenship participation.

Pretty devastating assessment of his own life. I have been wondering about how my own life would fare.

In his further reflections upon his time in Germany, Adams reports

Repeatedly I heard anti-Nazis say, If only 1,000 of us in the late twenties had combined in heroic resistance, we could have stopped Hitler. I noticed the stubborn resistance of the Jehovah’s Witness. I observed also the lack of religious pluralism in a country that had no significant Nonconformist movement in the churches. Gradually I came to the conviction that a decisive institution of the viable democratic society is the voluntary association as a medium for the assumption of civic responsibility.

Here we see where the second smooth stone emerges – how precious and costly his experience that brought to him the commitment to voluntary association not for its own sake, not as entertainment or good company, but a necessity in the face of authoritarian tendencies and realities. Perhaps here we also see the forth stone: we are not to wait for god, or other people, to do good, but to do it with our own hands, made stronger with the second stone at our side: in community.

And here I want to offer you a little story that speaks to some of our smooth stones, not from last century, but from this past Thursday. It comes to us from the Rev. Dawn Cooley, who took part in an organized visit of constituents going to Senator Mitch McConnell’s in Louisville to share their experience of what losing the Affordable Care Act meant to them.

It was quite an experience. One woman told me how she had been feeling depressed and how this action helped her regain a sense of her power. Everyone had stories about how important the ACA is in their lives.

I’ve never done anything quite like this before – I’m more used to confronting power in a crowd, not in power’s office. But it was a whole lot easier than I thought and I know we made a difference today – maybe not in McConnell’s opinion, but in the lives of those of us participating, and the security guards we talked to, and the poor guy who listened to all our stories and diligently wrote them down.   Totally worth it.                  (Facebook, 1/18/17, used with permission)

And here I want to share my own experience from yesterday’s march in Washington, DC, where my daughter and I ended up spending the day with a ragtag group of UU young adults from NYC, Baltimore, and Cleveland who had not known each other before. In the throng and crush of the friendly, cooperative crowd that involved more “waddling” than marching, we became a temporary congregation, an impermanent sangha, complete with dancing to Madonna’s Express Yourself and singing from the teal hymnal, by heart, “Woyaya,” when we were trying to get through the press of the crowd

We held hands not to get lost from each other as we squeezed our way through the tightly-knit crowd; we held each others’ load when it got too heavy, we offered toilet paper when we had extra. These young people gave away buttons of peace when strangers – who looked very different from them, across differences of race and religion — expressed appreciation and passed on coveted posters when another stranger seemed to long for it more than the current possessor. These young people made me proud to be a Unitarian Universalist today. It made me realize that we do these actions not only to achieve some goal, but to embody the world we dream about now.

It seems that these five smooth stones – the ones that helped little David slay the giant Goliath and allow the scrappy Israelite army to win against the Philistines; the ones that we have come to understand as a major theological underpinning of Unitarian Universalism, in particular, and liberal religion, in general – are good company in our spiritual pockets, alongside our seven principles, about which I preached last week. Our responsive reading today weave these together – the five smooth stones, the seven principles, worthy company for us on this intentional journey as Unitarian Universalists.

That sixth stone is you.

That sixth stone is me.

That sixth stone is we.

Maybe today’s chalice lighting — the declaration of conscience drafted jointly by the Unitarian Universalist Association and the Unitarian Universalist Service Committee just a few days ago — has something to do with that sixth stone: affirming our unyielding commitment to protect the interdependent web of all existence, to resist the turning back of advances in access to health care and reproductive rights, a pledge to embody compassion and justice in human relations.

I’m not sure what the sixth stone is — but I believe with my whole heart, it is ours to name and to become and to embody together.

May it be so. Blessed be. 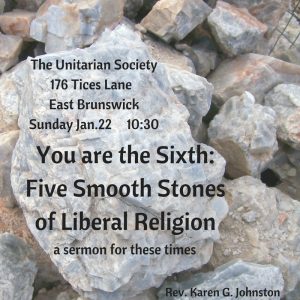 Adams, James Luther. “The Evolution of My Social Concern.”