In my church we sing a hymn, All Creatures of the Earth and Sky, calling them “kindred.”  Family.  All part of the interdependent web of existence of which we are a part.

This fall we have shared our new home with a variety of creatures.  A veritable living example of the interdependent web of all existence.

We have not been kind to them.

There was the wasp nest near the front door. We exercised our power over them and poisoned them.

There was the hint that rodents lived here – rat traps from a previous occupant. Then a real rat showed up, and sounds of scurrying in the crawl space under the eaves. Once again, we exercised our powers and chose their destruction.

It is not in line with my spiritual values, but it is the choice I made. The pest control guy, when he laid traps for the scurrying creatures above our heads, offered to lay out poison for insects on the floor. I declined, so I guess I am not completely corrupted by human arrogance.

There are other creatures with whom we share our home. We have brought a kitten into the house. Originally planning on having her be an indoor/outdoor cat, we have settled at this point on her being an indoor cat, wanting to welcome the beautiful birds that inhabit our backyard.

Along with those birds there are at least two woodchucks (they are called groundhogs here, but I’m not making that adaptation in regional lingo) who live under our backyard shed. I’m pretty sure they are responsible for the hole being dug under our compost bin. I think the fall bulbs I planted this summer will likely become high-calorie winter food for them. We’ll have to see.

There are the ubiquitous deer that roam the yard and wider neighborhood and apparently the whole state. I see them mostly at early evening, just after dark. I have learned to drive slowly because they are numerous and everywhere and in their fear, are likely to head not away from you, but towards your metal death trap of a car.

This fall I have discovered that dead ones line the streets here like squirrels where I used to live. It’s quite distressing. My adult kids still talk about the time I had to pull the car over after having inadvertently killed a squirrel while driving, I was weeping so vehemently. So the huge carcass of deer just on the side of the road here is both incredibly upsetting and already has become so common that I have begun not seeing them.

There are lots of creatures. Even here in the suburbs. This should not be surprising since we humans are the interlopers here, not them.

Inside our home, we have encountered many spiders. They all tend to be the same kind – grass spider, we have learned. In general, I’m not afraid of spiders, but I am not the only one in the house and we don’t all share the same opinion.

We do try very hard not to kill the spiders, even those of us who experience fear in their presence. (Well, I should say that the kitten does not share the non-kill philosophy.) So often I will come home to find glasses turned upside on the floor with a spider inside, still very much alive, waiting for me to release it outside. We figure that even if they like the inside of our house, they are called “grass” spiders for a reason and we hope they will thrive out there.

As I’ve said, I am not afraid of spiders, but when they move in that spider-way, I do get a little jittery. The other day, the grass spider that lives in the mailbox decided to take a ride on one of the letters as I brought it. Once inside, it walked onto my arm. I definitely got jittery then and there, shook my arm before I could think a thought. The spider landed at the feet of the kitten and, well: rest in peace or in pieces, little grass spider. 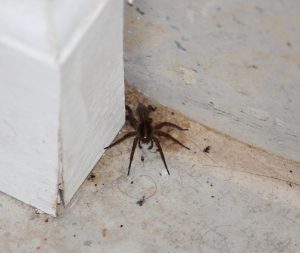 Just recently, this guy (or gal) has revealed itself in a crack in the tile work in one of our bathrooms. Not small and quite dark in color, it makes quite an impression. I have changed where I place my feet, just to keep an appropriate distance between me and it. I think we’re both on the same page because if I do get too close, it retreats back into its cracky lair.

If I read the internet correctly, my best guess is that it is a Hacklemesh Weaver (Amaurobius ferox).  Turns out that of the 39 species of spiders in New Jersey, there is the Eastern Parson Spider, which I was kinda hoping this would be since I do live in a parsonage. Oh well, the universe does not always offer congruence.

The spider who is my new roommate, at least according to the internet, is described as “robust,” “common in and around homes,” and likes “dark, humid places.” I think a crack in the tile work in my bathroom counts as both dark and frequently humid. So this spider must have thought (or felt) that it hit hog heaven when it made its way to this place.

That is not exactly my take on it (there will be no more going into that room without the light being turned on), but neither am I interested in relocating this fellow creature. If it is willing to respect our mutual need for distance, I think this will be an excellent chance to practice co-existence.

And that is in line with my spiritual values.