When A Tree Lands On Your House

So, after consulting wise people whose profession requires them to know this stuff, we decided to follow the guidance of deception as kindness. Whatever we did, we were not going to tell her the truth.

(You’re thinking about a pink elephant, am I right?)

DON’T TELL HER SHE’S NEVER RETURNING TO HER HOME. Yeah, sure.

Somehow she voluntarily got into the car under the guise of driving to see her old work place (which we actually did do). I cannot explain why this was of interest to her, but I am damnsure thankful for it. Pretty soon she began to ask – with the frequency of someone with dementia, which is to say, super-duper often, “Where are we going? Why are we going this way?” I had to bite my tongue and breathe into my best intentions and not reply, “WE ARE GOING THIS WAY BECAUSE YOU ARE NEVER RETURNING TO YOUR HOME.”

My brother was driving and I was in the backseat with my mother. He and I had decided that we would create a plausible (if you have dementia) story. I don’t remember how we came up with this idea; it was probably my idea, not because I am so much more clever than my brother (which I am) but because I have a devious streak (much more so than he does).

The plan: while touring her old work place, I would get a pre-arranged/fake phone call from her caregiver, telling me that one of the pipes in her house had busted, the house was flooding, and we couldn’t return right away. The caregiver was in on this plan, tasked with the job that once we left the house, she would gather the most important of our mother’s possessions together to bring to the memory care facility to provide some modicum of familiarity.

The day’s weather offered a more visceral opportunity and we went with it. There were huge rainstorms that were swelling the local creeks, flooding some of the roadways and causing minor havoc. When we told our mother about her house being flooded, we told her it was due to the rains, pointing to local creeks as evidence.

My mother kept asking “where are we going?” and “why are we driving this way?” and saying, “I want to go home.” The repetition was relentless. It came not from a place of disbelief, but from not being able to integrate and retain our explanation. With each time she asked, I found it was extremely difficult not to sense her doubt (she couldn’t; she didn’t have that capacity anymore) and to feel guilt at the deception.

Despite an impulse to confess my soul and tell her the truth (which deep in my heart I knew would cause great agitation for her), I spun the tale more widely and more deeply.

I let her know that her caregiver (about whom my mother cared very much) got out of the house safely.  As the caregiver got out and told us, so I reported to my mother, she shared that the police had blocked off the whole neighborhood because all the houses were impacted. I let my mother know that all the neighbors she remembered were also safe, being evacuated by the police.

I told my mom that they were texting me to let me know they were okay, as well as to send us updates. We used this ruse to explain that we would have to find a place for us all to stay that night, since the police were letting no one back that night. This explanation did not quell the onslaught of the same questions over and over, but for the most part, they seemed to satisfy her curiosity until she forgot (usually by seven minutes later), and asked again.

I don’t yet have an explanation, and I hope it does not mean that I am inherently evil (my faith tells me otherwise) or that I am a sinner (not exactly my theology), but… I enjoyed the storytelling.  It was a challenge.  I took delight in being able to craft a sophisticated, detail-laced story that built on itself and seemed plausible.  I felt like I had a very important, very real, very now purpose.

And strangely, I found myself being carried away by the flow of the narrative. In a corner of my mind, I think I began to believe the story myself.

Up until this point in the story, I had been making the whole thing up, inventing new details my brother and I had not discussed the night before (he was just going with whatever I came up with). I was talking into a cell phone with no one on the other line. I was reading texts to my mother that did not exist. My imagination was sparking.

Then I received an actual text. From the caregiver. It was a photo of my mother’s house.  With a huge pine tree on the roof. 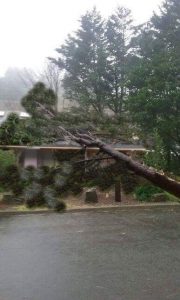 It was definitely not part of the plan.   It caught me off guard.  It was brilliant.  It was photoshopped.

“Mom? I’ve got worse news. Mom, you’re not going to like this.” [My brother’s curiosity at this point is quite piqued.]

“Mom, Val just sent a picture of your house. It seems that a tree has fallen on it. I think this is why the police evacuated the neighborhood. It’s very dangerous. We can’t go back now for sure. Do you want to see the picture?”

She did. She looked at it. She understood. She got it. She got it in a way that my words and explanations could not reach. The moment was palpable in the car.

The frequency of her questions slowed considerably. When she did ask, “Now what are we doing?” I would show her the photo of her house with the tree fallen on it; that was enough.  This deceptive photo was a beautiful act of compassion.

And that has been our refrain ever since. 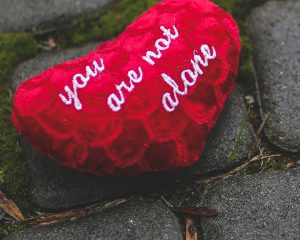