Deception as the Kindest Thing

As we move closer to The Time (when my mother can no longer live in her own home), it becomes clearer that honesty must cede its high throne as the measure of integrity and right relations. Instead, endorsing the truth of the Dalai Lama who says this is the basis of his religion, kindness takes its place.

Much of my life has been ongoing, clumsy, ineffective, hopeful, earnest attempts to be awake. To awaken myself, awaken others.

For it is important that awake people be awake,
or a breaking line may discourage them back to sleep;
the signals we give–yes or no, or maybe–
should be clear: the darkness around us is deep.

excerpt from A Ritual to Read to Each Other – William Stafford

Awake means: turn towards hard truths and practice rigorous honesty. This is true for my befriending death practice; true for my Work that Reconnects efforts around climate change; true for figuring out the privileges from which I benefit and how to keep going towards justice and equity anyway.

But it turns out that dementia changes the rules, drops them on their head, and goes all topsy-turvy. And not just in the brain of the identified patient, but in the rules of how we honor one another. It turns out that honesty is not the best policy. It turns out that being “transparent” will not engender trust. In fact, truth-telling will often lead to worry and agitation that cannot touched or calmed by rational thinking (remember, that part of the brain is disappearing).

Four or so months went by after the court hearing that granted legal permission for us to move our mother. That time is known in my mind as the next – and last — round of “heroically keeping her at home.” However, nothing lasts forever, and this round, and her staying at home, had to come to an end sometime, somehow.

A stumble, bumble of terrible things started happening and kept happening. More heroic responses, clever, creative, and sometimes more than I could personally endorse were suggested and implemented. More often than I would like to admit, my brother’s wild ideas worked…at least for a little while. I could not then, and still cannot, match his energy, his compulsion, his dedication.

The straw that broke the camel’s back involved a middle of the night arrival of the local fire fighters and my mother’s refusal to let them in. The super short version is that no one was hurt and that my mother was no longer trust-worthy to live at home alone. So we had to come up with a viable plan to move her out of the home she was refusing to leave. This was not going to be easy. And so we learned 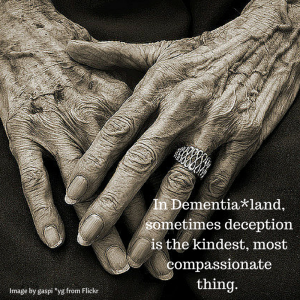 In Dementia*land, sometimes deception is the kindest, most compassionate thing.

If you doubt this assertion, I am with you. Or I used to be. Until my travels in this terrain left these few paths: lying by omission, lying by prevaricating, and flat out lying.

If you are not convinced, and not even open to this as a possibility, you might not appreciate the following story. You might want to move along and skip the next post. But if you are intrigued by the possibility of within the context of dementia that compassion and deception can be paired with integrity, then read on.  If you cultivate an appreciation for the absurd, then read on (next post).