When Loving a Dog is Not Enough

We thought that we were going to move her last summer. But then there was a court hearing.

This is no easy feat for a person with an eroded sense of cause and effect, but she did it.   This caused more than just inconvenience; it inflicted more pain on my mother that she does not now remember, but which she felt at the time.  But it was also one of these magical thinking moments come true: she had a depth of capacity she had not demonstrated (and could not sustain).  She showed up!  Hoorah!

So then, there was a painful, poignant hearing at the local courthouse. My brother attended in person. When it was my time to testify, I was called (given that I was three thousand miles away). I didn’t know when the call would come, if it would come at all. We were told that the hearing would last 45 minutes, tops. Two hours into the time scheduled for the hearing, while sitting at my local public library trying to get some reading done for some upcoming seminary class, the phone rang. It was the court. There was no time to even move from the little oak polished carol next to the window. So I testified, in a loud whisper, that the whole courtroom, including my mother, and the folks on the second floor of Forbes Library back near the recorded books on CD, could hear.

Not nearly as horrible as the fact and the aftermath of my mother’s beloved dog being nearly-poisoned by my mother’s neglect regarding her disposal habits of food and cigarette ash (when combined are quite toxic to a dog, who cannot stop herself from rooting through the garbage for tasty treats). Not nearly as horrible as my mother’s loud, audible gasp when the judge asked my brother what he planned to do with the dog, who was still alive, but also incapacitated from the nicotine-induced seizure, were he to move my mother out of the house.

My mother’s love of her dog was, we thought, the only thing keeping her alive. It turned out, that was not true. 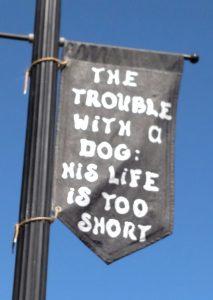 We found it out because the beloved dog, became too ill, suffering from the aftermath of the poisoning. We had her put down, heart-broken at her pain and at our decision. And my mother, who still misses that dog and looks longingly at the framed photo of the dog that we make sure is always near, did not seem to notice. A few questions for a few days, then, as with everything, having a dog receded into the inaccessible recesses of my mother’s mind, becoming a memory, and then, only when cued in.

This entry was posted in Dementia*land and tagged caring for mother, court hearing, dementia, love of dog. Bookmark the permalink.