To Clean or Not to Clean?

The woman offering my mother Meals on Wheels turns out to have learned trombone from my father, who gave her a scholarship to attend music camp. The administrative assistant at the law firm we are engaging to seek conservatorship over my mother lives at the top of her street, in a split-level house we looked at but didn’t end up buying when we first moved to the area. I am staying in the renovated attic rafters of an old high school friend whose partner owns a hip art gallery which sells photographs by my mother’s neighbor and helpful friend with whom I am having breakfast tomorrow.

It is not the number of residents of this town, the largest in the whole county, which reveals the truth of its smallness. Ten thousand is big for these parts.

It may be “big,” but it’s not much, or not quite enough, when the local hospital can perform physical evaluations in the ER, but… if you want someone to conduct a psych eval, they will have to transport her in an ambulance a minimum of one hour three-quarters, but possibly a full two hours twenty minutes, depending on a host of factors for which I have little patience. 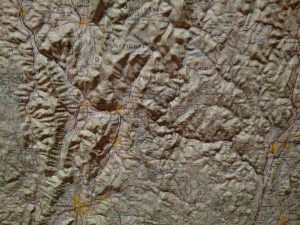 This has been a hard, hard day. I am trying to do my best here, but I am at a loss. I feel alternately convinced that I am doing the right thing, making the right choices, and then feeling that each step is inherently fraught and utterly messed up.

I have chosen the cowardly way. I have cleaned the dishes and the sink. I have tackled the gross bathroom (though I can’t bring myself to use it). I have collected the recycling and put it in its proper place, hoping that it might make it curbside next week though I will be long gone. I scrubbed the front window of a thick film of nicotine and dog exhalation, so that both mother and dog would have a clearer view onto the outside world.

I thought I would not do the cleaning, or the paying of bills, because it’s a form of enabling. Or at least postponing the inevitable. But then the people at senior protective services never acted on the report of self-neglect I made; never returned the four voice messages I left on the direct line of the one investigator who serves the whole county. It became clear they were not coming to witness the squalor in which my mother lives; would not be impressed with the level of harm to which she neglects herself into on a daily basis; would not be the idealized heroic rescue that could compel my mother to accept supports, seek proper medical care, and no longer starve herself.

I am familiar with enabling behaviors. I watched my grandmother enable my addict-uncle all the way ‘til he overdosed and his body was found ten days later. This is not unfamiliar territory, though it has never been welcoming to me, nor have I ever felt at home in it.

So they didn’t call or come and I decided to enableclean. But I also have said some of the hardest things to my mother that I have ever said to her. Harder than the time when I confronted her about her alcoholism (the one and only time, though it continues to remain relevant and sadly necessary). I told her not only that we are worried about her (we have told her this before) and not only that she was placing herself at risk (we told her and emailed her earlier this year, in long form, the myriad risks and dangers she was reigning down upon herself). I told her that since she refused to let me/us help her with her fucked up finances, that I had consulted a lawyer, and that soon she will have no choice.

Tomorrow I will have to tell her that we have asked to have her driving skills re-evaluated and if she does not submit, her license will be revoked, and that I am not returning to her the key to her car, rendering her without self-initiated transportation, which at this point in her capacity, is really a death machine waiting to be put into gear.

This entry was posted in Dementia*land and tagged cleaning up, coward, dementia, dilemma, squalor. Bookmark the permalink.