When your mother lives three thousand miles from you and your relationship is not a particularly close one, it makes sense that when she attends your wedding, she is bound to introduce herself to new people. As in extending her hand and saying, “Hello, I’m the mother of the bride.”

But not to the bride herself.

And thus begins the story of my mother’s losing her mind. Or our noticing. Or our not being able to look away.

I am not sure how this story will end. Well, I know that my mother will die. And I know that I will. Which is how all stories end, so I’m not sure what makes this one exceptional.

Odds are that she will die first, and not only because she is 26 years older than I am: a lifetime of on-again-off-again depression; of undiagnosed and untreated likely PTSD (both her brothers died young and tragically and at their own hands; sexual abuse took place in her generation of siblings); nearly a quarter century of widowdom; and undiagnosed, untreated, and unacknowledged alcoholism buoy those odds. Not to mention the co-morbid alienation of family members, subsequent severe isolation, and two children who have rooted themselves respectively two- and three-thousand miles away.

However, I am on an airplane as I write this, so I should not tempt fate or the gods. I therefore humbly acknowledge that I could die at any time and before my mother.

And then there’s that whole losing her mind thing: undiagnosed, untreated, and undetected-by-her diminishment not only of her cognitive capacity, but also of her living conditions, and consequently, her dignity.

It used to be, when I was an only mother of two young children, living off a social worker’s salary, we would visit every other year. It sounded legitimate enough, and I suppose people were polite enough to nod in sympathetic understanding, when I would say that our visits were not more frequent because of the expense. Truth lay in that explanation and in other, more historical, more interpersonal landscapes.

Now that I am situated in a more financially sound (but by no means extravagant) circumstance and now that her choices are not rational (and sometimes rather self-harmful) but we cannot compel her or the authorities in the state where she lives to do anything about that, I find myself traveling home much more often. It has shifted from every two years to every year to this trip, which comes three months after the last and just one month after my brother last visited.

We are lucky, he and I, that we share this burden responsibility of caring for our mother. Given the pained history and story we have with our mother, it has not come easy. Given the differing temperaments we two siblings have for conflict avoidance, for comfort in disagreeing with each other and voicing it directly, it has not come easy. We have made a pact, as if signed in blood, that we would not let our care of our mother become a wedge in our relationship.

You do hear stories of this – real-life and fictional – it’s a common risk. But we have made our promise to each other that it will not happen to us. No matter that our actual generational family dysfunction models well for us rupture between siblings that becomes calcified into diamond-tough resentment and jagged-edged forgetfulness.

Like an adolescent couple in love, who know in their bones that they are different from nearly every other couple in the history of humanity, my brother and I swear our oath and declare it will be different this time.

When I came to visit my mother three months ago, I did so in-between work and school obligations. With one day travel there and one day travel back, I was able to spend two days – give or take — with her. It was not much time, but even in that small interlude, something unexpected happened.

I was able to embark on that visit knowing with little hesitance because my mother was dead to me already. She had already stopped being my mother, and not just because of her likely dementia. The toxic residue of our story together had worked its corrosive purpose. And though this might sound tragic, it was in her being dead to me as my mother, in my daughter’s heart turning stone to her, I found the capacity to respond to her suffering as to another, anonymous human being. With my hardened heart, unlike Pharoah of the Hebrew Scriptures, I found that I could let go of both the petty and legitimate hurts and in their place, I felt compassion. 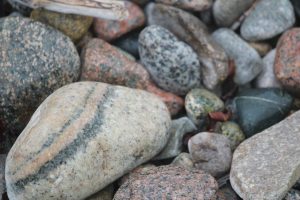 I imagine plenty of people thinking me harsh or feeling pity for my family, neither of which please me. I don’t know if others who have grown up under less than idyllic, less than safe circumstances might be able to identify with this shift. I know that I was thankful to find inside, or alongside, my stone heart, that there was the ability to reach out to this isolated, tragic human creature who was living in filth, refusing all medical care, and generally dying a slow death.

So in all this losing – me losing my mother long ago, my mother losing her mind, me and my brother making every effort not to lose each other – there has got to be some deep purpose. There just has to be.