The title of this sermon – You Say Hello — is an intentional mix up of the lyrics from the Beatles song so ably played as our prelude: Hello Goodbye. The rightful lyrics are

I have to thank Shawn for letting that song be this morning’s prelude. He wasn’t so sure of how that song fit in worship, but given what the choir came up with, with Andy on lead and vocals, it turns out it was not the overstretch I planned to apologize for.  Which is good, because it was hard to resist: I mean, someone here is saying hello and someone here is just about to (in a month’s time) say good-bye.

Be that as it may, I am pleased beyond pleased to say for my own self, and on behalf of the congregation: Hello. And as was just spoken in unison: Welcome home.

You say stop and I say go go go. In fact, not go go go, but go forth, the words written by Rick Hoyt, read on January 24th by Peg Lorenz, the last time Elea was in the pulpit, just before the beginning of our four month sabbatical.

Go forth
Because we are always going forth from somewhere

Going into mystery and questions
Going into the desert
Getting to the other side.

Yes, you noticed correctly. Not HER sabbatical, though surely she got one and you have heard some stories – just now at the chalice lighting, one yesterday as she returned to Facebook, no bout in the weeks, months, and years to come — of what she did and you will be noticing ways in which she has changed – perhaps something altogether new, perhaps something familiar yet deepened; perhaps she will know it, this change; perhaps she will come to know about it because you will have noticed it and reflected it back to her. So yes HER sabbatical, but not ONLY her sabbatical.

OUR sabbatical. For surely it was also First Parish’s sabbatical. It was also our task and perhaps one that is a bit harder: to stay in place while still going forth.

Each month there was a theme for worship that followed an identified process of pilgrimage, of going forth with intention:

Responding to the Call

Making the Way by Walking

Practice of Being Uncomfortable

Some months the words seemed to resonate more deeply than others. Some months, we had not the time or inclination to really focus on the words. Yet we had a shared language – we were on a pilgrimage. The board asked committees to consider how they might take pilgrimages during the year, during sabbatical. Individuals found themselves using the framework of intentional journeying to see their lives’ current events in a different light. Thank you, Worship Committee, for giving us this shared reference that we might weave our web of common life together.

Over and over again, I heard from folks before, during, and just in the past weeks coming upon the end of the sabbatical that this time, this second sabbatical of Elea’s, it wasn’t so anxiety-producing. You all had done it before. It helped to already know the sabbatical minister and have at least a modicum of confidence in her ministry. But you not only survived the last one, you thrived in it, and kept alive its lasting legacy: the presence of worship leaders up here on the chancel. So you knew good things could come from sabbatical. You knew good things could emerge from within you because of sabbatical.

Throughout this sabbatical, you stepped up. Half of the guest preacher slots were filled by YOU. And you welcomed with whole hearts the guests who shared their wisdom and gifts with you. The Healing Conversations group that is meeting right now, creating space for those who have lost beloveds and need space for their grief, their anger, their sense of betrayal and loss – this is run by you. Your newly reinvigorated Pastoral Visitors program stepped up and said, “Yes, church is with you via my presence as your compassionate companion.”

Can I tell you, I experienced some awesome church happen here during these past four months. I saw folks come together in creative and compassionate ways that made me cry with both joy, pride, and longing – longing for the best in us more often.   I watched as people in covenantal relationship with each other struggled to do right by each other, not always getting it on the first go, but willing to try again – in these efforts, I saw profound moments of redemption. I have seen in you the deep capacity to celebrate with each other, to honor each other. And I have seen in you that capacity to mourn, to sit with grief that will not quietly go away or fit into arbitrary timelines or express itself in polite emotions.   I have watched you in action and more than once I have said to myself, “This is damn good church.” I blessed to be a part of it.

Here is one story of damn good church. This winter, your board boldly chose to for the church to do a Reverse Offering – so instead of asking you to take money out of your pocket and put into the offering boxes, to take out of the offering boxes envelopes with $5 and $10 in them with which to Do Good, to Magnify It and to come back and Share Your Stories. All the stories of your doing good are in the back of the Annual Report, but here is one that didn’t make it in there.

Someone, who will remain nameless, was one morning talking at his work of the cool thing that his church was doing. It caught the imagination of his co-workers. Sometime in the afternoon, seven of his co-workers showed up, each with a $10 bill. “Here, give this to your church to Do Good.” And he said, “No, that’s not how it works. You get to decide what to do with it and then go do it. That’s the important part – not just the Good, but the Do.” So they thought about it, and realized that one of their co-workers, a single mom, was struggling to cover the costs of the upcoming birthday of one of her children. By the end of the workday, much to the surprise of that co-worker, she was presented with $225. Talk about not only Doing, but Magnifying, the Good!

Go forth,
Leave behind the comfort and community of one place
Head into the anxiety and loneliness of another.

While I experienced awesome church, it was by no means perfect church. If such a thing exists. There were times when it was messy church. Hurt feelings and disappointment. Communication failing or even abandoned.   Blame where a different response would have been more generous.

Though it was not the primary quality of my ministry, I know that I disappointed some of you.  I didn’t spell your names correctly.  You told me something important to you and it slipped my mind.  I know that there were times I did not respond in the ways you wished and it gave unintended hurt and caused upset.

Though it was not by far the primary quality of my experience during the sabbatical, this was also true for me: there were times I experienced disappointment and concern about how hard it can be at times to live according to our principles and values. So I knew that I was being asked to no longer be you Intern Minister; it was in these difficult moments, I knew you had accepted me as your minister. And again, there was a blessing there.

And when you have been away long enough, far enough,
Done what you’d set off to do
Been there so long
That place too, starts to feel like home

Come back
Come back to the one, universal
Everywhere and every when and everyone inclusive home,
This beloved community of all creation
That you can never really leave.

So you are welcoming back your beloved minister, though some of you are new here, and may not know Elea, or know her well.   This is in part because that’s another thing that you did during your sabbatical: you added twelve new members, the largest one-time number in institutional memory. It is super okay that you came when you did: some of the folks in today’s pews are ones who arrived during that last sabbatical and stayed. This is truly a good place to stay.

So you have heard that when Elea was last in the pulpit, she left a little clue that several of you picked up on right away: “Love is Everything” would look really good on a t-shirt. And so you made it happen. It does, indeed, look good on a t-shirt. And on buttons. And the wayside pulpit proclaiming its truth to the wider world, or at least Main Street in this town. 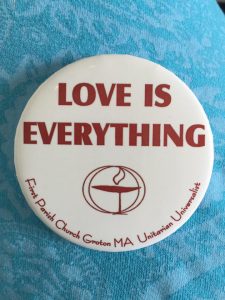 So let me come to a close with this true story.  One to add to our collective response to the poet, Elizabeth Alexander’s question, “What if love were the mightiest word?”

I know you remember that terrible day, last June 17 when nine African American people were gunned down by a young white supremacist man while they were in Bible study at Mother Emanual Church in Charleston, South Carolina? Our nation reeled and grieved with broken hearts. Here was a people loving their god as best and peacefully as they knew how, who had welcomed the stranger into their midst, and he shot them down.

Then came images on our media screens of the young white shooter posing with the Confederate flag before his deadly deed, and after he did it, having been apprehended by the police, being given lunch by them, whereas just two months previously a police officer in that same state had shot an African American man, Walter Scott, in the back as he ran away from a traffic violation. It was too much. It is too much.

In the aftermath of the Charleston shootings, statehouses in the South, national retailers and even NASCAR were forced to decide what to do with their Confederate flags, symbol to so many of a history of institutional racism.

There was the bold act of love by Bree Newsome, climbing the flagpole at the State Capitol in South Carolina and removing the flag. There were the debates – is this flag heritage or is it democratic heresy?

There were counter demonstrations protesting the removal of the flag. Out of one of these emerged a powerful image. It was of Leroy Smith, Director of the South Carolina Department of Public Safety, and state trooper on duty for crowd control, with an elderly man, struggling in the heat, gently guiding him towards air conditioning. The thing is: the elderly man was white.  The thing is: he was wearing a t-shirt with a swastika.  The thing is: Officer Smith is African American.

In an interview with the New York Times, Leroy Smith was asked about why that photo went viral. This is what he had to say:

Love. I think that’s the greatest thing in the world. Love.

So maybe love is everything. And until it is, it is up to us to make it be so.