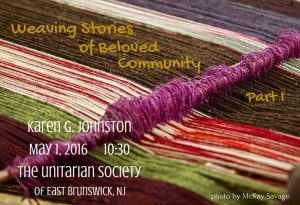 Let me begin with gratitude. Gratitude for this moment, for this breath. Gratitude to finally be here with you. Let me speak gratitude for the many kindnesses and gestures of generosity that have been already extended to me and to my spouse, Tony, who is here today and will be back again next weekend with my older daughter, River. Gratitude for this chance with the words of my mouth and the mediations of my heart to make shine and shimmer this spiritual home that you have so lovingly and steadfastly sustained.

“There is something deeply built into us that needs story itself. …Story is a source of nurture; … we cannot become really true human beings for ourselves and for each other without story.”

So let me begin with a story.

In the basement of my current home there is a painting I did probably something like 12 or 13 years ago.  It’s a large canvas, the length of my armspan. Its colors are bright – like the sun, like fire. The painting orbits around a primary quote from Helen Keller:

Security is mostly a superstition. It does not exist in nature, nor do the children of [humanity] as a whole experience it. Avoiding danger is no safer in the long run than outright exposure. Life is either a daring adventure, or nothing.

I painted this at a time in my life when I needed some encouragement to be daring. I had just adopted two children. On my own. Out of foster care. Previously, my ex and I had fostered these two munchkins, but my decade-long relationship with her had ended, and it was up to me to be the constant in these kiddos’ lives. Though I was raising them in a Village of caring adults – including my home congregation in Northampton, Massachusetts, it was a bold, frightening step I had taken. 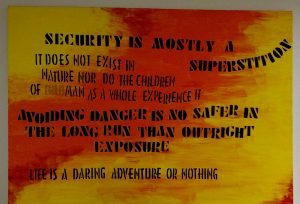 Back then, the painting hung in a room just off the kitchen and I would see it multiple times each day. I needed its constant companionship and reminder. I can’t tell you how many times I broke down into tears during those years, sometimes in solitude, sometimes in the company of good people, known and strangers. I was uncertain what the future held but it was “choiceless” – it was really the only thing I could do. I fell in love with them. They needed me. I needed them.

Eventually, and with help, I bought an old house in a sweet neighborhood. I remember the sense of triumph the day I first mowed the lawn – not a small plot – all by myself. I had been so intimidated: going to the local hardware store, buying the mower itself, feeling butch enough to be the master of that machine. But I did it. I triumphed over that long expanse of green. And then had to do it again the following week.

Raising children. Mowing a lawn. Getting out of bed some mornings. Speaking truth to power. Having hope when despair or numbness or self-absorption seems the more obvious answer. All of these require boldness in the face of uncertainty. Well, maybe there’s not that much uncertainty when it comes to mowing a lawn, but I tell you, sometimes it does require boldness.

I’m going to guess that many of you, perhaps most of you, have heard the term, coined by 19th century philosopher, Josiah Royce, but made familiar by Dr. King: Beloved Community. For Royce, it was the ethical meaning of the kingdom of God, ensuring heaven on earth. For Dr. King, it meant, “there is no graded scale of essential worth; there is no divine right of one race which differs from the divine right of another.”

Reverend Doug Taylor writes about how we Unitarian Universalists use the term Beloved Community to mean different things – for some it is specifically about racial justice making and for others, it describes a healthy, vibrant religious community. Other voices tell us this concept is about a more inclusive world that is within our power to create (The UU Justice Ministry of California).

Here’s the funny thing. Not funny ha-ha, but funny hard. Even if security or certainty does not exist in nature (as Helen Keller reminds us), it turns out that we are hard-wired to prefer it. Neuroscience tells us that our brains don’t like uncertainty; we respond as if it’s a type of pain. On the other hand, our brain steers us towards certainty, even when it might not be in our best interest.

So what’s a human to do?

We can start by slowing down, quieting down (our lives, our days, our monkey minds), and listening. Listening, often, to stories. Real stories of real lives. Stories that the earth and the universe, art and music are telling us in language that is not words – perhaps it is mathematics or quantum mechanics; perhaps it is the combination of melody and harmony or the complementarity of colors, but is story nevertheless.

Though it is not fully here yet, I have come to believe that Beloved Community is available to us already, albeit in finite moments, transitory as they are, real nonetheless. Perhaps you have had such encounters – fleeting, but nearly tangible? These moments of Beloved Community call out to us like the Indian novelist Arundhati Roy suggests:

“Another world is not only possible, she is on her way. On a quiet day, I can hear her breathing.” 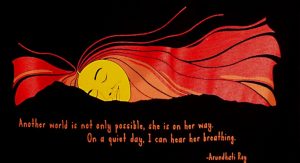 Beloved Community is not only possible, she is on her way.  When we de-center the impulses of profit, accumulation, and materialism while setting as our guides community building and expanding our notions of whom we claim as kin, we can hear her breathing.

Beloved Community is not only possible, she is on her way. In the streets, when people are marching and moving, when people are setting aside some outdated sense of respectability politics and patience, calling politicians and corporations and law enforcement to account, when people are showing up with love in their hearts and justice on their minds, facing their fears of what might seem inevitable (another Black or Brown person killed extrajudicially, another fracking pump sited and built), when folks are facing these fears with no certain outcome — we can hear her breathing.

Beloved Community is not only possible, she is on her way.  In 2013, in front of the White House, the first large gathering of peple showing up to protest the Keystone Pipeline, Bill McKibben –who had been writing, and organizing, and protesting about climate change since before 1989, but often feeling alone or heard by few people, he said this:

“All I ever wanted to see was a movement of people to stop climate change and now I’ve seen it….I cannot promise you we’re going to win, but I’ve waited a quarter century to find out if we were gonna fight. And today, at the biggest climate rally by far, by far, by far, in U.S. history — today, I know we’re going to fight.”

That was only three years ago.  35,000 people attended that rally.  Was anybody in this room at that rally in front of the White House in 2013?  Fast-forward a mere 18 month later to the People’s Climate March in New York, September, 2014.  TEN TIMES THAT.  Anyone in the room there in NYC?  In the marching of those feet (your feet), we could hear her breathing.

Beloved Community s not only possible, she is on her way.  In those interpersonal interactions where, to live into the First Principle of Unitarian Universalism, affirming the inherent worth and dignity of every individual, we show that all lives matter by affirming with our voices, with our actions, with our choices, that Black Lives Matter — when Black Lives continue breathing, we can hear her breathing.

When I am uncertain, or in despair, one of the folks I turn to for a needed infusion of hope is the Buddhist scholar and environmental activist, Joanna Macy.  I have developed workshops and rituals deeply influenced by her work, which I look forward to sharing with you.  Joanna Macy has this to say to my uncertainty — and perhaps, to yours:

…there’s absolutely no excuse for making our passionate love for our world dependent on what we think of its degree of health, whether we think it’s going to go on forever. This moment, you are alive.

When I fully take in the message of these words, I begin to remember – for I have been in this place of uncertainty before and I will be here again – that Beloved Community is not built on certainty, or comfort, or consolation.

Beloved Community is not Beloved Certainty.

I think another thing you will hear often from me – perhaps from the pulpit, perhaps as I sit as your companion to some of life’s hardest trials, perhaps as I befuddle myself with my own clumsy attempts at this human endeavor of living a mortal life – you will hear me play, sing, praise, curse, investigate, worry, and make art about paradox.

There is a saying that a minister really only preaches one sermon, but multiple, possibly infinite, variations on it over their lifetime. If that is the case, then I think my one sermon will be on the spirituality of paradox: how we make meaning in the face of chaos, in the face of contradiction, in the midst of…well, here it is again: uncertainty. I think it is why I wanted to bring Krista Tippett’s words into our service this morning: how she raises up that which might be considered broken has a deep and essential wholeness, that what we fear, if we face it, might be the very thing we need not only to survive, but to thrive, to… dare I say it? to build Beloved Community.

Let us remember that security and certainty are mostly superstition – even if our brains are hardwired towards them. Let us live into the reality that Beloved Community is not only possible, she is on her way. Let us tell stories that nurture, stories of all kinds of messy, shiny, mundane, courageous truth. Let us find that place in our collective selves that allows us to hear that new world breathing. Let us live into a life that is a daring adventure. Let us be alive now together. 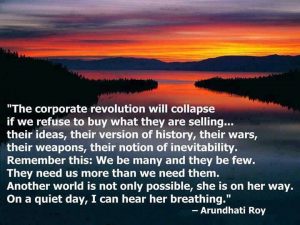 Junker, Evan.  “Beloved Community: The How, What and Why of Our Work,” December 23, 2014, http://uujmca.org/justicejournal/beloved-community-how-and-why-we-do-our-work/

Macy, Joanna and Molly Brown. Coming Back to Life: The Updated Guide to the Work That Reconnects. New Society Publishers, 2014.

Tippett, Krista. Becoming Wise: An Inquiry into the Mystery and Art of Living,” Penguin Press, 2016.