This week, in the city where I live, the mayor endorsed the installation of a Black Lives Matters sign on the City Hall building.   Downtown.  On Main Street.  On the front-facing facade of the building that is the seat of local government.  With the support of the city police chief.  Hundreds came out in support of this public statement for justice and for fair, effective policing.

As I understand it,

Last summer, I placed a Black Lives Matter sign on my front lawn. 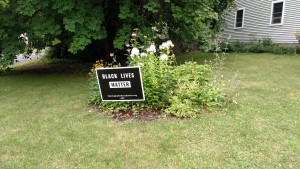 As part of a local effort of Showing Up for Racial Justice (SURJ), I knocked on doors in my neighborhood.  I spoke with my neighbors about our nation, the state of affairs when it comes to race, and how my heart is breaking.  I wrote about that experience here.  Some neighbors talked.  Some did not want to.  Some were not home.  I have become friendly with more neighbors because of our meeting each other this way.  Two of my neighbors took signs and placed them in their yard, where they continue to be to this day.

About two weeks ago, someone decided to steal the sign in front of my house.  It turns out, this is not uncommon. 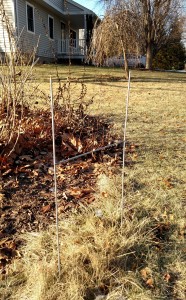 So today I replaced it. 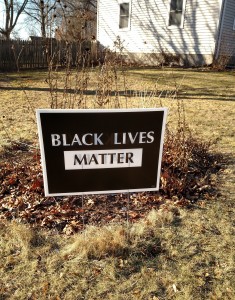 “For there is hope for a tree,
if it is cut down, that it will sprout again,
and that its shoots will not cease.”  Job 14:7

May the Black Lives Matter movement be like the head of Hydra: where there is an attempt to slay or slow it, may it come back with double the force and power to bring justice to our land.

“If I go to prison, if anything happens to me, a million others will spring up to take my place.”  Marcus Garvey

One thought on “Black Lives Matter: When You Remove One Sign, Three Takes Its Place”