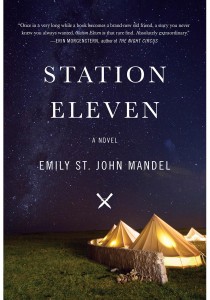 Generally I leave dystopian novels and movies – fictional stories about dehumanizing world futures — to the young people in my life, but recently one novel, Station Eleven, had been recommended to me by several someones in a way that I could not ignore. So when I was supposed to be reading Unitarian Universalist history and theology, I chose, instead, to read Emily St. John Mandel’s novel about the end of the world.

And, as it turns out, the beginning of a new one.

“Bereft” is what I felt every day for several weeks after I finished the book. Bereft not because it was such a dismal forecast of our future.  But because I so deeply and actively missed the characters in the story, because I so wanted to know what continued to happen to the Traveling Symphony. I wanted to know what it looks like to live through hell and come out on the other side – to create the other side together with the people with whom one is thrown together by some mysterious combination of chance and choice. 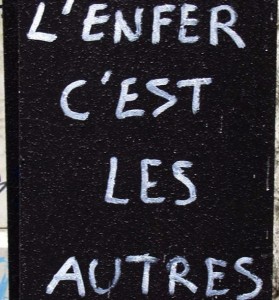 In our reading we heard the rather cynical quote from the French philosopher, Jean-Paul Sartre that, “Hell is other people.” This caught my attention because as someone who is basing not only her professional life, but her spiritual survival, on congregational life – the act of humans congregating – I wanted in one breath to say “No way” – for I have experienced great joy and saving grace in community — and “Amen” – for I have attended more than my fair share of committee meetings…

I have a t-shirt. It says, “Love the Hell Out of This World.” I bought as a fundraiser from the Unitarian Universalist Christian Fellowship. Its message is emblematic of the Universalist side of our faith’s heritage, the one that says God (and you can substitute “Nature of the Universe” here, though the Universalists did not)– God is Love.

The Universalists also articulated the notion that hell does not exist; not, at least, in the traditional Christian sense: a supernatural place to where the damned are condemned to spend all eternity. The Universalist idea that there is no hell was heretical in its time. If there is no hell, and no subsequent fear of damnation, what stops people from falling prey to all manner of temptation? Universalists were often the first suspected when a crime was committed, for it was believed that Universalist churches must be “complete dens of iniquity”.

In truth, Universalists believed in hell, just not the supernatural, moralist one. They believed in the hell we make on this earth, for each other and for ourselves. Quillen Shinn, the itinerant, horse-back riding Universalist preacher once said, “There is no hell for any of us to fear, outside of ourselves.”

If it is not some fiery eternal pit below us, what then is hell?

Being a modern minister, rather than consult scripture or even Our Six Sources, I consulted …Facebook. I asked people to describe their personal hell. Some people responded with what I have come to understand as examples of “lower case” hell:

Others responded with stories of Upper Case Hell, some of which took my breath away and left me whispering prayers of compassion out into the universe:

Nothing not real about those hells. But I didn’t need to consult Facebook to know that hell is real and neither do you. Our lives, the lives of our fellow humans – ones we love dearly and ones we do not know — are testimony that that there is great suffering – another name for hell.

So it turns out that hell is not a dogma, or a belief, but is a condition, is an experience, deep and at times, seemingly inescapable.

It stands to reason that if there is no hell outside ourselves, then whatever we call its opposite – call it heaven, call it paradise, call it transcendent joy, call it everlasting peace – is also of within ourselves, and may well be of our collective bringing into being.

Now, if we were going to make a list of experiences of hell on earth, disasters, natural or human-made, would be at the top of any list. Rebecca Solnit – whose name you will hear again at the end of January, for I find her writings so juicy and compelling –wrote a book published five years ago called A Paradise Built in Hell. In it, she shares oral histories from survivors of past disasters and interviews with people having survived modern catastrophes.

Solnit found that rather than being the dystopian wild chaotic hell so often depicted, earthquakes and fires often bring out an intuitive impulse to organize into communities of mutual aid in the midst of which people open their hearts to utter strangers, take on each other’s burdens, and find in this camaraderie elemental aspects of joy available to them in no other circumstance.

For instance, she describes the 1906 San Francisco earthquake and subsequent fires that razed neighborhood after neighborhood, where 3,000 people had died and half the city was homeless. She writes,

Despite or perhaps because of this, the people were for the most part calm and cheerful, and many survived the earthquake with gratitude and generosity.

She tells the story of the Mitzpah Café, established in the debris by one of the very people who lost her home, Mrs. Anna Amelia Holshouser, a soup kitchen that served quake refugees and offered a paradise built on the rubble otherwise known as hell. Generosity, humor, and joy were the hallmarks of this temporary café cobbled together in the midst of devastation. Or this testimony, a hundred years later, of a medic working during Hurricane Katrina,

How are we called to respond to the hells that exist here on earth, in our time? How do we care for those among us who labor under the hellish suffering that makes some episodes of clinical depression so seemingly intractable? How do we respond to those whose lives are spent in the hell of walking on eggshells, tip-toeing around loved ones who lash out in violent ways? What can we do for those in that hell of grief – temporary that we pray it is – when we lose someone so beloved in our lives that it sucks the air from our lungs? How do we respond when nations and small, powerful bands of outlaws, continue to study war, forcing hundreds of thousands of people to live in terror, to flee from their homes and all that they know, seeking refuge amongst strangers?

How might we be part of creating beauty in the midst of such devastation? How might we love the hell out of the world?

I’d like to tell you the story of Samantha Jackson and Farzin Yousefian, who were going to get married, planning to spend tens of thousands of dollars on their lavish wedding. It was scheduled for March, next year, and they had already booked a venue, hired caterers and invited people. Then the Syrian refugee crisis. Then, in September, that heart-breaking photo of three-year-old Alan Kurdi’s lifeless body washed ashore on a Turkish beach. Such hell for that child’s family; such an indication of the hellish conditions the refugees were fleeing, as well as what they had to endure in seeking safety. So in October, the Toronto couple canceled their wedding plans, held a small ceremony at city all, and asked that instead of gifts that donations be made to sponsor a Syrian family. Perhaps we should send Samantha and Farzin one of those Universalist t-shirts?

In Station Eleven, in the midst of a hellish chaos after most of humanity has died and civilization has collapsed, the remnant of humanity thrown together must make their way together to survive.  Yes, some express that cynical “hell is other people” feeling – don’t we all at one time or another?  Yet, the story ends with a very different conclusion, deciding that “hell is the absence of the people you long for” and that “what [makes life] bearable [are] the friendships, of course, the camaraderie and the music and the Shakespeare, the moments of transcendent beauty and joy” you find among these people with whom you have cast your lot.

We here in this congregation and we Unitarian Universalists gather together not because we all share the same beliefs, but because we believe that in gathering together, in returning to each other, even when it is hard, especially when it is hard – might I say, when it is hell-ish – we embody something holy in our spiritual and religious journeying. This is what it means to be a covenantal, rather than a creedal or dogmatic, religion. 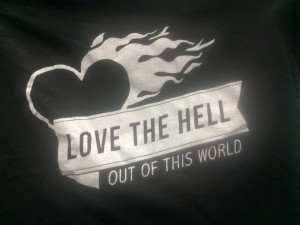 May each day we covenant to walk with one another, that we bring Beloved Community into being, that we do our part to bring paradise here on earth, that we are love the hell out of this world.

Blessed be. May it be so.

2 thoughts on “If We Don’t Believe in Hell, Does It Exist? (sermon)”