Part I: Wading into the Waters

I am not an activist.

(My activist friends are trying hard not to bust out laughing, because this is so obvious.)

Certainly, not the kind who regularly goes out on the front lines, who stops traffic, who risks arrest. I am more than willing to learn, to listen, to reflect, to examine, to challenge, to grow, to advocate, to re-vision, to ally, to be held accountable, to hold accountable, to march, to educate, to speak, to donate, out, to speak up, to amplify, to read, to blog, to publicly mourn.

I was once arrested for civil disobedience. That was nearly twenty-five years ago — during the First Gulf War. I did partake in an action described by detractors as vandalism but which we understood as holding rapists accountable and raising visibility of sexual assault in a community sorely in need. But, again, that was more than a quarter century ago. I don’t sit on those laurels any more — haven’t in a very long time.

We live in a time of great hope and possibility, yet the potential for a just world for all of us is not possible when racism and oppression keep us divided. This can make us forget how closely connected we truly are. Racism is still present throughout all of our contemporary institutions and structures. Racism is devastating to People of Color and is closely intertwined with all systems of oppression. It robs all of us- White people and People of Color- of our humanity.*

I have my socially-constructed white skin color and my new-to-me, always-temporary class comforts of enough income. I have too much education (one course away from my second masters degree) and speak with acceptable diction. I live in a gender-conforming body and experience few barriers in accessing any place I want to go. I experience privilege in so many ways that allow me the illusion that activism is a choice, is a life style into which one can opt.

On top of all that, I have a temperament that does not lend itself easily to street-level activism – though I can visit that realm, I am much more a tourist than a resident.   I am much more comfortable with other forms of social change – ones that are, not coincidentally, less demanding of courage and the possibility of confrontation.

We honor and learn from the long history of People of Color and White people who have been unrelenting in their struggles for racial justice, and ending all systems of oppression. We are showing up to take our responsibility as White people to act collectively and publicly to challenge the manipulation of racist fear by the ruling class and corporate elite. We know that to transform this country we must be part of building a powerful multi-racial majority to challenge racism in all its forms.*

I sometimes wish I was the kind of activist who goes out on the front lines, who stops traffic, who risks arrest. I wish to be the kind of clergy who stands as an oasis of calm between a too-nervous-for-comfort police officer and a raging protester. I admire the courage of such clergy: their clarity, their bad-ass-selves. Just maybe, that will be me one day.

While I am wishing, I sometimes need a kick in the ass to remember that I can do what I can do, even if it doesn’t look like that version of activism.

In that spirit, I recently joined the door-knocking campaign started by the fine folks at SURJ.

SURJ is a six-year old national network organized to “engage and move white people towards racial justice action.” It is “rooted in longstanding white anti-racist efforts and leadership, along with strong relationships with organizers and leaders of color.” (Thanks, Chris Crass, for those quotes.) Since last summer, with the killing of Michael Brown in Ferguson, Missouri, new chapters and members have been met with new projects to mobilized this growing base of white people who want to do more than just feel bad or angry or depressed about what is going on.

This particular project was inspired by grassroots efforts in St. Louis called the Anti-Racist Collective (ARC), where they brought yard signs that said “Black Lives Matter” to predominantly white neighborhoods. According to the organizers, of those people with whom they spoke, half took a sign and agreed to display it, as well as to learn more about that organization’s efforts.

According to the national SURJ web site,

We are taking up the project of door-knocking with Black Lives Matter yard signs in hopes of providing local organizers with tools to initiate conversations around race in predominately white communities, and to build larger bases of white people to take action for racial justice.

My local chapter of SURJ – WesternMass SURJ — decided to join with other communities across the country and do this same action.

Earlier this month, I attended a meeting with about forty other people. First of all, we beheld one another. Forty people! More than expected. With representation across at least three generations. We learned more about the goals of this campaign: to increase invisible support for #BlackLivesMatters and to create opportunities for conversation about race and racism among white people. We examined our fears about taking part in knocking on doors, as well as our hopes.

Everyone’s biggest fear was different. My most noticeable anxiety was door-knocking in my own neighborhood — what if one of neighbors is a real a**hole about this and there is an awkward residue after we encounter each other? (If this is my biggest worry, this is the proof of the ocean of racial privilege in which I swim daily.)

We left the meeting with a suggestion-only script (well intentioned, but a bit too stilted), helpful instructions, and some yard signs to hand out.

Despite my anxiety, it made sense for me to do it on my own street: this is where I have relationships, this is where someone might be more likely to listen to me when I knock on the door. As one of the other people attending the SURJ meeting pointed out: maybe I would have the opposite experience. I might discover reactions from neighbors that would give me hope.

Upon my arrival home from the meeting, I immediately planted one of the yard signs in my lawn. I live on a corner, so it would have good visibility. The first step in the dipping of toes! I wasn’t yet knocking on doors, but I was publicly casting my lot with the #BlackLivesMatters movement.

I wondered what the reactions would be? I wondered if the sign caught anyone’s attention or whether they just drove by. I worried it might be defaced (it has not been). It did not take long before I found out.

On a sunny afternoon, I was in my house with windows open. I heard two little girls riding their bikes past my house. I could not see them but I could hear them. One of them read the sign aloud in that halting way that reading is a newly-acquired skill. This caught my attention, so I listened more closely. As if speaking to no one in particular, the girl said, happily, “Well, of course they do.”

The next day, I was at home and on the phone. The doorbell rang. My younger daughter answered it. Later, when I was done with my call, I asked my daughter who had been by. It was a neighbor, several houses down, someone I had never met though I had seen her in her yard numerous times. She had come over because she had seen the sign. She wanted to thank us.

I was sorry to have missed her and decided to take a chance. I went over to the house I thought was hers. I knocked. She answered, wearing the orange dress my daughter had described. She smiled. I smiled. We learned each others’ names. We talked, which is to say she told me some stories and I listened. We hugged. Perhaps you guessed? She is African American.

It was an incandescent moment. It cemented my intention: ready or not, I would go door knocking.  (Click here for the next post in this series.) 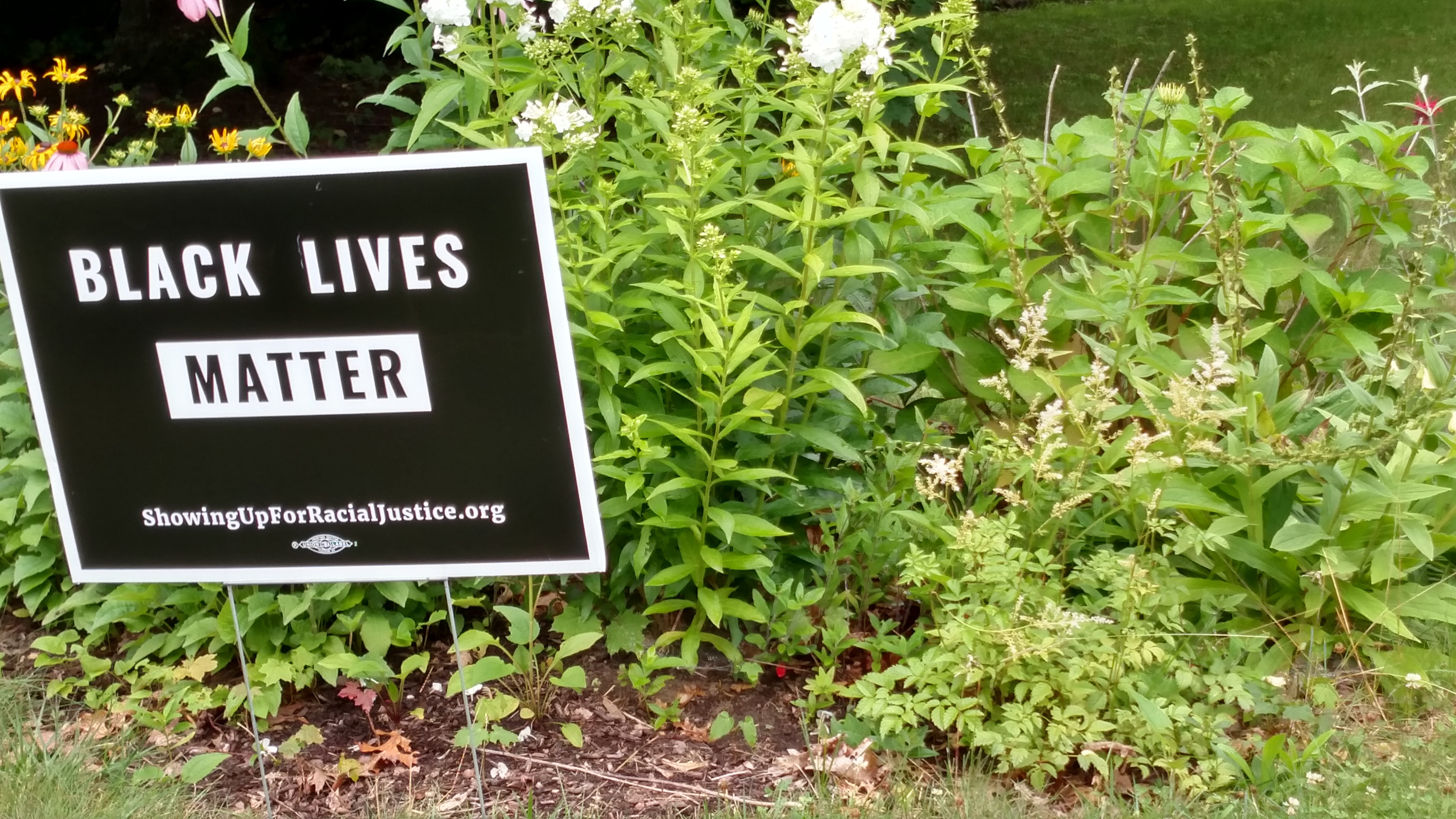 * These words are from the information sheet prepared by the local SURJ folks using national SURJ materials to handout during  door knocking.

One thought on “Showing Up for Racial Justice: One White Person’s Wading Into Waters (Part I)”