Another compelling post from friend and colleague, Adam Dyer.​ Rock on and write on!

It is more generous than deserved, but so it is with Adam’s spirit. His post, entitled, “Not over…” ends thusly:

“So, I don’t have an answer to how or what form or why Southern pride will be reborn once the Confederate Flag is uniformly relegated to history books and museums. I do, however, know that Southern pride is very real and a valuable part of what makes the United States what it is. My earnest and sincere hope is that the people of the South are able to find the part of Southern heritage that they can celebrate that doesn’t celebrate the denial of my heritage as a black person.”

Adam’s post identifies that universal truth: nature abhors a vacuum. Just because the flag is down (or coming down), does not mean that racism is ended (not that anyone thinks that, but I still thought it worth mentioning). And if there is a seed of truth in the apologists’ declaration that the Confederate flag was a symbol of pride, then the vacuum needs to be filled and filled soon before it is filled with problematic stuff.

Here is our opportunity. Even though I am from the North (well, really, I am from the Pacific Northwest, but I am not from the South, so I guess that means, for these purposes, that I am from the North.), I would like to take on this challenge.  My apologies if I step on any well-intentioned Southern toes with my Northern sensibilities.

That said, let’s fill the vacuum left by the removal of the flag with Southern heroes of all stripes.  And since it is so important, because there is such a dearth of these stories out there, let us fill that void with Southern white heroes.

Here is my contribution. These are the people from whom I learned anti-racism work as a white person. Some of them I have known in person. Some of them I have done my learning through reading their writing or listening to their talks. These are the people who made it possible for me to see that as a white woman, I had a role in creating a racially just world besides feeling guilt and shame.

Lillian Smith, author of Strange Fruit and Killers of the Dream, is likely the most well-known of these names. Her books were banned in some localities (not just in the South, friends, but even in Boston) and not allowed to be sent via the United States Postal Service (until, according to Wikipedia, Eleanor Roosevelt asked her president husband to lift the ban). She was outspoken both on issues of race and gender. Born at the turn of the 20th century, she died the year before I was born.

Minnie Bruce Pratt is an educator, poet, and feminist author. I first met Minnie Bruce when she was a visiting lecturer at my undergraduate college. She was frank and funny, kind and clear-spoken. We maintained a minimalist correspondence and when I moved to Washington, DC, we met. She encouraged my poetry writing, though I think she was more generous than what my writing called for (thank you, Minnie Bruce!) She is one of my earliest role models around what is now called intersectionality: how race, class, sexuality, gender identity combine and require more of us than a silo’ed approached.

Mab Segrest, another winner when it comes to getting the crossroads of race, class, and gender/sexuality. Mab wrote one of my all time favorite books of short stories: My Mama’s Dead Squirrel: Lesbian Essays on Southern Culture. I have never met Mab Segrest, but her influence on my understanding racism and the potential of my role as a white ally is huge.  She organized against the Klan in North Carolina in the 1980s.  In 1990, she spoke at a conference in Boston I helped to organize to celebrate the life of Audre Lorde before that fabulous, fierce activist died. I recommend her autobiography, Memoir of a Race Traitor, to any white Southern person I meet. 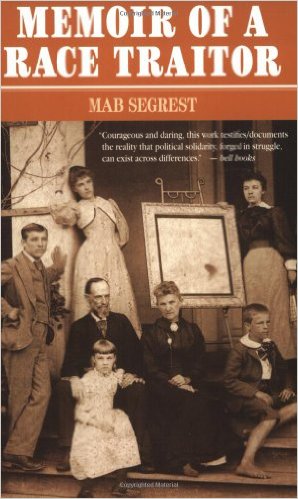 Segrest wrote these words, which I hold dear:

We need a [Beloved Community] that is by necessity anti-racist, feminist and democratic; a politic that does not cut us off from other people, but that unites us with them in the broadest possible movement. … What I really mean is a more genuine democracy, where the citizens of our country have more direct access to all the decisions that affects us, not only in the political but also in the economic arena. …What I mean is a less lonely society, where we think collectively about resources for the common good, rather than struggling individually against each other for material and psychic survival.  What I mean is a more humane society, where our driving motive is abundant life for all rather than increasing extravagance for a few and suffering for many more…. This re-energized movement will be, in Suzanne Pharr’s eloquent terms, “not a wedge, but a bridge;” not a point of division, but of expansion and connection.  To those who insist on denying us our full humanity, we will insist on the sacred humanity of all people.  A bridge, not a wedge.  A bridge, not a wedge. (excerpt, “A Bridge, Not a Wedge,” Mab Segrest, Memoirs of a Race Traitor, South End Press, 1994)

Carter Heyward is an Episcopal priest, one of the first women ordained as such, back in 1974. In college, I read one of her books, but I also got to spend time with her as she taught at the seminary my ex-partner attended. We had dogs that played on campus together. She had been a member of the Mudflower Collective, which produced God’s Fierce Whimsy: Christian Feminism and Theological Education, which helped me to engage spiritually and theological in issues of cultural identity and resisting racial, as well as other, oppressions.

To a one, these women are not only Southern white women, they are Southern white lesbians. This is not coincidental, but neither is it solely a consequence of who my early influences of choice were, given that I was bisexual, living in a lesbian relationship, and living happily within mostly lesbian or women community.

Some of the worst racism in our nation exists in the South (yo, North, this does not let you off the hook).  Yet, also, some of our best truth-seekers and justice-makers come are rooted there, too.  The presence and activism of these Southern white lesbian women taught me that the fires of oppression — especially the presence of oppressions — create great destruction, but they also can be refining fires that give us diamonds of people who develop courageous insights and take that step to use their own privileges towards our collective liberation.

Thank you, sisters, one and all.

No doubt there are others. I invite you, Dear Reader, to expand our horizons. Please add to the list by commenting below. Give us names of white people – (no need for them to be just lesbi

White Southerners are better for this particular exercise, but any white person working for racial justice can be added here. No need for them to be famous. Perhaps you have a personal story to share – that works, too. Please share something about why you placed them here: your own words or a link to help all of us learn.

Let us bring to life Adam’s words that “Southern pride is very real and a valuable part of what makes the United States what it is.” Let us make the names below into household names.