In the early 1980s, we all lived under the pale of mutual nuclear destruction.  Are you, dear reader, old enough to remember?

I was in high school then and I took this very personally.  While others were out partying, or working, I was reading Jonathan Schell’s Fate of the Earth.

In general my parents could not afford to send me to summer camp. Plus, where I grew up, nobody did that.  But one year, they cobbled the money together for me to go spend a week at a local public university for a program designed for high school students to study the impact of nuclear despair on fiction.

Yeah, I was really fun to hang out with when I was 14…

Back then, as I still do, I collected quotes.  Lucky for me — and for you — even at 14, I had more or less good taste. Not consistently mind you, but some of my choices stand the test of time.  Here is one that continues to keep me good company:

“I don’t know how long we have. We have to do this work because we believe in peace and in building peace. We start with ourselves, our communities: the circles get larger. If the bomb falls tomorrow, there’s something so valid about living this way, that we would live this way anyway.”   (Elissa Melamed)

We don’t live under the same nuclear pall we did thirty/thirty-five years ago, but we could change out just a few words and that quote would still hold its message:

“I don’t know how long we have. We have to do this work because we believe in the interdependent web of all existence and in honoring our place in it. We start with ourselves, our communities: the circles get larger. If the planet dies tomorrow, there’s something so valid about living this way, that we would live this way anyway.”

Full disclosure: though I aspire to live such a valid way of living, I do not often find myself doing so.

Despite attempts to always have a travel mug with me, I don’t, and thus end up with so-called disposable containers for my coffee, or my food.

Completion of this seminary degree has required a hellish amount of driving miles, which has a certain irony for a minister in the tradition that claims Universalism which rejects the existence of hell.

I am still not quite sure what the phrase “perma culture” means though I understand it to be one of the ways we can walk lightly on the earth and holds substantial promise as a way for us to live into the Great Turning, rather than the Great Unraveling.

Last week, I could have re-arranged my schedule and added my body and voice to Harvard’s HeatWeek, a collection of powerful voices pressuring the university to divest of fossil fuels…but I did not.

I fear removing my shoes and walking barefoot because beneath my feet I will find the crusty, sharp edges of my own complicity.

I do not do all that I can. I do do some things.

I haven’t eaten meat in a quarter century (the meat industry is a huge source of greenhouse gases, as well as a great example of humans striving to live outside sustainable means, particularly if you look at the typical American meat diet).

I used my financial resources to acquire a (used) hybrid car to be more responsible as I drive all those hellish miles.

I have pledged that at least half of my clothes (on average) are second-hand – acquired from sources like Salvation Army, Goodwill, and Savers (and occasionally, Ebay). Each morning, when I walk out of the house, I assess the percentage of recycled clothes that I have on that day; a good day is 66% or more! This has been my practice for well over fifteen years, if not longer.

And yet, I am aware that any solution, if there are any effective ones, will not come from individual actions, but from collective ones that hold systems, not individuals, accountable. Solutions that demand immediate and comprehensive change not by little ole you or little ole me, but by those in power: corporations and nations.

Part of the problem is that we’ve been victims of a campaign of systematic misdirection. Consumer culture and the capitalist mindset have taught us to substitute acts of personal consumption (or enlightenment) for organized political resistance. An Inconvenient Truth helped raise consciousness about global warming. But did you notice that all of the solutions presented had to do with personal consumption — changing light bulbs, inflating tires, driving half as much — and had nothing to do with shifting power away from corporations, or stopping the growth economy that is destroying the planet? Even if every person in the United States did everything the movie suggested, U.S. carbon emissions would fall by only 22 percent. Scientific consensus is that emissions must be reduced by at least 75 percent worldwide.

In the end of that article, Jensen goes to a place that I am not willing to go to – that activism is the only way to respond to the crisis confronting us. I can’t not join Jensen there because he’s wrong; he’s not. This crisis needs activists. Active activists. More  than there currently are.

But there are other ways to engage this crisis, to do the work that Elissa Melamed was describing. Joanna Macy describes three ways to actively move us away from the Great Unraveling and toward the Great Turning (I have blogged about it here.). Activism is one, which she refers to as Holding Actions. But also there is creating life-sustaining activities (she calls them Gaian Ways) which create the world now that we want to see (hence, perma-culture; hence, cities and towns built for walking and riding bikes, not using cars; hence raising children who give and create, rather than take and destroy) and shifting consciousness and staying awake (and helping guide others, replenish others) for this next stage of our (nature’s) life on this planet.

I am still working out what I can do.  There might not be enough time for me to keep working out my part, and I am not sure what to do about that except to keep doing what I am doing the best that I can. Some days are clearer, cleaner than others.  Most days — who am I kidding?  all days — are complicated and messy.

I bet you are, too. If not, I invite you to.  I invite you to take into your heart, as I will keep doing myself, day by day, one day at a time, the words of 19th century Unitarian minister, Edward Everett Hale: 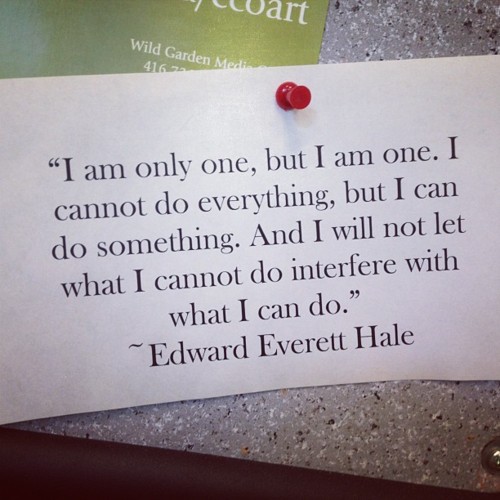 Update on next day’s sense of hope: click here.