It was supposed to be a pinnacle evening. I must say, a pinnacle among pinnacles, because this trip has been full of amazing encounters and experiences. Flush with them. It’s been invigorating and exhausting and thrilling and inspiring. Tonight was a chance to express our gratitude to some of the people who have shown us such amazing hospitality and generosity — not just of material things, such as food, but of their time and joy in our shared company.

It was a special meal at what falls into the category of dinner theater, but, whoa, on a scale to which I have never been exposed. We were asked months ago to dress up, so we packed accordingly. There was a nearly palpable excitement as we looked forward to the evening. I

nstead of being guests, we would host these people who have shown us such generosity of heart. A select few would accompany us to this dinner billed as a chance to be exposed to a cultural display of traditional dances from this corner of the globe. It was taking place at the Karaweik Palace.

As our van approached the restaurant, even from blocks away, it was clear that this was going to be a very different and special experience. Restaurant seems like an inaccurate term — it was much more a destination. It sits on a lake, is lit up at night, and is set apart by this lighting, and then the dark lake distancing itself from other parts of the urban landscape. It was built like a giant boat in the shape of traditional boats still seen in use on the rivers here with two gigantic ski-like pontoons on either side, though these were gilded and elegant. It struck me more as a floating palace, golden and crimson colored, looming huge as we walked toward it. Perhaps the “oooo’s” and “ah’s” were only in my head, but I think some of them from our group might have been audible. The chatter amongst us certainly was electric. 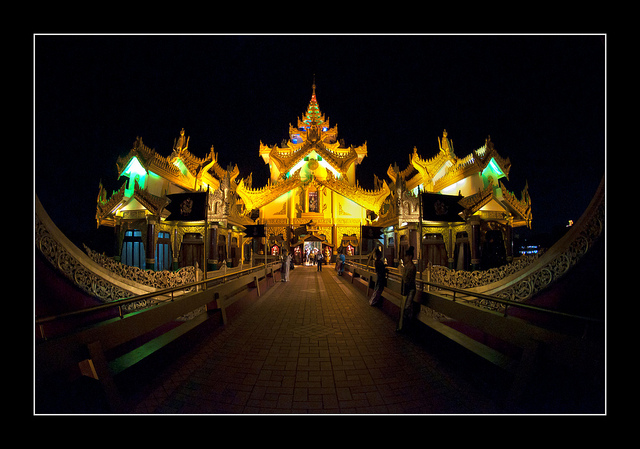 Yet a feeling of dissonance and of mental/emotional contortion began to clamor in my body. We walked the dock bringing us aboard the boat. Along it were employees of the restaurant. The first two sat on a platform to the right. A man and a woman, dressed elegantly. The sign in front of them explained they were from the 17th century. They struck me as living dolls, a kind of breathing wax museum exhibit, portraying an historical scene for our benefit.

The aversion in me was strong. I used self-talk to soothe, though I knew there are few others on this trip with whom I could share my confusion and upset without getting a blank stare. Still, I wasn’t sure I fully understood it myself. I found myself trying to ease my own dis-ease with recognition that these two people were actors who had a job in a place were not everyone had work. Who was I to dismiss this?

Then I walked about ten paces forward. There I found an even more heightened reason for my dissonance. On another platform, another two people. This time, two women, but no sign indicating who they were or the purpose of their display. Two women, clearly indigenous, dressed in their traditional clothing, enacting their traditional trade (weaving). One of them wore, not as costume, but for real, the brass coiled neck ring that extends the spine and unnaturally lengthens the neck. The kind of thing that is placed early in a girl’s life and that if removed, the spinal cord has been stretched beyond its original functioning, so the woman (it’s always women) die from a broken neck.

There was not even a sign to let us, with our post-colonial gaze, know who their people are or which part of Myanmar they hale. They were wholly erased except for the experience of the voyeur. Who was me.

My own complicity was sickening me.

There was not much I could do. I suppose I could have thrown a royal shit fit, or even a quieter one, a political rant directed toward my companions to NOTICE! I could have anticipated that this was indicative of what might be to come and return to the van, allowing my companions to enjoy their night out unmolested by my pull toward stagnant solidarity and desire to remove myself from this particular act of complicity in the power differential all around us, but highly concentrated at this particular location and time.

I decided that I could not — I would not — walk past them. Such would have only sickened me more. So I chose to stop. Not for long, but for a significant period of time, in front of these women. I chose to behold them, not view them. I chose to see them, not gaze at them as I passed by on my way to greater pleasures. I looked each in the eye, which meant that each also looked me in the eye. A small gesture of shared humanity, of equal footing, of their human dignity (and hopefully mine). I made a gentle bow to each of them.

It was not easy to look at that brass neck ring. My revulsion was strong, and with it, too, I must acknowledge, curiosity. Of course, the revulsion was not at her, but at this gendered cultural practice and our exoticization of it.

One of our local companions was near me, so I asked about the women and their place in this society. It was not enough for just me to learn, so I approached some of my peers, told them the name of the people to whom these women belonged: an act of trying to re-ascribe their humanity erased in so many ways. As if when we know and say out loud their people’s name and place, we might restore some of their stolen dignity, shifting them back from nameless objects on view, a perverted appetizer before our culturally-infused meal.

I did not go back to the van. Instead, I partook in every part of dinner, surfing the wave of both aversion and pleasure. I ended up sitting next to an instructor from one of the local seminaries, a man who teaches inter-contextual theology. Perhaps this was a gift from the universe or god or whatever you want to call it, but given his field, it meant that he might understand my discomfort and distaste. He and I had already exchanged pleasantries earlier in the evening and I knew that I liked him.

He had never been to this Disney-esque restaurant before, either. Of course he hadn’t. In addition to the whole financial issue (this place was pricey and out of reach of most of the population), this was not made for people of this country. Everyone working there was from here, but everyone eating there was not. Europe. India. Japan. Probably China. But not here.

I decided to take the risk and move beyond pleasantries and academic theologizing. I broached the subject. “This place is kind of, well, strange, isn’t it?” I offered. At first, I don’t think he was sure to which kind of conversation I was inviting him. Like so many we have encountered here, he did not want to give offense to this visitor to his country, or the host of the dinner.

Yet, when I began to describe my own unease, it seemed that he understood that our conversation would take place outside of normative manners. He accepted my invitation and for a few minutes, we shared our own uneases, each different from the other, but common enough to resonate. Common enough to give at least me a chance to see and feel and name the aversion more clearly, which gave it less power over me, which de-centered it, making room for a new friendship and a few moments of shared kindred sparks to emerge.

The residue of this vivid experience woke me in the middle of the night to write about it, and thus crowds out all other pleasant experiences of the evening (of which there were many). Part of me wishes I had stayed in the van. Certainly, “next time,” I will.

Still, I will say my prayers of gratitude for the conversation with my colleague and new friend. I will say both my thanks and my apologies to the Padaung women — may their lives be so much fuller, and real, than the one-dimensionality to which we were exposed last night. May they know joy and empowerment in their lives. May they have the personal and social ability to name what they will and will not do, in all aspects of their lives, including employment, including interactions with patrons of the floating place restaurant. May they be known to the depth of their souls by someone who loves them. May all those who view them, actually see them — behold their true beauty, their inherent worth, their human dignity.