For three days, we are in the Bagan region, which is like walking amid a ten square mile swath of thousand year old ruins. I should be more accurate. It’s not like that. It is that.

We spent the day touring various pagodas and temples. We finally learned the difference between those two terms, which have vexed most of us on this trip. A pagoda (which is also stupa in the Pali language) is built solid — there is no going inside for there is no inside, except at its heart, where there is typically a relic related to the Buddha. His tooth (or a replica). Three strands of his hair.  Something of that nature.  It is in the shape of a tomb.

A temple, however, is in the shape of a home, for it is where statues of the Buddha are housed, and where people can come to venerate the Buddha. Temples are structures one can enter — there is an inside there. Not to confuse things, but there are edifices that are a combination of both.

There are over three thousand of them here. Temple, pagoda, stupa — whatever you want to call them. Three thousand one hundred and twenty-two to be precise. They dot the landscape. They rise up on the horizon. Yes, large and looming ones that attract tourists like ourselves, and pilgrims. But also small ones, like large free-standing chimneys. Most are made of red brick, though some (the really gigantic ones, the ones made not by regular people, but by kings and other wealthy people) are made of other materials, like stone. All built between the 9th and 13th centuries, until Kubla Khan’s armies ended the Bagan kingdom.

It feels slightly sacrilegious to write it, but they litter the dirt roadways — we drive past them like we are driving past a gas station in the States. The eye accustoms itself to their presence and the awe, sadly, lessens. It helps to gain elevation — to behold the vastness from a high-up place.

We climbed one. Its name was Shwe Zedon. There are only two that people are officially allowed to climb. We began our day this way. We had planned to return for sunset, which is supposed to be spectacular and awe-invoking, but rain has arrived here, so that did not come to pass. The stairway was steep. The steps were uneven, some about a foot and a half high, some a full two feet. So each lifting of the foot required full engagement of a high knee lift. These steps were also narrow; one could, perhaps, place a forward facing foot fully on it, but more secure would be to turn the foot sideways. 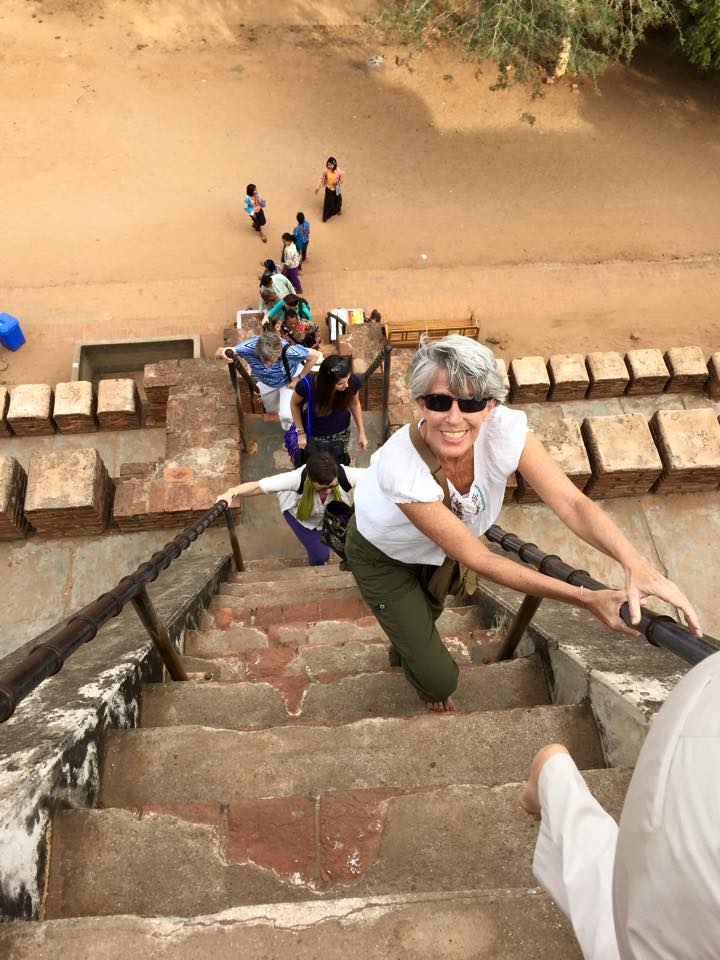 Thank goodness for the invention of the handrail (not original to pagoda, but a kind afterthought for people like us). Climbing this mountain of stone taxed my penchant for height-induced vertigo. Still, I am not about to miss out on something like this. Facing fear is one of my spiritual practices and thus, I climbed. Something like sixteen stories high.

That elevation provides perspective — how small we are, how gigantic they are. How very, very impermanent my life is and how less-so, but still, these edifices are. How minute I am, how vast the universe.