777 steps up Mt. Popa, 777 steps down, most of which were, barefoot, amid monkey urine and poop

There has been a request for further elucidation.

Mt. Popa is in the Bagan region – a two hour drive from the old city of Bagan. Mt. Popa is an extinct volcano. The area around it is lush, the soil fertile. There are 120 varieties of birds, 100 varieties of butterflies, and 340 varieties of trees. Verdant? Yes, verdant – so very contrasted with the dry, dusty landscape of Old Bagan.

We rode our tour bus two thirds up the mountain, taking hairpin turns barely made for a vehicle of that size, but our driver was capable (and I was carsick). We ate lunch at a resort with views to die for — the whole valley lay out before us. The reason we had this specific locale on our iti 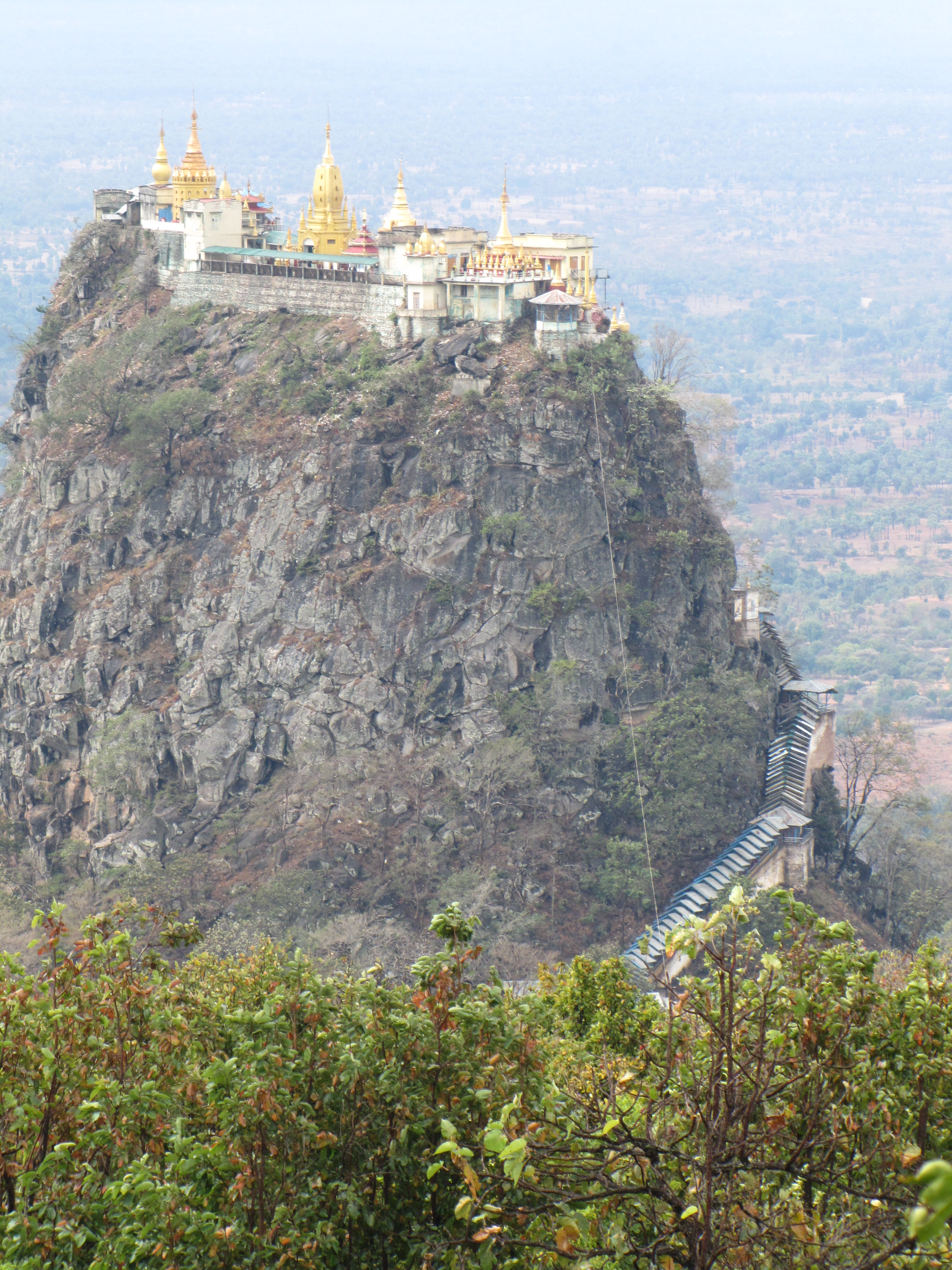 nerary was because of what could be seen in that vista: Taung Kalat.

Taung Kalat is a precipitous volcanic plug that arose, somewhat at a distance, from Mt. Popa but emerging from it, a thwarted eruption of magma through a volcanic vent that hardened before surfacing. Not only is it compelling as a natural phenomenon, it is considered by the locals as a spiritual power spot for those who practice the Nat religion.

Nat is an animistic religion that I am still very much trying to understand, without much luck. Natural, but inanimate, objects are inhabited by spirits. I have read that these are often not kind, happy spirits, but possibly humans who have died and been stuck in transit. They act as guards and they must be appeased. Throughout all of Myanmar, there are signs of people practicing Nat worship — simple shrines with pots, sometimes with flower or banana offerings, stand at the entrance to residences and buildings or along the roadside. There seems to be no significant sense of competition or threat for Buddhists to also practice Nat worship. And in the tiny Pwo Kayin village, which was Christian, I saw signs there, too.

At Mt. Popa (it seems that both the mountain and the volcanic plug are referred as “Mt. Popa”), there are signs not only of Nat worship, with numerous shrines. There are garishly painted human figures to whom our guide referred to as Buddhist saints who attained enlightenment on Mt. Popa. (This is where my confusion enters in — what is Nat, what is Buddhist?) There are rooms, colorful, often with mirror mosaics, offerings of food, clocks, and a myriad of other items, with these figures in them, sometimes with a statue of Buddha involved, sometimes not. Some of these figures have monetary offerings stuck to them — placed between their fingers, in the pockets of their clothes — if it is possible to attach it, human ingenuity has found the way.

To reach the top of this volcanic plug, there are 777 steps spiraling up the side of it. The steps are covered with corrugated tin roofs, which offers some protection, though on the day we mounted them, the drizzling rain made the steps wet and slippery.

Not cute monkeys. These were not quite Planet of the Apes monkeys but they came too close for my comfort. For sure, they evoked far more of a fear reaction than an affectionate-I-wish-I-could-hold-you reaction. More like a please-God-let-me-get-through-this-without-contracting-rabies reaction.  Maybe Wizard of Oz monkeys, which are scary enough.

Inhabiting the mountainside, these monkeys have found that people carry fascinating objects, often dangling from their hands or from their necks. Plastic bags. Cans of soda. Cameras on straps. In my case, I was not dangling anything, but wore a plastic rain poncho which one middle-sized monkey decided should be his. Our chivalrous guide was mostly able to keep the monkey at bay, though at one point it ran down the stair rail to which I was clinging and ran the length of my arm, giving me quite an unpleasant startle. 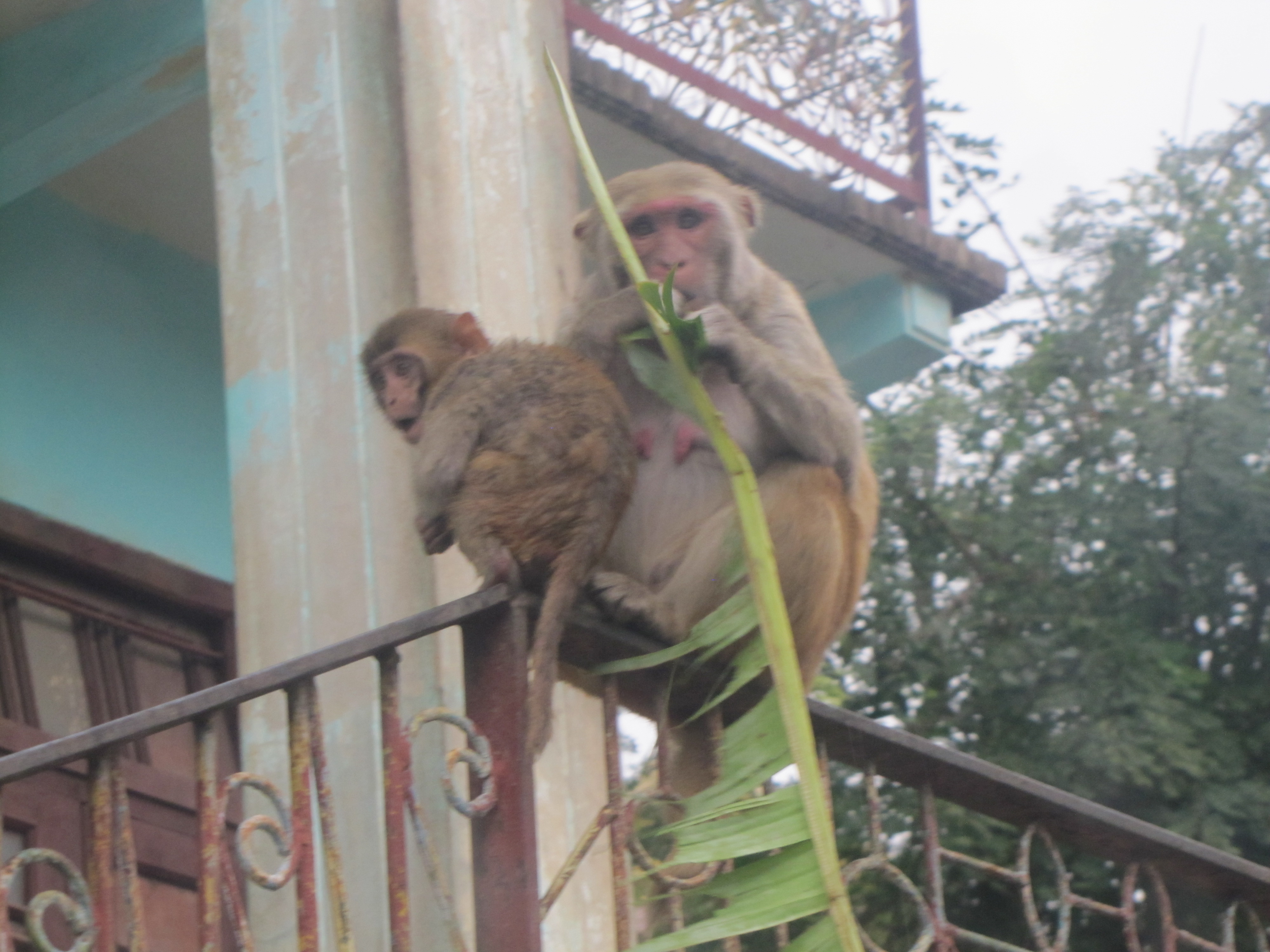 Given that they inhabit the stairway with no apparent human attempt to suggest they do otherwise, this means the steps are covered in a mixture of monkey urine and monkey feces. Add to that the rain from the day and there was no avoiding it.

Which is all fine and good, but add one more element: at the top of the stairs is a Buddhist monastery, and like at all other Buddhist monasteries and pagodas in this country, to approach it and walk on its ground, one must remove both shoes and socks. Yes: one walks barefoot amid the monkey “poo-poo and pee-pee” as our guide called it.

For sure, things could be way worse.  We got through it, though there was one injury that resulted in stitches.  It was not monkey-induced, but rather the bad luck of slippage on a rainy day.

2 thoughts on “Barefoot Amid Monkey Poop in Myanmar”