(Earlier today, I sent this letter.  I comment about the response at the end of this post.)

Superintendent of the Massachusetts State Police

It is not an easy time to be a police officer in this nation.

It is a time when there is necessary attention to how the wound of racism festers in all aspects of our communal life together.  This light must shine on all of us; the spotlight is shining particularly brightly on police relations and actions.

Even if this is necessary (which I believe), it is not easy.

So I want you to know this story.  I hope you will pass it onto the state trooper involved.  Because it is not an easy time to be a police officer and yet we need you all to continue in your role.  Just as we need you and we need ALL of us to grow and improve, to be humble, to know our places of fear and to move through them.

Yesterday evening in Newton there was a planned march addressing concerns about police brutality, gun violence, and the loss of life of Black and Brown men in our nation.  The march started at Myrtle Baptist Church and ended at the First Unitarian Society of Newton.  State troopers were present to keep the march route clear and to respond as necessary to whatever might arise.

I was one of the marchers.  I am a seminarian at Andover Newton Theological School. Early in the gathering of marchers, I befriended a stranger, an elder, who was also marching.

It turned out that the route and frigid air were too much for this woman, who struggled as we crossed the overpass that spans the Pike.  She needed rest and it became quickly obvious she would not be able to complete the route by foot.  A few other marchers came to her aide, one of whom approached Trooper Responsive, who was nearby.

Trooper Responsive offered immediate and compassionate assistance to this woman.  He spoke to her clearly and kindly, he respected her concerns, and he offered to give her a ride to the location where the marchers were gathering to listen to speakers.   He allowed me to ride along, as going on her own would have been too daunting for this woman in her state.  Neither Trooper Responsive nor I are from this area, so he took directions from this woman as she warmed up and rested.

I have written a story (blogpost) about this.  You are welcome to share as you see fit.

Please pass on my deep gratitude to Trooper Responsive. 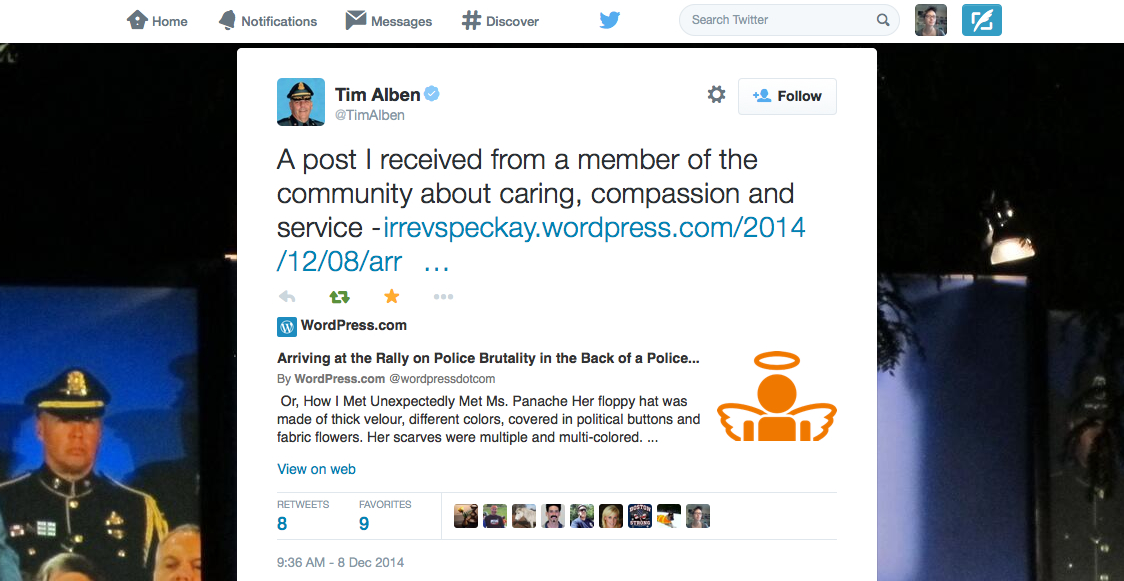 Within a half hour of sending the above letter via email, I received a positive response from Colonel Alben, including his letting me know that he would share my remarks with “Trooper Responsive.”  Colonel Alben also tweeted my blog post on his twitterfeed.  His tweet has resulted in hundreds (that’s big numbers for me) of people viewing the original story — folks I am pretty sure would otherwise not read this blog.  For that I am thankful.