“Sexuality is who you go to bed with.

Gender identity is who you to bed as.”

So sayeth the authors of The GENDER Book at a workshop I attended last night.

In the summer and fall of 2010, there was an unprecedented rash of suicide deaths of gender-variant youths in this country. Yes, there are higher rates of self-injury and death by suicide by young people who identify on the GLBTQ continuum, but to my (limited) knowledge, it was not clear why so many in such a short period of time. For whatever reasons, this concentration of unnecessary deaths could not be explained away by increased media attention.

Though there were already organizations and individuals trying to address the problem of increased vulnerability to violence, bullying, homelessness, and economic scarcity, new responses to that call emerged. One was Dan Savage’s widely-heralded It Gets Better Project (which has its detractors, too, because sometimes, it doesn’t get better, or sometimes, it get more better for gay white men than for trans* people of color).

The workshop took place in the main chapel at my seminary.  Yes: in the chapel of a seminary. This is holy work.

As clergy and clergy-to-be in liberal religious traditions, as people of faith and conscience, we are called to understand how gender and sexuality and sexual orientation and identity function (on their own and at their various intersections, as well as with intersections of other important cultural markers, like class and race).

We are called to engage folks in compassionate conversations, wherever they or we are on the gender continuum.

We are called expand our personal and denominational horizons in the realm of human sexuality.

We are called, over and over, to learn the lingo, which shifts and changes like the fluid topic it is trying to describe.

When my mother gave birth to me, the doctor said, “It’s a girl!” All my life, I have felt this was true. This means that the label “cisgender female” describes me – in fact, it

’s the one I chose when Facebook changed their options from male/female to a long list (over 50!) options.

This isn’t true for all people – the genitalia with which they were born on the outside may not be how they experience themselves on the inside.

I had already learned that like sexual orientation, gender identity exists not on a either/or system (he/she) but on a continuum. I know this to be true based on my experience of sexual orientation as a bisexual person in the world, so it makes sense to me that gender exists outside the binary system. The folks at the GENDER book call it the “gender spectrum:”

A continuum ranging from the extremely masculine to the extremely feminine, including also the infinite number of gendered states in between. More inclusive, but not exhaustive of all gender possibilities. 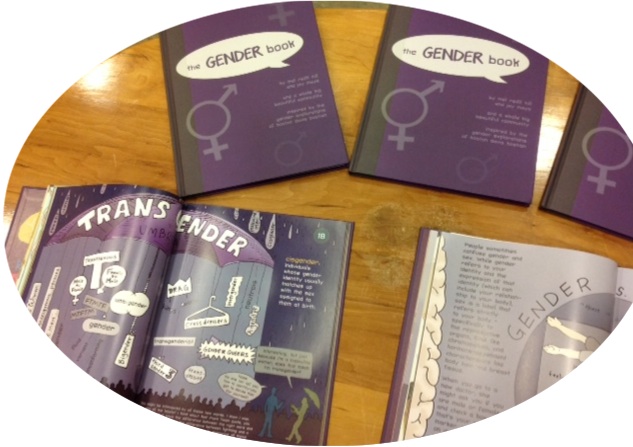 Created by three awesome individuals, the illustrations are cool, the information is timely, the content is based on real lives sharing their lived experience with all of us so that we might be more likely to embody Beloved Community. I recommend this book. Take a look here.  There is even a 6-page version that one can print out and share widely as an educational and awareness tool.

On a final note, while the fine folks at the GENDER book were writing and drawing and trouble-making, my response to that horrendous spate of suicides was the poem below. It’s not nearly as cool, but it’s my contribution to that tragic moment in history:

The Harpies, feeding then upon its leaves,

Do pain create, and for the pain an outlet.

let them be sickened

should they try to land

without ever meeting you,

those who denounced you

before you were even born.

This knotting and twisting

we inflicted upon you

in this worldly hell,

of who should love whom,

may it have ended the moment

you took your own life.

May you find the friends,

the allies, even the foes,

who know your true light,

not only the peace,

not only the justice

but the loving lover

meant just for you,

meant to make you

laugh ‘til you cry

and when you are crying,

May you find that lover

meant to hold you,

to embrace the all of you,

the whole of you,

the queer of you.

3 thoughts on “The Gender Spectrum: A Workshop, A Blogpost, A Poem”