I am supposed to be moved to write something, or say something, or craft some response to the news from Ferguson, Missouri. Something deep or inspiring.

Instead, I am stunned. And sad. Existentially fretful. Deeply discouraged.

I have nothing new to add to the cacophony.  And as I go to publish this post, a police car is on fire in Ferguson.

So I cannot be silent.  What did Dr. King say?  We cannot afford the luxury of despair.

The grand jury convened and tonight announced that the killer of unarmed Mike Brown will not be held accountable. Official word is that there was insufficient evidence to indict. That an armed white police officer shooting an unarmed Black man multiple times does not even warrant a trial and a full airing of the evidence.

As was tweeted earlier this evening 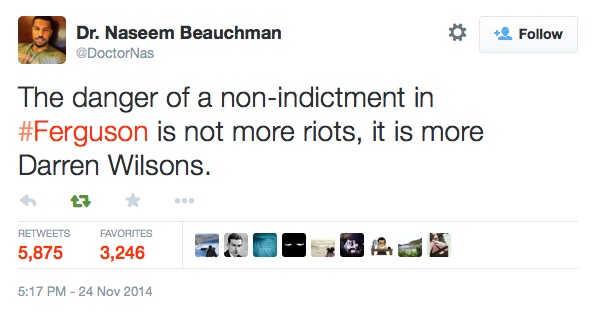 It is hard for me to see anything but the truth of that statement.

I survey my Facebook newsfeed and I see questions of “How could this happen?”

I watch my Twitterfeed where that question is barely posed, but tweets like “shocked, but not surprised” and “The system ain’t broken. It got exactly what it is built to produce” abound.

“We are profoundly disappointed that the killer of our child will not face the consequence of his actions.

While we understand that many others share our pain, we ask that you channel your frustration in ways that will make a positive change. We need to work together to fix the system that allowed this to happen.

Join with us in our campaign to ensure that every police officer working the streets in this country wears a body camera.

We respectfully ask that you please keep your protests peaceful. Answering violence with violence is not the appropriate reaction.

Yes. That is a difference that is within our grasp. Bodycams on every police officer, no matter where. Yes, in Ferguson/St. Louis. And yes in every town, city, and hamlet. Large or small.

Protect the citizenry. Protect the legit police officers. Protect democracy and justice and the individual worth and dignity of every person.

Did you hear about the twelve year old Black child who was killed yesterday by police in Cleveland? He had a toy gun in his hand. Of course he did. He was a twelve-year-old male child. His name was Tamir Rice. The call to 911 even said it was probably “fake.” But that child is dead now.

How do we make sure that “BlackLivesMatter?  Listen to God: 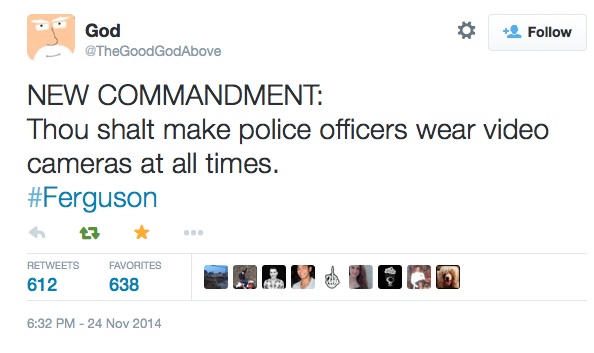 And gather together to mourn and protest.  When I wonder whether it makes any difference if we gather, I think of the story of Dr. Imani Perry and her two sons after the acquittal of George Zimmerman after he killed Trayvon Martin, in which her son cried.  So she took her son out to a rally to show those to young Black boys all the people around them who cared, who were not indifferent to the injustice, to show them and to show us we can be agents of transformation.

Let us learn the words to Ella’s Song and have it be our song of lament, for these are truly lamentable times.

And for praying folk, here is a good prayer from the Rev. Sue Phillips.

One thought on “Let's not Just Make Noise, Let's Make a Difference: On the Night of No Indictment of Darren Wilson”