November 20 is Transgender Day of Remembrance.  This blog post, some of my best Biblical scholarship, is dedicated to this day.

Let’s go back to the very beginning.  A very good place to start… 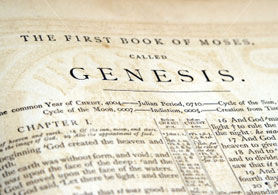 Well, let’s go back to A beginning, not necessarily the beginning.

In beginning, God created the heavens and the earth.  Then God created a bunch of other things, waters separated from waters, vegetation, night and day, a whole bunch of things.  In the second chapter of Genesis, likely written by a different source than the first chapter, God eventually creates human beings, first a man, then a woman from the man’s rib.

But in that first chapter of Genesis, the creation story is told differently

26 Then God said, ‘Let us make humankind (ha’adam) in our image, according to our likeness; and let them have dominion over the fish of the sea, and over the birds of the air, and over the cattle, and over all the wild animals of the earth, and over every creeping thing that creeps upon the earth.’

Well, the Bible wasn’t written in English, so we have to rely on various English translations, like this one, from The New Revised Standard Version Bible (chapter one, verses 26 and 27).  What is interesting about this is when this translation says “humankind” they are trying to use inclusive language because it was written in 1989.  In contrast, the RSV, which was written in 1901, uses the word, “man.”

In Hebrew, the phrase that is being translated is actually “ha’adam.”  God created the adam.    This might call to mind the Bible’s version of the first man, conveniently named Adam.  But ha’adam let’s us know we aren’t dealing with a proper noun.

Guess what the word for soil or earth is in Hebrew?  Adamah.  Earth.  Soil.  So the being that God created was not so much, or very much at all, man; that being was earthling: adam comes from adamah.  It was adam who was made in God’s image, in God’s likeness.  You following me?  Adamah means earth.  Adam was the being God made in God’s likeness, so if adam comes from adamah, it means God first made an earthling.

Okay, here’s the next step: it’s the next line in that section from Genesis:

male and female he [God] created them

Only after God created adam, who was in God’s image, did God then create male and female.  Two-step process.  First there was a divine genderless or gender-full earthling, created by God in God’s own divine image.  Then there were two gendered people, male and female, man and woman, Adam and Eve.

And not to confuse things, but…

…if we look to the other story in Genesis about the emergence of man and woman – that one with the woman coming from the rib of the man that we feminists love so much – something interesting comes into view. I have my Hebrew Bible professor, Uriah Kim, to thank for helping me tease this out so that I do not mislead you in our little foray into Biblical scholarship.

In that second story, when man and woman separately emerge, the Hebrew words for each of these categories is different than the ones in the first story. Rather than adam, once there are two people, it is ‘ish for man and ‘ishah for woman. Professor Kim suggests that where as in the first story, they are male and female, therefore biological or sexual identity categories. In the second version, these are gender, or culturally constructed categories.

I bring this to you not to give you a headache, but to suggest that even this ancient text written millennia ago, there was an understanding that sexual identity is not the same thing as gender identity.

Personally, I don’t need the Christian or Hebrew Scriptures to affirm this truth.  I know that my trans* friends, colleagues, and fellow humans are just as righteous as anyone else and that their presence in my life enriches my own. But I sure do want to do a damn fine happy dance (on the side of Love) when it does: the Bible actually tells us it is not perversion when gender and sexual identity are not the same.

I am even going to go a step further: that when we behold and embrace someone whose gender is something other that straight-up male or straight-up female, it might even be something more than not-perversion, but, according to this interpretation of Biblical text so therefore theologically-based, divine.

And let the people say: Amen.

3 thoughts on “In Honor of Transgender Day of Remembrance: Reclaiming Genesis”