God keeps popping up at my house.

Which is a little strange given that we are a couple of Buddhists.

It started this summer, while I was interning as a hospital chaplain, part of the process to form me as a Unitarian Universalist minister.  Now, to be a UU minister, I do not have to claim Jesus as my personal savior.  Though the title, “minister” sounds exclusively Christian, it is not.  Though some individual UU people or congregations might identify as Christian, and our historical roots are Protestant, many individuals and congregations donor identity as Christian and the denomination as a whole can be legitimately called, “post-Christian.”

So I don’t have to have a close and personal relationship with Jesus.  And I do not even have to affirm a belief in God.  Or god.

This is especially convenient, since, as I inferred earlier, the strongest influence on my spiritual practices and theological bent, are strains of Western Buddhism – and though there may be nothing precluding god there, there’s also not a lot of attention to the Divine.

Yet ever since I spent three months hanging out with the critically ill, the dying and the dead, and with the newly grieving, god keeps creeping into conversations between me and my partner.

At first, it was stories about my chaplain intern peers, most of whom have personal connections to god.  “God” was an easy word for them to say, a powerful presence to evoke, and often a source of comfort and guidance.  While honoring and respecting their theologies so very different from my own, I struggled honestly and explicitly with what that meant or could mean for me.

I didn’t think I would become a god- believer.  Truthfully, I just don’t think I’m built that way.  But I did wonder what I might be able to glean for myself from their faith and their experience of the Holy.

It turns out, and I knew this before embarking on my chaplaincy experience, I may not know God (or god), but I am a big fan of the Holy.

Or the Transcendent.  Or Sacred Glue.  Or That Which Is Greater Than Ourselves.  There are lots of names which point in the general direction that can never be fully named.

One of the ways I struggled with the implied notion of god was around Divine Intentionality.  One of the most favored expressions among my peers was, “the right chaplain always shows up.”  This is very comforting when you are a total newbie and about to enter the ICU to sit with a family whose only son is on life support; or when you are the one carrying the beeper for the whole hospital, answering all the calls for trauma emergencies; or that same beeper will wake you in the middle of the night to hold the angry/anguished family after their daughter/sister just died of a drug overdose.

So everyone glommed onto this adage and its inherent wisdom, offering it as a pep talk at the start of a 24-hour on-call shift.  Everyone, except me.

I was, it will be no surprise to those who know me, the skeptic in the group.  I would inconveniently ask, “What about all the Spanish- speaking patients who number too many for the one Spanish-speaking staff chaplain? Are they getting the right chaplain – which would either be someone whose Spanish was mediocre or was assisted by an interpreter or got no chaplain at all?”

My own experience of learning at the expense of patients is an indicator that it might have been the right experience for me, but surely not for them (who got an ill-informed intern who was all thumbs).

So this idea that god ensures that each patient gets the right chaplain every time seems far-fetched, at the very least, and self-serving at its worst.

So, with my skepticism fully I hand, my partner and I, unconsciously, yet with a holier-than-thou tone, began to attribute all our good luck to god.

God meant for us to find the most opulent AirBnB option on all of Cape Ann at a bargain price.

God meant for you to leave me the last Klondike bar in the freezer.

God needs you (definitely not me) to take out the trash.

It was our way not of embracing this problematic notion, and not embracing god as well, but resisting them both.  It was clever and embarrassingly arrogant.

A decade or so ago, when I still claimed the title of atheist proudly, I was looking through a catalog; in it, there was a wall plaque I found compelling.  I couldn’t tell you why I was drawn to it, but lucky for me, I didn’t resist.  I bought one for myself and one as a gift for a friend. It hangs in my bedroom.  On it is inscribed, in Latin, the words from the headstone of the psychoanalyst Carl Jung: 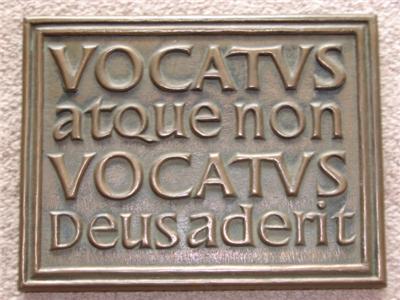 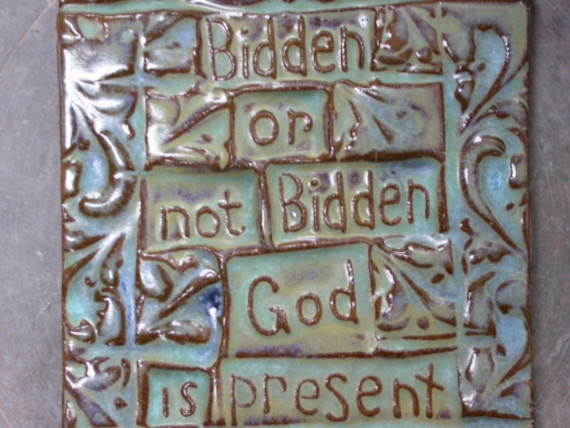 Strange thing for an atheist on a social worker’s salary to spend her precious funds on, but, as they say, god works in mysterious ways.

Returning to the present day, I am noticing a shift in my voice, and perhaps even in my partner’s.  (Well, not in my partner’s.  That’s just projection.)  Just a bit.  Not a full out transformation.  When we make our clever jokes about god’s presence in our lives, the mock and the snark seems to be dissipating.  I can only speak for myself, but there seems to be more of an open question than an outright dismissal; a “who knows” rather than  a straight-up defensive posture.

The word isn’t so charged as it was before, leaving room for god to be something other than limb-ridden and narrow, a god who saves parking places for lucky bastards while allowing free-lance journalists to be beheaded.

(I know, I know, you god-believers want to chime in now about Human Will.  About the presence of evil.  But to my mind and heart, if it is god’s will that one person survive a car crash, then it’s god’s will to let a child starve.  You can’t have it both ways.  If god is truly Love -with a capital L – then it’s a kind of love that is fierce, awesome, devastating, and profoundly ugly…as well as redemptive, generative, merciful, and mysterious.)

I don’t know where this having god as an additional housemate is going to lead.  Not too long ago, I apparently referenced god in the course of a casual conversation with a UU friend.  I didn’t notice, but she did (pleasantly so, I think).  So I guess god is showing up not just in conversations at home, but elsewhere in my life.  Maybe it will serve this purpose, so aptly described by Jeanne Harrison Nieuwejaar, in her book, Fluent in Faith: A Unitarian Universalist Embrace of Religious Language:

“We need God language to awaken the imagination; to point, not to name; to help us to move beyond material realities to the meanings of life and of love, to the truth that there is more of beauty and care I this world than we can comprehend or capture I our scientific explanations.”

When I have an opinion on the subject, I tend to side with those who advise that if you look, you can find god anywhere and everywhere.  And if not god, then That Which Is Holy.  Or traces and echoes and lingerings of it.  Most certainly one can look upward, but also be sure to look all around, as well as inside and in the eyes of another.

And maybe, just maybe, if you are having a particularly hard time of it, you should come over to my house.  Who knows who or what you just might find there.

4 thoughts on “Bidden or Unbidden: God in the House?”