As one of my colleagues introduced himself on the first day of class, he said he pastors a church in…my hometown!  This is a surprise to me on many levels, primarily because he, and his church, are African American Pentecostal.  If you have ever been to Northampton, you know how few people of color, particularly African American people, actually live here (for the 2010 census, it shows 2.72%) — as a community, it’s one of our biggest deficits.

Plus the town is kinda known for our liberality, including liberal religion, of which Pentecostals are generally not counted.  I introduced myself to this pastor and co-seminarian on one of our breaks, we ended up in a working group during class, and have formed a beginning friendship that included an invitation to visit his church.

Fast forward a few days to this morning, Sunday morning, when I found myself stoking my courage to cross the threshold of the unfamiliar, entering into a new church, a Pentecostal church, an African American Pentecostal church, and there is no hiding that I am a guest.  Yes, I am the only white person in the small chapel, rented from the big, struggling church on the Main Street of town.  But it’s not just race.

I don’t know the songs.  I don’t know when to say “hallelujah” or “praise God” and even if I did, I would not feel comfortable doing so.

I don’t know the scripture, both in content, or the King James Version from which they are reading.  I am not used to Bible study before the pastor arrives, in which there is talkback and read-aloud (though I have seen this before, so it was not completely foreign).  I am not used to the portion of the worship when there is testifying, though I have to say, I loved listening and I loved testifying myself.

I am not used to the pastor, who in real life is probably six-and-a-half feet tall, becoming what seemed like ten feet high when his voice boomed and the preached (shouted, sang) the Good Word.

Both my spiritual homes – New England Unitarian Universalism and Buddhist meditation – nearly require either encultured and stoic (New England) or intentional (Buddhist) stillness.  I am not used to worship that is embodied – movement, not just standing up and down in the pews, but clapping, and swaying; being moved to affirm what is being said, not just with my words, but with my whole body.

So when my new friend and colleague, without warning me, asked me to come to the front of the chapel to speak to the congregation about a social justice event next week to which I wanted to invite them, their welcome and their energy allowed me to stand up and to preach, extemporaneously, for the first time ever.  I have preached without a manuscript, but that takes days of research and rehearsal, much of it planned out.  This was genuinely extemporaneous.

I felt buoyed and capable and perhaps even held by the Holy Spirit.  (I’m not saying it’s true, just possible, and that’s enough for me, especially if I am going to do this interfaith work.)  It was a moment in my ministerial formation that I hope I never forget.

That said, I must have used all my skills and grace on that moment, because after I returned to the pews, it got all kinds of awkward.

It was time for communion.  My pastor friend had already told me it was an open table, which means that anyone can take communion.  I have come to like communion and in some churches, have been moved deeply by the experience of it, so I was gladdened to take part in it since I will not take part in communion that is restricted for whatever reasons.

I focused on form, not content.  This meant that I was clumsy.  For instance, when I took the little plastic capsule of red wine, my curiosity moved me out of the sacred space of the ritual.  I had never seen air-sealed, pre-packaged wine-for-communion like that.  Cool.  Mass-marketed.  Just a little creepy?  Affordable.  In the end: just fine.

I thought the top seal was a little strange and a bit unwieldy.  I saw others being delicate with opening it, struggling a bit to break the seal and not spill the wine.  I worked mindfully at this task, thinking they must distribute the wine first, then hand out the bread.  As I am tearing off the seal, it begins to dawn on me that its white color is not some strange design flaw, but is, in fact, the communion wafer sealed atop the seal for the wine.  It’s a twofer. 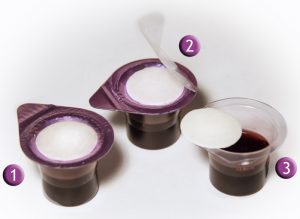 Except that in opening the wine, I have broken the seal, which means that my communion wafer is now in two pieces.  Only from urban legend do I know that this is a bad thing.  A very bad thing.  Perhaps even a damnable thing. So I don’t want anyone to see that I have broken the body of Christ.  I mean, theologically, it had already been broken and Jesus himself, according to at least one of the Gospels, said it, or something like it, so it’s not like I could really break it, at least not for the first time.

As I am fumbling to hide my transgression, something worse happens: one half falls to the floor.  And this is where my prayer for the five-second rule comes into play.  I’m not sure what I said but I’m pretty sure rather than being a vehicle for Jesus or the Lord I was probably channeling Kate Braestrup or Nadia Bolz-Weber or, really most likely, Anne Lamott.

If anyone noticed, they didn’t hold it against me.  If anyone was offended, they kept it to themselves.  Several of them took the time to reach out to me after the worship to greet me and to let me know they will come to the social justice event of which I preached.  They asked me to return.

Broken wafer or no, I feel washed in their blessing. 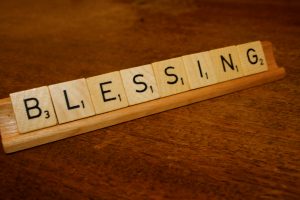