“A chapel is where you can hear something beating below your heart.” Pico Iyer from “Where Silence is Sacred” 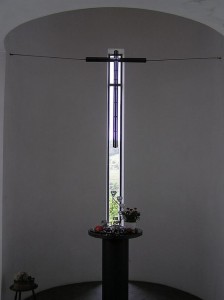 Bingen am Rhein is part of UNESCO’s world heritage designation for the Upper Middle Rhine Valley that is considered having “outstanding universal value.”  Bingen was made famous by the Christian mystic, Hildegard of Bingen.   Known and revered in her own time (12th century), Hildegard was a determined and faithful abbot whose visions produced great art and music; led to new understandings of medicine, healing, and worship; and brought to her founding a new monastery.  That monastery, Rupertsberg, was destroyed several centuries ago, so visceral connection is lost to us moderns.

However, the monastery where she first became a nun – an anchorite at the age of 14, living in a strictly confined physical space with rare contact with the outside world – still exists: the ruins of Kloster Disiodenberg or the Disiodenberg Cloister.  After visiting the quaint, and tourist-focused museum about Hildegard in Bingen, where I large reproduction of the image below (Hildegard receiving one of her many visions from God, then being scribed on her behalf),  my friend and I decided to drive the hour to Disiodenberg.

I had already traveled a good thirty-seven hundred miles (as the crow flies).  What’s an extra 40 kilometers?

The cloister is on top of a mountain – or, if you are from the West Coast of the United States as I am, on top of a large hill – taller than any nearby.  Once there, we learned that the ruins are privately held by an Italian family, which has passed the property down through the generations.  On the land there is a larger building that I believe might be a winery – its back was to us, and I had little interest in it.

There was a small, cozy museum at the end of a winding road that ends as a dirt path, which is what we drove to get there.   It turns out that this museum had been closed for several years, due to lack of interest and lack of funds.  It had recently been re-opened due to renewed interest in Hildegard since the Catholic Church finally got around to making her a Doctor of the Church in October, 2012.

When we arrived, it was already late evening.  Since it was mid-summer, the sun would not set for another four hours so we had time to explore.  The door to the museum was open, but no one seemed to be there.  Then, a middle-aged, blonde-haired woman appeared in our field of vision.  She seemed to be weeding near what appeared to be an entrance booth.  On the other side of the booth one could see a dirt road and discern farm fields with goats or sheep in them.

Perhaps we wouldn’t need chapels if our lives were already clear and calm (a saint or a Jesus may never need to go into a church; he’s always carrying one inside himself). Chapels are emergency rooms for the soul. They are the one place we can reliably go to find who we are and what we should be doing with our own lives—usually by finding all we aren’t, and what is much greater than us, to which we can only give ourselves up. (Pico Iyer)

The woman  — Ulrike Lindemann – turned out to be the caretaker of the ruins, hired just four months previously.  She asked what the reason behind our visit.   When we said, “Hildegard,” a gleam entered her eye and glow came to her whole countenance.  Apparently not everyone who visits the ruins is interested in Hildegard; since that was not our case, it gave Ulrike the chance to demonstrate both her generosity and knowledge of Hildegard, which was stunning.  So the first 30-40 minutes of our visit was spent in a heavenly personalized tour of the museum with recommendations for what to look for when we climbed to the actual ruins.

The ruins were magnificent, mostly because there were stone walls in some places, and in others, the forest had reclaimed the space completely.  Some of the walls were tall, with windows in them, several floors high.  Sometimes, only the barest outline of the outer walls of a building were discernible – foundations straining to maintain a continuation over the centuries.  In the church part of the ruins, the ea 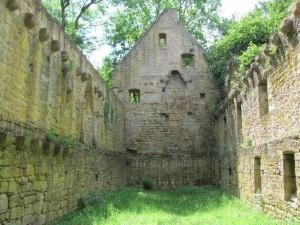 rth had reclaimed not only the walls and ceiling of the building, but also the floor – not only that it was no longer present, but that soil and living plant matter had filled the space and raised the floor so that inside the building did not seem as tall as outside.

Among the ruins were three large oak trees, growing in close proximity, about which Ulrike alerted us.  She told us they had been dubbed, “The Trinity,” (Father, Son, Holy Ghost).  Tradition has it that if one stands in the middle of them, one can obtain a stillness found few other places.  I tried it: standing in the center of these old, stubborn trees, but found no particular stillness or sacredness different than the rest of the place.   Though this might seem like a natural chapel, and apparently others have experienced in that way, I did not.

Ulrike had told us that the mountain upon which the cloister was built had strong magnetic energy, stronger than any other in the region.  She said it had something to do with the geological make-up of the materials beneath the soil.  It is impossible to know whether it was the power of suggestion, or just the plain truth, but in a particular corner of the ruins – about halfway between the church and the graveyard – the bones of my chin and jaw, then eventually my forehead vibrated in a way I have not knowingly experienced before.  So something from deep within the earth was resonating my bones, but it was not my heart finding a deeper heartbeat underneath.

A chapel is where we hear something and nothing, ourselves and everyone else, a silence that is not the absence of noise, but the presence of something much deeper: the depth beneath our thoughts. (Pico Iyer)

The chapel I found there was actually a chapel, though not one from Hildegard’s time.  It was a chapel whose appearance I first found ugly and off-putting, and one I nearly shunned altogether.

Hildegard has many modern followers: people – largely women – who keep her story alive, who celebrate her achievements and contributions, who ensure that her voice and visions are not lost.   One of them built a permanent chapel in 1997 on the land where the ruins of Disiodenberg Cloister stand.  The chapel is called Hildegard’s Kapelle (Hildegard’s Chapel).

From the outside, it looks like a concrete submarine.  Which is to say, it looks hideous.  Upon nearer approach, its aesthetics are so antithetical to the land on which it stands, the surrounding ruins, and a contemplative state of mind, that I nearly walked away from it.  It was so garish, and my aversion so strong, I could not imagine it worth my time.

Spiritually healthy or not, many of the decisions I make come in answer to the question, “You may never be here again.  How will it feel for you to walk away or to choose one way or another?”

When I look back on my life, the parts that matter and sustain me, all I see is a series of chapels. They may be old or young, cracked brown or open space; they may be lectories or afterthoughts, hidden corners of a city or deserted spaces in the forest. They are as visible as people. But like people they have a stillness at the core of them that makes all discussion of high and low, East and West, you and me dissolve. Bells toll and toll and I lose all sense of whether they are chiming within me or without. (Pico Iyer)

Standing close to this unattractive building, I asked myself that question.  Then I asked my friend if she would busy herself while meditated inside.  She graciously accommodated and I entered.

The chapel was in the shape of a semi-circle.  The part I saw – the plain, unremarkable exterior walls — was the curve.  The flat part of the half-circle was what one walked toward when one entered the heavy, unlocked door.  That wall was largely window that opened onto the hillsides across the lower valley: a spacious, verdant landscape, part farmland, part centuries-old vilages, that seemed only an arm’s length away. 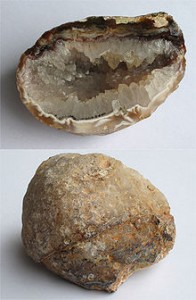 I felt like I had walked into a geode: unsightly on the outside, splendid on the inside.

Along the curved wall, there were simple wooden seats.  At the center of the straight wall there is a section of no windows, except a sliver, with an altar in front of it.  The altar held a single lit candle and a throng of offerings left by other pilgrims. 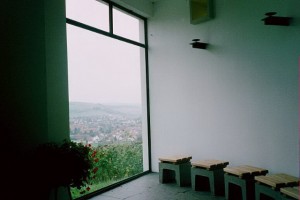 And I listened to that something beating beneath my own heart.

Thank you to Reverend Rob Hardies for my exposure to the Pico Iyer article that leads this blog post off.  He used a quote from it in his sermon on Star Island, New Hampshire, today.

5 thoughts on “The Beating Beneath My Heart: A Geode of a Chapel Amid the Ruins of Disiodenberg”