Above is a link to my first attempt to audio record and post my sermons.  Please forgive clumsiness as I learn.  Below is the prepared sermon, which is mostly what is on the audio version, minus stuttering and mis-speaking and a few other mishaps. 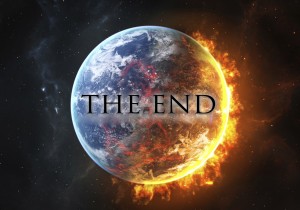 With last year’s supposed end of the world as foretold by the Mayan calendar (or lack thereof), one might think we would be done – at least for a little while – with the topic.

Nope.  As the Sacramento Bee newspaper proclaimed last month about a bevy of summer movies: “Hollywood loves a good ending – open parenthesis – of the world – close parenthesis.”  Just this summer, there is

And those are only the comedies.  Because we were also gifted (and I use that term generously) with

And I’m not even counting the end of the Universe stuff, like Star Trek’s Into Darkness.

And do we count the end of the United States of America?

And the most pressing question of all: where does Iron Man III fit into this?

So the question isn’t really who doesn’t love a good ending (of the world), at least in movies, but why do we visit and revisit this topic, over and over?  And why now?

Let me get one thing clear.  Though many conversations about how messed up the world is, turn to blaming, this sermon is not interested in that.  This sermon is particularly not interested in the oft-repeated version of that blame game that involves millennial-bashing, in which the older generation (when did I join the older generation?) blames the younger ones for the mess of the world.  In fact, it’s quite the opposite.

For those trying to catch up on all these names for generations, besides the Baby Boomers, and the Gen-Xers (that’s me!), there’s Gen-Y or better known as Millennials, born between 1980 and 2000 (or some say 1984-2002 – this generational naming thing is more an art than a science).

Turns out, there is a lot of Millennial-bashing out there.  Take this quote, from a rather infamous Time magazine cover article just a few months ago:

“…not only do millennials lack the kind of empathy that allows them to feel concerned for others, but they even have trouble even intellectually understanding others’ points of view.”

I not only do not share this point of view, I am betting big – betting the whole house, the whole darn shootin’ match, I’m betting the planet – that this is not true.

Matt Bors, a millennial editorial cartoonist defends his generation and stands up against such bashing by saying, “Millennials aren’t marrying, buying housing, and having kids later than previous generations because they’re sitting around trying to beat a video game.  They’re ‘delaying adulthood’ because the job market is the worst it’s been since the Great Depression.”  With appropriate cheekiness, Bors finishes his rant in the following way:

Stop hating on milliennials.  We didn’t create this mess.  We came late to the banquet and were served crumbs.  [ pause ]  Which we will Instagram before we eat.

We know it’s not just the job market, or the wider economy, that is going to H.E.double-toothpicks in a handbasket.  We’ve all got some serious worries about the health of the planet.   So maybe this is why we’re seeing all these movies.  And television or cable shows.  And zombies.  Because it’s all around us and we all – no matter the generation – are trying to make sense of it, trying to see our way out of the mess and into the light of a decent future.

Regardless of which generation you call your tribe, there are several ways we seem to be responding.  Tuning out is one.  Focusing on the pleasures of now is another.   Becoming completely paralyzed with fear is yet another.  The Unitarian Universalist Reverend John Buerhens names this dynamic for us and offers – no, implores – a different response,

“…in the face of our shared oppression of the earth itself, there is an urgency.  But it must not be one marked by apocalyptic fear [, easy forms of despair, unrealistic approaches, or an impatience that fails to persuade].  Rather it must be an urgent need to reconstruct and renovate the kind of hope that is at the heart of progressive spirituality. … But what is needed is the kind of realistic hope that can make our work together persistent, patient, and persuasive.”

You see, I believe that how we nurture this hope for a possible future is by being this hope in the Here and Now.  Though crises can trigger the collapse of all that is good, it can also be cause for people to come together in stunning ways.  Such existential crises can be a turning point, the very danger moving us toward the next existential, perhaps even evolutionary, leap.  Buddhist teacher and environmentalist Joanna Macy poses the question,

Could the creativity and survival instinct of humanity as a whole, or even of life as a whole, act through us?  Here connected consciousness stems from a widening of our self-interest, where we are guided by the intention to act for the well-being of all life.  Within Buddhism, that intention is known as bodhichitta.  Bodichitta moves our focus from personal well-being to collective well-being.

A bigger picture of change in this world emerges when we see our lives not as an opportunity for a single Instagram moment, but as part of a larger photomosaic that combines your instagram pic with yours and with yours and with mine and with yours.  Photomosiac is that art when seen from far-away, is a depiction of a single wonderful thing; but when we look closer, we see that the large whole is made of up much smaller, individual images.  The bigger picture of change emerges out of the many smaller pictures of separate actions and choices, opening up our power – your power — in entirely new ways.  “Each individual step doesn’t have to make a big impact on its own – because we can understand that the benefit of an action may not be visible at the level at which that action is taken.”  (Macy & Johnstone)

This reminds me of the message from one of our readings today about the Zeitgeist or spirit of our times.  It doesn’t just happen and we are bystanders, an appreciative or critical audience.  We are a part of the Zeitgesit of now and we are active parts in its creation:

The spirit of a time is an incredibly subtle, yet hugely powerful force.  And it is comprised of the mentality and spirit of all individuals together.  Therefore, the way you look at things is not simply a private matter.  Your outlook actually concretely affects what’s going on. (O’Donohue)

We are a part of the bigger picture, whether we want or not.

The picture we paint, or draw, or videotape, or play with our music, or blog about, or post about, co-creates not only the Zeitgeist of now, but also the future that is – at least to some degree – of our making.

Tim deChristopher is a Unitarian Universalist (Millennial) environmental activist who tried to intervene in the leasing of lands for drilling and mining in Utah.  In April, he was released from 21 months in federal prison for taking part in an auction for such leases, bidding on them without the intent to actually buy them, but to short-circuit the system.

In an interview with Bill Moyers, Tim was recently asked about climate change, about whether it meant not only that the Earth is warming, but that it is, rather, dying.  Scary, scary thought.  Here’s what Tim said:

I think both the planet and human beings are resilient. And I think there will be some kind of survival. The thing that scares me is what we will have to do in order to survive.  [I worry about w]hether we’ll turn against each other. You know, I mean, I don’t think seven billion people can survive in a climate constricted world.

We know we’re going down this path of unprecedented change. And so it’s really important who is calling the shots during that time. The collapse of industrial civilization with an ignorant, apathetic citizenry that’s afraid of their own government and feels like they have to accept what corporations want to do, that’s really scary. That’s really ugly. And that’s, I think, the big challenge that we face now.

Now, not everybody agrees with this perspective, even those who acknowledge climate change.  However, more and more environmentalists seem to be coming to this point of view.

One wise piece of advice for approaching this kind of adaptive change is to “begin with the end in mind.”  This reminds us that all things are created twice: the first creation is the mental one that begins in imagination, and the second one is the physical creation or enactment.

If this world is going to end, let us imagine this world ending…and another emerging.  What is that new world, new way of life, that emerges?  Is it the world of the Hunger Games, another movie not yet on our list of apocalyptic movies that Hollywood?  Or is it something else, something more connected, with a citizenry more awake and aware, involved and engaged, making decisions on behalf of all peoples, including those whose voices of the marginalized and invisible?

How do we begin making our own movies – not only in our head, but why not on YouTube or Vimeo, as well?  The first scenes are of how things are now.  The middle scenes focus on the fact that choices you and I make, and attitudes you and I have, influence what happens next.  The final scenes are of our hope (not our fear), depicted by how the protagonists – that’s you, and you, and you, and us – can be active in moving in that direction.

It’s too late to get that movie in the big screens this summer, but we can get it on the smaller screens much sooner, …

Buehrens, John A. and Rebecca Ann Parker.  A House for Hope: The Promise of Progressive Religion for the Twenty-first Century, Boston: Beacon Press, 2010.

Macy, Joanna and Christopher Johnstone. Active Hope: How to Face the Mess We’re in Without Going Crazy,  New World Library, 2012.

O’Donohue, John.  To Bless the Space Between Us: A Book of Blessings, Doubleday, 2008.