I wrote the letter below the one and only time I have seen Rachel Maddow speak in public, at yet another community fundraiser.  At that time it was in support of the efforts of a general store called the Creamery, in Cummington, to go co-op.  The event took place in the church I currently serve, though at that time, I had no idea that I would have any future connection to the building or the community.  The picture below is of Rachel about to hug Alice, one of the then co-owners of the Creamery.  Since that fundraiser, the Creamery has successfully gone co-op and continues to be the hub of community in the Hilltowns of this part of Western Massachusetts. 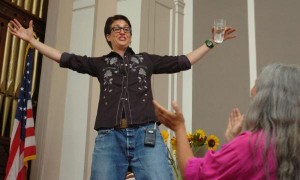 I heard the urgency and longing as she started the autobiographical preamble that is unique to her but I am guessing you have heard – in various versions – many times before, prefacing the very same question, posed to you, the very same heart-felt dilemma delivered at your feet.

I am nowhere near as schooled as you, or brilliant as you; neither do I enjoy the wide acclaim your position in national media affords you.  My life has, however, afforded me smaller-pond opportunities to dip into a similar pool of inspiration, of people holding what I say with some regard that you seem to swim in so gracefully.  I, too, have faced dear, confused, despairing people who have done good in their lives, have experienced both joy and pain, who hope for something more just in this broken, unfair world and who are stuck and sad and sometimes outraged, but often, in that moment, are full of urgent longing.

I was curious about how you would handle this tender moment.  I watched how you held this woman, a good forty feet and many rows of adoring fans between you and her.  You listened as she told you that she was marching in the streets long before you were a gleam in your parents’ eyes.  She ticked off a litany of ways in which her 80 years had been spent working for social change, strong in voice which buoyed her stature that age had bowed.  There, pleading, vulnerable – more vulnerable than I was comfortable witnessing – she implored, “Tell me what to do!”

Whether there was an actual hush in the crowd, I’m not sure, but my somewhat melodramatic mind has built it in.  I’m pretty sure those of us there knew you did not have The Answer.  Yet some of us rely on your analysis, your gift for “explaining the world” as you call it, so we were ready to hear an answer and we were ready to hear especially your answer.

And with that small, secret magical-thinking child still within us, perhaps we hoped it might be The Answer.

That’s a heavy burden.  I think it comes with the territory of having a public life, the territory of people giving your words more weight than they necessarily give to the words of others.

Full disclosure: I have to fess up that I didn’t know that you are famous for your cocktail recipes: I’m that far out of the Rachel Loop.  I did sometimes listen to your Big Breakfast radio show when you were still just a local celebrity.  I noticed when you went national on AirAmerica and felt a little hometown pride.  Then I lost track of you until the past year or two, when you kind of became a left-wing sensation and a local hero.  So I don’t fall under adoring fan or crazed fan or even I-knew-her-before-she-was-famous, not really.

I did know that you were smart.  And articulate.  And wicked knowledgeable. I didn’t know you got your doctorate in England or that you are writing a real book on a real topic.  I did know you have a particularly wry sense of humor that sends wonderful chills up and down my spine.  I didn’t know that you were kind and generous, but I was not surprised to find this out.  I had heard rumors about that: the valley is still a small place.

I did not know, however, that despite your relative youth, you are wise.

Maybe you aren’t wise.  Maybe you are just good at acting wise.  I’m guessing you wouldn’t cop to it and that your partner, Susan, might differ in the way that intimate partners know our shadow sides more than others and are less likely to make such grand and unilateral pronouncements.  But really, you struck me as wise and I don’t say that about many people.

First, as this elder from our shared community stood before you, you listened to her question.  You listened intently.  First step of a wise person: listen intently.

Secondly, you knew that the answer was in how you responded, not in what you actually said.  You say that you started off as an activist, intent on changing the world.  At some point, you turned on some unanticipated dime and ended up explaining the world the world instead.  Though I do not have the skills or wherewithal to do what you do, I’m thinking that explaining the world is easier than changing it.  I’m not saying what you do now is easy.  ‘Cause, dear god, you make really complex, important, relevant things accessible.  Just easier.

Plus, you’re pretty damn gifted at it and there must be room in the Beloved Community for all of us to live into our gifts.

Lastly, and this is what I hope you hold onto so that you can live long and prosper, what I imagine will be a daily choice you will have to make over and over, because your star is ascending and its arc is wide: you told us there is a limit of what you can give.

Not only did you tell us that there is only so much you can do, you did so bravely and with empathy, in the face of our wanting more of you.  You did so humbly, even as we did what humans do: “desperately grasp after people, places, and things, as if they can redeem us from our own suffering.”*  You did it as we brought our fear of how dark the night is growing, and how we feel you not only explain the world, you illuminate our hopes.  Talk about not easy.

You said there is no Rachel Maddow, Incorporated, and there won’t be.  You said there is no Rachel merch (though I think you haven’t been on the internet then, cause there is Rachel merch, it just must not be you who is making a buck off it).  And even though the Creamery will now have a sandwich named after you, there will be no Maddow internet channel to compete with Glen
Beck’s (though there are several of your cocktail how-to recipes online, which is pretty nifty).

You told us that one hour a day on television (and its concomitant activities) was about all you could do.  Though I must confess to the slightest shadow of disappointment, I am much more relieved to hear it.  I think you are wise for such a choice.   You are wise because it isn’t just how much we do, it’s how we do it.

Not only are you wise for it, we all are better off for it.

Because you don’t have The Answer, even if you have some really good, really scathing, really real answers.

Because we humans don’t have a great track record of treating our prophets very well.  Yeah, yeah, I know you aren’t quite yet at the status of prophet, but I think your arc might include it in a pop culture kind of way and that could get ugly on so many levels.

Because it’s not like you are making it up: for it to be done right, for it to be real, for you to do what you can do (rather than some ghost writer or some hired hand), there really is a limit to what you can do.  Especially if you want to stay partnered.  Or happy.  Or just plain sane.

Because when I am swimming in my own small pond of weighted words and empathy, whether it’s when I’m social working or ministering, I will remember that people survive when you hold them and their uncertainty, their longing, their wish for you to be something that you are not while telling them that you have something, but not everything, to meet their needs.  There’s always that momentary hush – even if it’s just within my own heart – but then we all breathe, together, and keep on keeping on.

*(Stephen Prothero, God is Not One)